It's nice to start 2011 with new heroes. Wandering through a Main Line Border's on New Year's Day, running after Kalliope's toddler meanderings, we passed the Graphic Novel section. Usually inundated with teenage boys (DC Comics) or teenage girls (Manga), Graphic Novels was pretty tame on New Year's Day. Someone had left unshelved a little graphic work that caught my short attention. Its author is my first discovery of 2011, an artist by the name of Paul Madonna. Starting in February 2004, the San Francisco Gate began publishing a weekly feature called "All Over Coffee." Paul Madonna drew architectural scenes from San Francisco's urban landscape and coupled them with texts inspired by conversations he overheard in the city's cafes. The drawings in pen and ink-wash are fabulously precise. They immediately reminded me of a similar drawing project by another graphic hero, Ben Leech, and his documentation of Lancaster. SF Gate continues to print the All Coffee Series. Today's installation for instance, is the following (click here for proper citation) 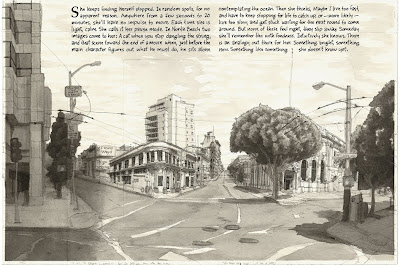 Madonna, "All Over Coffee" series was published in a book form in 2006 by City Lights, and it was this version that leaped into my attention on a lazy New Year's afternoon. Madonna's juxtapositions of personal narrative and architectural setting are provocative and have been praised by masters of narration like Dave Eggars. You can read more about Madonna and his projects in his official website here.

The fans of archaeology, urban geography and graffiti, will also appreciate Madonna's illustrations in a collaboration with Delfin Vigil, Nikko Concrete Commando. It's a true story of Vigil's search for the San Francisco tagger Nikko. The blur reads, "Sometime in the 1960s, a San Francisco kid began etching his name, NIKKO, in the sidewalks of his North Beach neighborhood. NIKKO went on to leave his mark nearly 1,000 times in the sidewalks of San Francisco. This is the true story of how, 40 years later, another San Francisco kid tracked NIKKO down by using the clues that are still in the ground today." Check it out.
Posted by KOSTIS KOURELIS at 6:27 PM

I'm glad you introduced me to this artist (although I think your stereotyping in the introduction was a little unnecessary). Looking forward to exploring Nikko Concrete Commando.