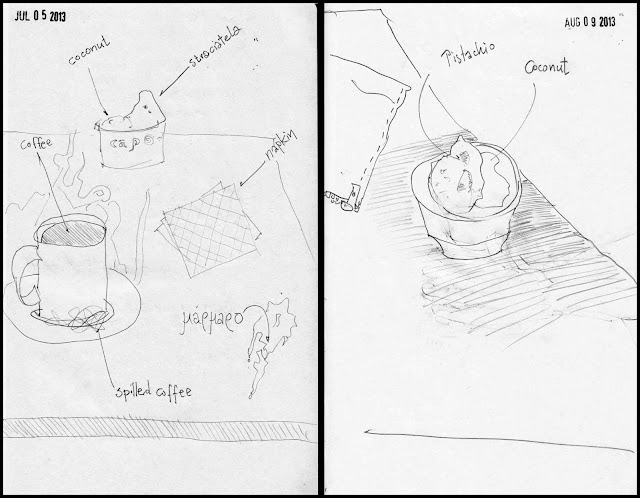 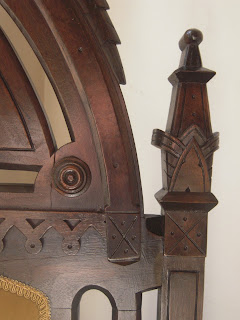 Few people know (or fully appreciate) that Franklin and Marshall College has one of the earliest academic Gothic Revival buildings in the United States (the third one in my count). Constructed in 1854, it is flanked by identical literary societies (in the Princeton mode) of two years later. What makes Franklin and Marshall's Old Main special is its connection to one of the most interesting movements in American Protestantism, known as the Mercersburg Theology, which attempted to incorporate new ideas of German philosophy (Hegel) and Romanticism (Transcendentalism). Its leading figure, John Nevin, was our college's second president. During my sabbatical leave, I took advantage of the research time afforded to me by my college to answer some fundamental questions in its architectural heritage. Did Nevin have anything to do with the design of Old Main? If not, the connections between the building and the Mercersburg Theology would be weak. I sought for an answer in the meetings of the board of trustees, and I am excited to report  that Nevin was, indeed, involved. Moreover, I discovered an alternate design scheme by leading Philadelphia architect Samuel Sloan (who designed four buildings for the College 20 years later).

Like most other old American colleges, Franklin and Marshall has distanced itself from its seminarian roots, especially after a new Seminary was built across the street from Old Main (a beautiful Richardson Revival building of 1893). The process of substituting religious heritage (the German Reformed Church) with secular ideals (Franklin's Liberal Arts) has produced the occasional white-washing and erasure through renovation. But enough remains visible to help the viewer make vivid connections. One such item stands in one of my favorite spots on campus in the tower (of course) of our Gothic masterpiece. After a suspended staircase leading to the second floor of Old Main (where the chapel is located), you will find an upholstered chair with distinct Gothic features (detail above).

Since it now stands right in front of the chapel, one would think that this chair must have once belonged to the chapel. One of the earliest photos of the altar (1892) show cathedra chairs, but they are very different from this. Conversations with the College archivist determined that we still do not know its origin. One idea is that the chair came from one of the literary societies.

Looking at the Gothic Revival furniture at the Museum of Fine Arts in Boston reminded me of the pricelessness of Franklin and Marshall's Gothic jewel. But I was also saddened by the utter disregard for architectural heritage during the chapel's 1992 renovation. The chair is located in a spot that is both intimate (away from the foot traffic of the administration that uses Old Main) but within the vertical axis of the tower. As we begin our academic semester with Convocation, I hope to visit it regularly and reflect on America's wonderful intellectual history. If
Posted by KOSTIS KOURELIS at 8:51 AM 1 comment: 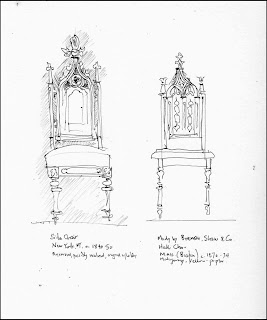 Two lovely Gothic Revival chairs at Boston MFA in the recently re-installed American galleries. Thanks to the Arts-and-Crafts movement, Frank Lloyd Wright, etc., the Gothic Revival seems to have eclipsed from American interests.

There are two similar chairs that I would love to research further, both are still in use, tucked in corners where few may notice. One is at Franklin & Marshall's Old Main, second floor landing (1856), and the other is at the gallery of Saint George Greek Orthodox Church in Philadelphia (1825). Some future posting may be in order.
Posted by KOSTIS KOURELIS at 3:25 PM No comments: 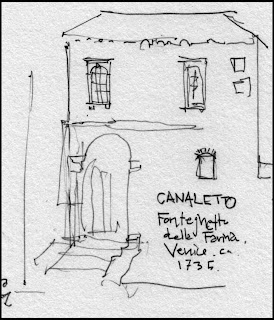 Zooming into the windows of Canaletto's Fonteghetto della Farina (one of two Canaletto's in Boston MFA), I see the clear prototype for countless American windows from the 1850s with double brackets below the ledge. I guess they don't call it "Italianette" for no reason. The painting is rich enough in its depiction of the port (immediately to the right), that you don't want to miss the asymmetrical balance of this facade. Make your choice: Athens or Venice? The Fonteghetto prefigures Giorgio de Chirico's metaphysical sensibilities.

I don't know enough about the actual building depicted. I am intrigued that another Canaletto Fonteghetto della Farina of five year earlier (in a private collection) is slightly different in the arrangement of the windows.
Posted by KOSTIS KOURELIS at 9:16 PM No comments: 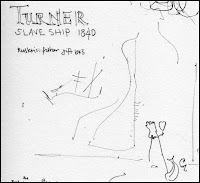 Given to Ruskin as a present by his father in 1843, this painting changed the course of cultural history. According to some, the sky as subject of aesthetic revelation did not exist before Ruskin. And Ruskin's sky did not exist before Turner's Slave Ship, now in Boston. So, thank Turner for the sky, and the clouds, and the storm brooding in your hearts.
Posted by KOSTIS KOURELIS at 10:41 AM No comments: 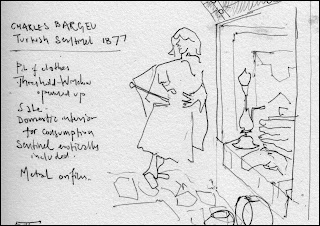 I did not known this Turkish Sentinel, or much about Bargeu (who wrote a famous drawing course with
Gérôme based on copying plaster casts). Most interesting about this Orientalist sentinel is that he is not guarding some important mosque or mausoleum (for instance, Gérôme's sentinel in Philadelphia). Rather he seduces us into domestic consumption though a "pop up" store. Not situated in a suq or bazar, the ideology of this interaction between painter, sentinel, and viewer involves household goods (cloth, vessels, carpet, waterpipe).

The sentinel opens his house for us to purchase the touristic memorabilia that we will display us trophies upon our return in the West. He keeps a lookout for we know that there is something illegal happening in this illicit place of commerce. Suggestively leaning his body on the wall, the sentinel directs the axis of meaning from left to right, through his body, towards an invisible interior that might offer additional "experiences."The wooden shutter, precariously held, might close at any moment and return the scene into an ordinary corner rather than a locus of transgressive exchange.
Posted by KOSTIS KOURELIS at 10:42 AM 1 comment:

I am surprised that Jean-Léon Gérôme's painting at the MFA Boston, Pigment Seller in North Africa (1891), does not receive more central attention in art-historical coverage. As I see it, Orientalism works on two levels. The first level is iconographic, selecting sexy scenes from the Middle East to generate in the viewer a possessive desire. Naturally, Moorish Bath (also at the MFA), or the Snake Charmer (at the Clark) are the best illustrations of this "gaze" politics (and explains why the latter was used as Edward Said's cover for Orientalism)

But the second level in which Orientalism operates is to create a sensual visual surface (regardless of subject matter) that we cannot resist. The luscious mode of representation becomes its own erotic experience, full of the anxieties of voyeurism. The Pigment Seller touches at the heart of this second process. We are at the market watching a North African man pound color pigments. Purely colored vulvas are vigorously pounded. The painting is truly disturbing in a way that the better known and sleeker Snake Charmer or Moorish Bath. Unexpectedly, The Pigment Seller makes a prophetic commentary to Clement Greenberg's definition of Modernism (as medium specificity) in the 1950s.
Posted by KOSTIS KOURELIS at 10:38 AM 2 comments: 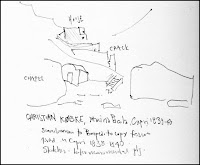 I didn't know of Christen Købke, the Danish Neoclassical painter. His painting at the MFA made me realize the affinities between Capri and Greece in the visual imagination of the Grand Tour. Neoclassicism in Greece is heavily Danish, thanks to the second royal house in 1862 that replaced the first royal house that had been deposed. Accustomed to thinking of the Bavarian cultural connections in the Modern Greece of King Otto (1830s), we forget of the Danish cultural connection of King George I (1860s).

Posted by KOSTIS KOURELIS at 11:40 AM No comments: 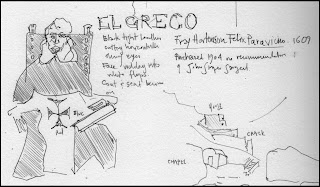 Thanks to John Singer Sargeant, the Boston Museum of Fine Art has an amazing portrait by El Greco. Friar Paravicino is enveloped in the black of his cape and chair. The leather chair with the brass studs and the carved verticals can be seen in real life at the Gardner Museum. Look for the two 18th-century chairs set perpendicularly to the window looking out into the cortile.
Posted by KOSTIS KOURELIS at 10:00 AM No comments:

Thinking of Jon Seydl, curator at Cleveland Museum of Art
Posted by KOSTIS KOURELIS at 7:27 PM No comments: