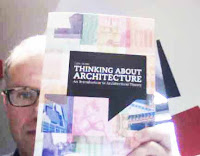 Taking advantage of the student "reading days," the period between the end of classes and the beginning of finals, I have been reviewing some new books that might be used as textbooks for introductory classes. Although, teaching free for a whole semester as I go on sabbatical, I am capitalizing on the teaching buzz of this semester to plan my capstone seminar in Fall 2013. This browsing period has proven to be extremely productive in that I have found two brilliant new books that I would wholeheartedly recommend to any novice or teacher of architectural history.

Colin Davies has written the first textbook that has successfully bridged the gap between the anti-historical theorists and the anti-theoretical historians. Thinking about Architecture: An Introduction to Architectural Theory (London, 2011) is a phenomenal accomplishment. In just 150 pages and organized around eight themes, Davies has interjected history with the passion of its internal hermeneutic tradition but has also tamed the seemingly incomprehensible "architecture speak" (or theory light) still dominant in schools of design. Each chapter is divided into coherent sections with obvious primary sources for the student and a very economical number of monuments that most efficient illustrate the point. I have embraced the book for its clarity and sophistication and its classroom-friendliness.

Another new book that I absolutely adore is a little collection of essays on the architecture of the home. Edwin Heathcote is the architecture critic for the Financial Times and his essays originate from those pages. His little book, The Meaning of Home (London, 2012), takes the reader through a philosophical tour of every nook and corner of a home. Each essay is a few pages long but rich with evocations on historical meanings. It makes an ideal textbook for a class on the philosophy of houses if supplemented by an investigation of the textual comparenda that it brings to the reader (literature, philosophy, film, etc.) But it also makes an inspiring read for anyone interested in the cultural power of houses. This book fits well in Christmas stockings (but beware of ugly cover).

I also reviewed Alexandra Lange's, Writing about Architecture: Mastering the Language of Buildings and Cities (New York, 2012). The book is intended as a handbook on writing contemporary criticism. It takes six classic texts of criticism and analyzes them as strategic documents. The texts are Lewis Mufmord's "House of Glass," Herbert Muschamp's "The Miracle of Bilbao," Michael Sorkin's "Save the Whitney," Charles Moore's "You Have to Pay for the Public Life," Frederick Law Olmsted's "Public Parks and the Enlargement of Towns," and Jane Jacob's "The Death and Life of Great American Cities." The collection is a wonderful idea and I can imagine how it could be used for a writing seminar on criticism. Unfortunately, I couldn't figure out any other objectives and found it difficult to incorporate it in any classes that I teach. Lange gave a seminar at Queens College this last semester on What to Do with an Art History Degree. I would have loved my students to attend since, outside of New York or Los Angeles, few consider a career in architectural criticism.
Posted by KOSTIS KOURELIS at 11:00 AM 1 comment:

Greece: The Art of Archaeology (ART 374) 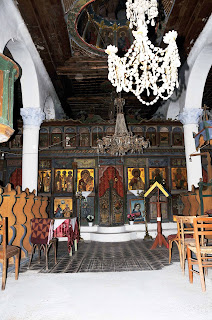 Franklin and Marshall College will be offering a summer program in Greece combining studio arts and archaeology.

An introduction to the visual culture of Greece and an exploration of artistic methods in archaeological recording. We will survey and photograph architectural remains from Greece’s rich cultural history and will introduce students to contemporary problems of heritage management and environmental deterioration in a global context.

The intensive two-week summer program in Greece is a hands-on introduction to the art and architecture of Greece from antiquity to the present. It immerses students into a physical engagement with monuments that have never been studied before. The students will apply old and new methodologies to document cultural artifacts from buildings to landscapes. In contrast to a traditional model of passive site-seeing, the class will immerse the students into a diverse microcosm from the most rural to the most urban. Three distinct case studies will introduce the technical challenges of studying the past, as well as, the contemporary realities that intersect with the management of cultural heritage from environmental degradation to the globalization of labor. We will document ancient walls, medieval castles and nineteenth-century houses in the sites of Lidoriki, Athens and Corinth. Co-taught by a photographer and an architectural historian, the class will reveal the intimate partnership between studio arts and the construction of history.

1. Lidoriki is a pastoral village nestled in the remote mountains of central Greece. Occupied since antiquity, Lidoriki contains a microcosm of Greek history. We will survey the acropolis of ancient Kallipolis, which was converted into a castle during the Middle Ages and we will document the beautifully preserved church of Taxiarches. Through drawing and photography, we will produce a complete visual record of decorative arts and traditional stone architecture. During the 1960s, the three rivers that met in Lidoriki were dammed to create a reservoir to water Athens. Beginning in the 1990s, the mountains of Lidoriki were also aggressively mined for the extraction of bauxite, an ingredient in the production of aluminum. Mining and damming have produced an extreme lunar landscape that places modernity into direct confrontation with Lidoriki’s pastoral traditions. The juxtaposition of antiquity and modernity makes Lidoriki a fascinating region. We will stay in the village and collaborate with the local community, as well as, with a consortium of scholars from the Polytechnic University of Athens and Maryville University. The experience will give the students powerful lessons in the complexities of cultural resource management in the intersection of local, national and global forces.

2. Corinth. Excavated by American archaeologists since 1893, Corinth is microcosm of archaeological periods and methods. Its rich archive of old photos and drawings offers a rare glimpse in the intersection of fine art and excavation. Here we will reverse the process of investigation that we learned in Lidoriki. Rather than applying drawing and photography on standing monuments, we will use drawings and photographs from the 19th and early 20th centuries to reconstruct an excavated monument that does not exist anymore. Using historical photographs and the excavation records, we will create a 3-dimensional model of Saint John, an important church that was removed in 1937.

3. Athens. We will conclude our trip in Athens, Greece’s largest and most historical city. We will visit the major museums to investigate ways by which the past has been represented at a metropolitan setting. Turning our attention on the urban fabric, we will execute a number of visual works that capture the overlapping layers of history, including the most recent chapter of the financial crisis. Joining our team from the Polytechnic University, we will hold a final review session in the university’s historical building. 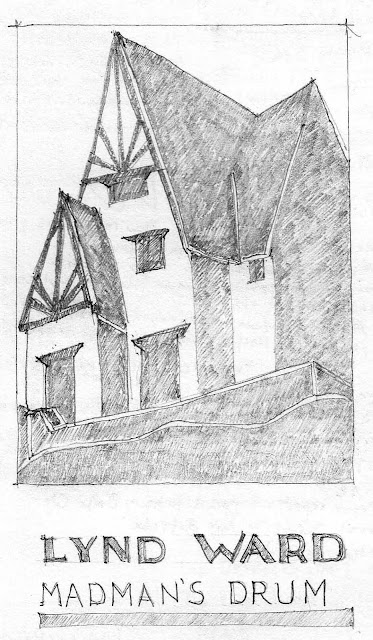 Posted by KOSTIS KOURELIS at 9:46 PM No comments: 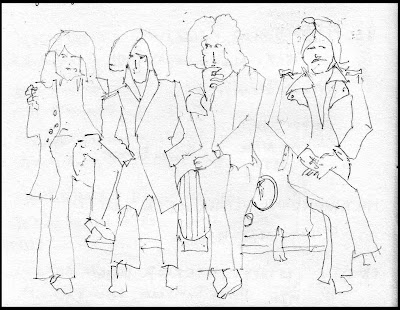 A couple of years ago, we began the Punk Archaeology project which will culminate in a day-long conference, performance and all-around happening in Fargo this February (see here). The revival of this collaborative (it would be punk sacrilege to call it "community") helps me return to one of the issues raised in the project, namely the relationship between punk and house form. I had pondered on this before, see The House of the Rising Sun, The Clash squatting, Iggy Pop's trailer home in Ypsilanti,. As Barack Obama honors Led Zeppelin in the 2012 Kennedy Center awards today, I am thinking about the contrast between two domestic utopias, between punk's post-industrial arcadia of urban ruins and rock's pre-industrial utopia of the idyllic countryside. During the 1970s, two antithetical bands, The Clash and Led Zeppelin congregated in radically different dwellings. Both were extreme expressions of belonging and both were off the grid -- neither had electricity nor water. Joe Strummer began his musical career in 1974 by forming The 101ers, who took their name from 101 Walterton Road, London, where the band squatted. The row house was part of a bombed out World War II neighborhood that the government eventually demolished in 1975. The band then squatted at 36 N Luke Rd in a West Indian neighborhood, which explains punk's Ska connections. Through The Clash and other bands like them, punk was conceived inside the domestic ruins of 19th-century cities.

At the same time, Led Zeppelin retreated to the British countryside, inhabiting an 18th-century cottage in Wales. Bron-Yr-Aur, made famous by an instrumental track by the same name, belonged to Robert Plant's family, who took used it as a vacation house in the 1950s. Although rooted in the American blues, Led Zeppelin taps into a medieval sense of organicity that is deeply seated in the foundations of the British psyche. This is clearly evident in the band's fin-de-siecle logotype. While Plant and Jimmy Page were writing Zeppelin III at Bron-Yr-Aur, Raymond Williams was historicizing the British myth of the country in a landmark of Marxist historiography, The Country and The City (1973). Williams argued that the British began idealizing the countryside at the very moment that they were destroying it (the enclosure movement, aristocrats turning to capitalist landlords, etc.) Unbeknownst to Williams, Plant and Page were in the process of transforming the myth of rural England into a powerful acoustic aura to be replicated in ordinary homes through high-fidelity record players. The Bron-Yr-Aur house (photo below) represents the specific architectural origins of this transformation. Zeppelin's genius (which is why they are honored by the White House) is to invisibly translate these very stone walls into an aural structure that bears no resemblance to its vernacular origin. 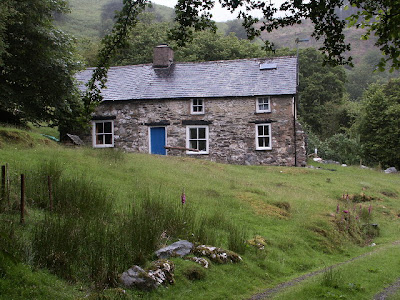 PS. I did the sketch of Zeppelin above Sunday morning, sitting in the kitchen of my sister and brother-in-law (who is spending his sabbatical in Washington, D.C.), waiting for other to wake up, reading The Washington Post. When my niece came down, she was extremely curious why I was drawing people from the newspaper. Then she disappeared to return with a concocted notebook that resembled mine, but made up of cardboard, tape and paper. For the rest of the morning, we learned how to copy cartoons and photos. She's a natural.
Posted by KOSTIS KOURELIS at 7:11 AM No comments: