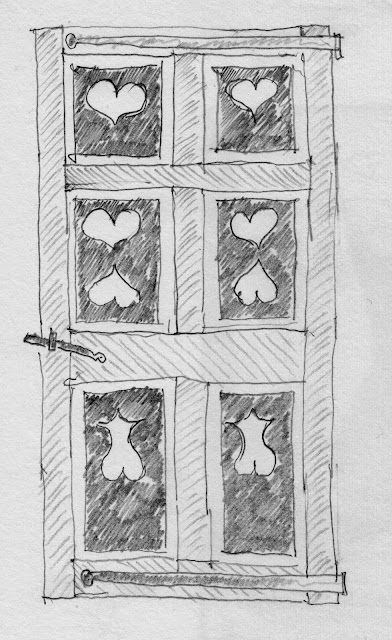 Summer is here, tenure has been granted, I rush to finish a sleuth of over-due articles, while also getting ready for another season of The Deserted Greek Village Project. After a hiatus, I feel compelled to return to blogging.

What has also become clear to me is that Franklin and Marshall College had been a pioneer in the study of Pennsylvania fork arts, a specialty that we have mostly left to the wayside. Before moving on to the University of Pennsylvania and establishing the discipline of Folklore and Folklife, Yoder was teaching at FandM. Generally speaking, the study of American folk arts seems to have become co-opted by heritage. Pennsylvania German art has been co-opted by the heritage industry most aggressively. Walking through the fraktur exhibition, it becomes clear an elderly white Christian group is the target audience. In engaging younger contemporary artists, the Free Library has tried to break that mold. In similar ways, Greek folk arts have lost the critical edge that they had in the 1960s.

The most important story to be (re)told about the arts of the Pennsylvania Germans is that it's radically different from the art of the English Protestants. What the Germans brought to Pennsylvania is the rich visual culture of the Baroque. Their Quaker hosts (William Penn, etc.) had a fundamental mistrust of art and architecture. Even if some of the German groups were radically anti-art, a great majority of them brought continental visual traditions to the U.S. German Baroque is absolutely wild and has nothing to do with the reserved nature of its British equivalent.

I strongly recommend Don Yoder's 2001 “The European Background of Pennsylvania’s Fraktur Art,” and “The Fraktur Texts and Pennsylvania-German Spirituality,” in Bucks County Fraktur (Pennsylvania German Society 23) [I can send you PDFs]

The door above is in the permanent collection of the PMA. I sketched it because I wanted to figure out the parts and sequence of its construction. Note that the two vertical boards are primary with the three horizontal boards as secondary and the painted panels are tertiary. The panels are painted and decorated by curved shaped that stand out in such a way as to negate the architectonic logic of the door. The painted panels, in other words, float into space. They are served by the door as frames. Within each panel, we have the figure of the heart. Iconographic scholars have beaten the symbolism of the hear to death, as a reference to Christianity. What I see instead, is a smart game of transformations. What might look like a heart at the first upper panels is flipped in the second upper panel to create a dual composition. The heart stops being a "heart" and it becomes a formal game that can lead to imaginative connotations. The upside-down heart, for instance, begins to look like a fruit. It touches its parent shape at the tip adding a sense of visual tension and fragility. At the lower panel, the shapes melt into a third shape. I don't know about you, but to me the final derivations is suggestive of the human body. I see a torso and a posterior with the breast or shoulder shapes above. Anatomically suggestive of the human body, I interpret this as a sexual transformation.

The architectural challenge of any door is to counteract the weight of its material, greater at the bottom than the top. The two iron hinges act quite differently, the top hinge is in tension, the bottom hinge is in compression.  The shapes at the lowest panel, it seems to me, hint on the horizontal striation of any door. The concave and convex shapes address gravity towards the earth and the aspiration of ascent above.

One group of people that loved Pennsylvania folk arts were the Modernists. The 1770 door makes it clear why someone like Charles Sheeler used Ephrata Cloisters as a source of inspiration in the 1930s. Looking at folk art with fresh eyes, even through the spectacles of modernist formalism, makes them provocative once again.
Posted by KOSTIS KOURELIS at 10:23 AM No comments: