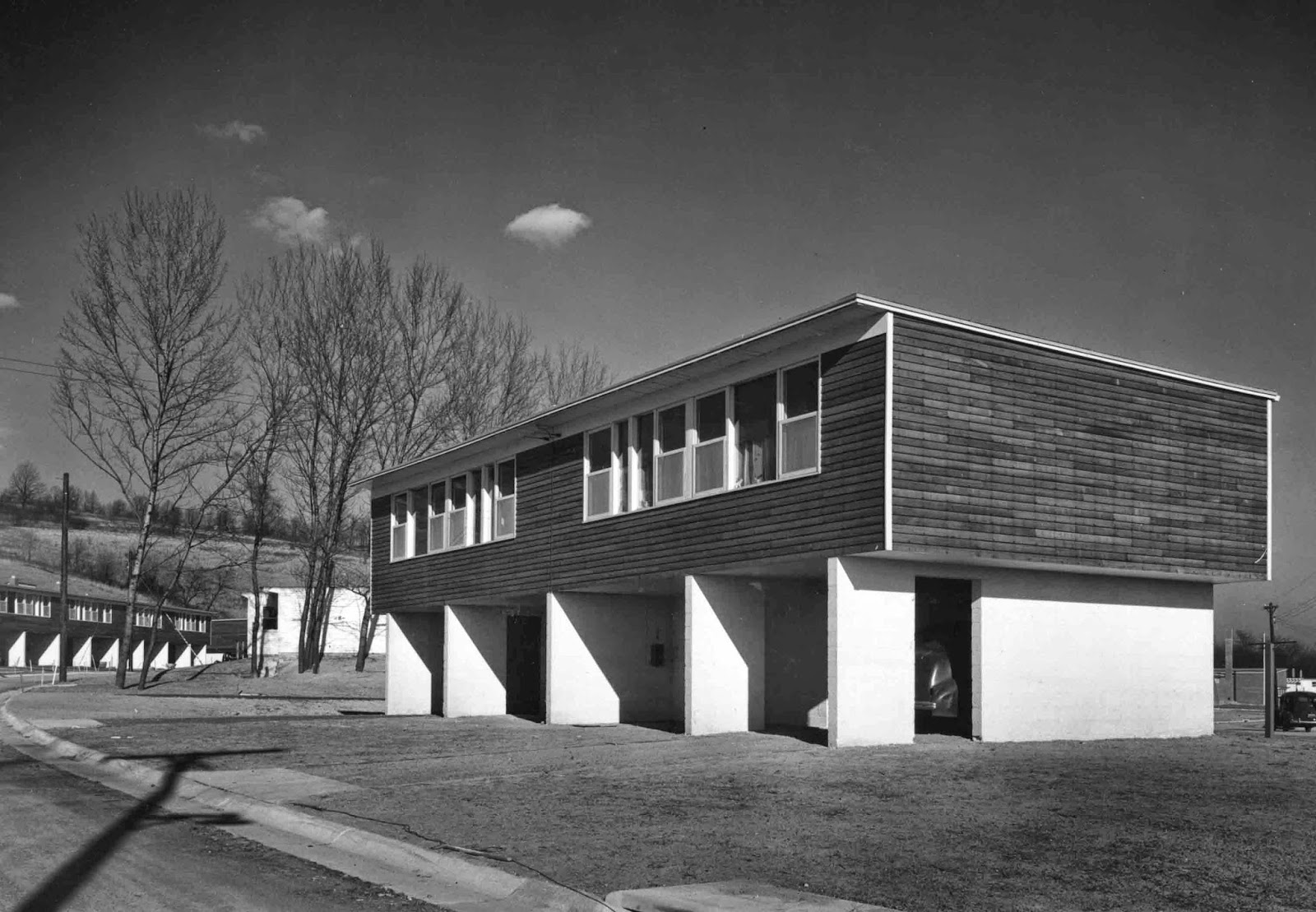 When the telephone rang in my office at Franklin & Marshall College, I was surprised to learn that the caller on the other line was a resident of a Louis Kahn house and, most strikingly, a Louis Kahn house that has been largely forgotten. In 1942, Kahn, Oscar Storonov, and George Howe reconfigured the traditional row house to serve a community of African-American steel workers returning from World War II. Known to just a handful of architectural historians, Carver Court in Coatesville, Pennsylvania, had receded from public attention. And for that very reason, the Preservation Alliance of Greater Philadelphia had placed it on its 2012 Endangered Properties List. Thanks to the stewardship of Ben Leech and the research of Allee Berger, the Pennsylvania Historical and Museum Commission determined Carver Court eligible for listing in the National Register of HIstoric Places in March 2013.

As the local architectural historian, I was invited to meet with civic and community leaders of Caln Township to brainstorm on the future of this housing complex and to strategize on celebrating its unique role in the history of African-American labor. Although I am not a Kahn expert, I had worked in Louis Kahn's archives as a student, and wanted to seize the moment that William Whitaker and Ben Marcus have set into motion with their spectacular new book, The Houses of Louis Kahn, and accompanying exhibition at the University of Pennsylvania Architectural Archives. 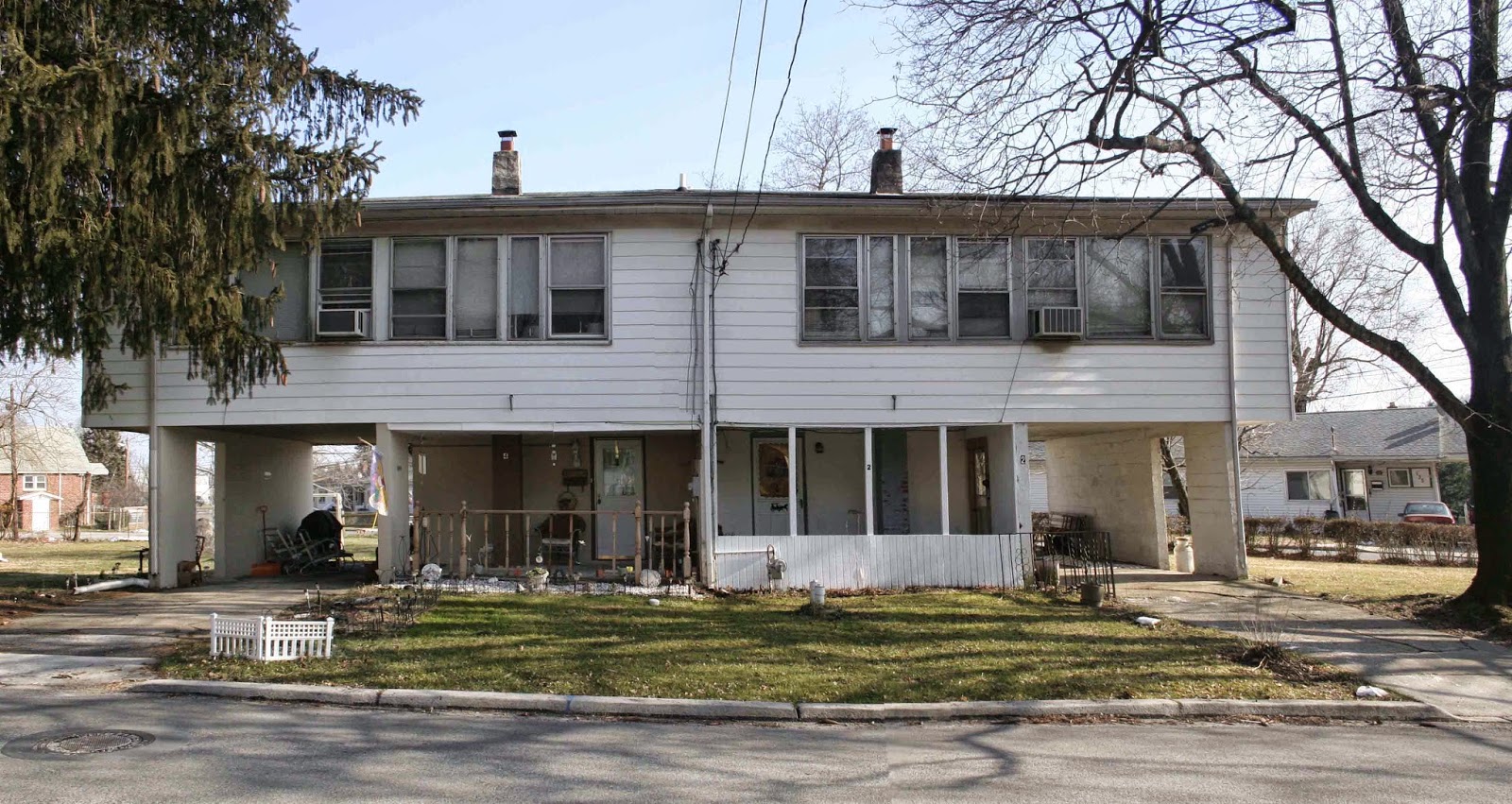 Carver Court is no ordinary house by virtue of its users, some of which are the original African-American steelworkers. Most of the better-known Kahn houses were commissioned by Philadelphia’s professional class and are located in the suburbs, while Carver Court engages Kahn’s early commitment to social and economic justice. If it were up to Kahn, Carver Court would not have been segregated. Race politics at this Pennsylvania mill town necessitated the residential division between black and white workers, even though both groups worked for the same Lukens Steel factory. The lynching of Zachariah Walker in 1911 underscored such ethnic tensions. Caln Township was initially settled by William Penn in 1714. Ironically, the white and black housing projects were separated by the Gardner-Beale farm, which had strong Quaker roots and served in the Underground Railroad. A farmhouse from 1811 survives and is now surrounded by Coatesville High School completed in 1968.
Louis Kahn was a housing activist as early as 1931, when he founded the Architecture Research Group. His partner, Oscar Storonov (and Alfred Kastner), had designed the first Modernist housing project in America, the Carl Mackley Houses for the hosiery workers union (1932). Kahn’s activism helped fight Philadelphia’s resistance to public housing and led into the foundation of the Philadelphia Housing Authority. Carver Court is the greatest physical manifestation of Kahn’s labor union vernacular.
Coatesville is located half way between Philadelphia and Lancaster at the intersection of the Pennsylvania Railroad Main Line and the Brandywine River. Coatesville’s steel mills, that produced the beams for the World Trade Center, are of great historical significance and, like Kahn’s housing, continue to operate (under new global management). Carver Court’s remoteness from Philadelphia and the general economic decline of manufacturing have contributed in a slow forgetting of both Pennsylvania’s labor movement and Philadelphia’s architectural engagement. Six decades after its original completion, Carver Court asks some important questions. It is only one of five housing projects designed by Kahn, Storonov, and Howe, and it the single specimen of their African-American architecture. Carver Court has slipped the radar of preservationists and historians because it looks nondescript and lacks the telltale signs of high modernist distinction. Its ordinariness, however, is what makes it exemplary. Taking cues from Le Corbusier’s elevated piloti, Kahn invented a scheme of adoptive design that reinterpreted the traditional row house. His “ground-freed” housing form elevated living quarters to the second floor and left the first floor open to the owner’s specific interpretation. Rather than limiting what the owners did with their allotted housing unit, Kahn wanted the occupants to exercise some freedom in how to use the first floor. It could function as a garage, a workshop, or added living space. The architect’s agency could be supplemented by the occupant’s agency, giving the community a sense of ownership and design engagement. Thus, the very indeterminacy of Carver Court that makes it a specimen of democratic design has also caused its progressive neglect by scholarship.
The phone call from Carver Court and the meeting with Caln Township precipitated a series of questions on both the original significance of the monument as well as the pedagogical opportunities in its rediscovery. A call from a grassroots community generates a research opportunity beyond the obvious scholarly needs. Involving undergraduate students in the documentation of Carver Court’s story seems one of those rare opportunities to engage students with artifacts. First, it is astounding how much work remains to be done even on America’s most important modernist architect. Understanding the afterlife of Carver Court is one immediate challenge, but one of great potential in teaching what Delores Hayden called “the power of place.”
Posted by KOSTIS KOURELIS at 2:07 PM 1 comment: