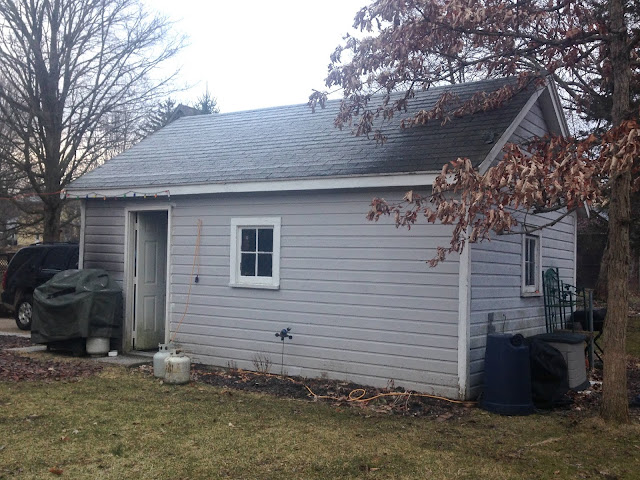 Greek immigrants of the early-20th century held religious services in a diversity of spaces including stores, houses and garages. Last week, I had a chance to explore one such space, a garage in Ann Arbor, Michigan where Greeks held their first church services in 1927. The garage was also busted for illegal alcohol in 1930, and its owner (the priest's son) was arrested. The congruence of holy and unholy spirits makes this otherwise ordinary building a special specimen of diaspora architecture. Amazingly, the structure still survives and is owned by a lovely family who has taken excellent care of the property.

On March 21, 2019, I was honored to give the 17th Annual Dimitri and Imgard Pallas Lecture in Modern Greek Studies at the University of Michigan. My talk was called "Excavating Home: Archaeologies of the Greek American Experience," so I couldn't have left Ann Arbor before some exploration. The day after my talk and a few hours before my departing flight, I took a walk down S. Main Street in search of the legendary moonshine church garage. 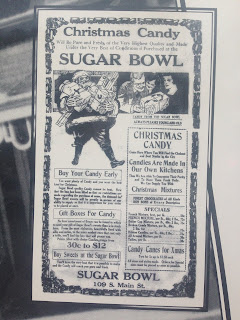 Ann Arbor is the home of an important Greek immigrant community. Along with Italians, Russians and Poles, Greeks made up 13% of the population in the 1920s. The city commemorates its Greek architectural heritage with plaques that on early Greek restaurants around Court House Square. A plaque at 126 S Main (left), for example, celebrates the Sugar Bowl confectionary and restaurant that survives only in photographs. The first Greeks of Ann Arbor were served by clergy traveling from Detroit until 1927, when a priest arrived from the old country. Father Nicholas Agathangelos was a 1922 Asia Minor refugee from the village of Adaval (now Aktas). After a short stay in Greece, where he received some ecclesiastical education, he joined his sons in Ann Arbor. In 1927, the first Orthodox mass was celebrated in a garage owned by his son. By 1935, the Greeks of Ann Arbor had raised enough funs to build the church of Saint Nicholas at 414 N Main Street. In 1998, the church moved to 3109 Scio Church Road and the old Saint Nicholas was torn down (illustrated below from 1945 church bulletin). The new Saint Nicholas continues to function today as the epicenter of the Greek community (see history here). 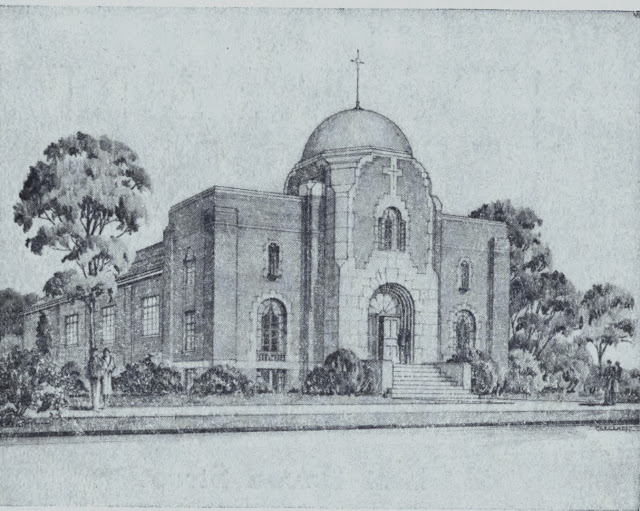 The details of the 1927 garage church seem to have disappeared until Will Stroebel made a passing reference in his essay "The Hyphenated Hyphen: Turkish-in-the-Greek-Script American Literature," Ergon: Greek American Arts and Letters (Dec. 18, 2018). Will is a star of Greek American Studies. He received his PhD from Michigan in Comparative Literature in 2017. His thesis, "Fluid Books, Fluid Borders: Modern Greek and Turkish Book Networks in a Shifting Sea," has won two awards, the 2019 best dissertation prize from the American Comparative Literature Association and the 2019 ProQuest Distinguished Dissertation Award. Will's work is about the transnational and linguistic complexities between Greece and Turkey. In the Ergon essay, Stroebel explores Agathangelos's story as a Turkish-speaking Greek serving the religious needs of a diaspora population whose language he did not speak. In addition to being Ann Arbor's first clergyman, Agathangelos left behind an amazing corpus of literary and artistic works that Will has brought to light.

Will (happened to have lived in that neighborhood in his early grad school years) gave me the precise address of Ann Arbor's garage church and some encouragement to poke around. He also sent me the reference to the police report on the garage's alcohol violation by Agathangelos's son, Constantine Pappas (short for Papadopoulos):

"Arrests on liquor and traffic charges continued to be reported at police headquarters during Sunday and Monday following the unusual number of such cases on the county court docket Friday and Saturday. Dave Ragen, 221 West Washington street, and Constantine Pappas, 312 Pauline Boulevard, are being held on charges of violation of the prohibition laws. Police raided Pappas' home and discovered two bottles of liquor, they reported. A subsequent raid on his store at 119 East Ann street resulted in the confiscation of several gallons of liquor, 50 gallons of mash, and a still, police said. Ragen had, a pint of liquor on his person at the time of his arrest, according to the officers." The Michigan Daily 41:26 (Oct. 28, 1930), p. 3.

With the details of the report, I was able to locate the site. The garage measures about 15 x 20 ft. It sits in the back of a shotgun house constructed in 1895. Both house and garage have gone through renovations, but the bones of both buildings remain intact. The current owners were incredibly hospitable in giving me a tour of the house and garage (which currently serves as home for their nice cat). The original house (ca. 18 x 40 ft) was a two story home with two adjacent rooms per floor. Access to the second floor would have been from a staircase in the back, which was removed in the 1940s when a new kitchen was added. We can date the kitchen from the intact cabinetry manufactured by the Modern Steel Equipment Co. in Geneva, Ill. (see 1938 catalog here). The house was enlarged in 1990s, but retained the original rooms, including the beautiful molding and hardware.

The garage is made out of wood on a concrete foundation with all its wooden structure intact. The siding is contemporary and matches the house renovation, but the interior space is exactly as would have been experienced by Agathangelos and his congregation in 1927. In many ways, the Ann Arbor church garage is comparable to a rural Greek chapel. It is basilical in plan and the small window in the middle of its north facade (above) would have framed the moveable altar. With so much of the interior spaces intact, I hope to draw an interior reconstruction at a future post. 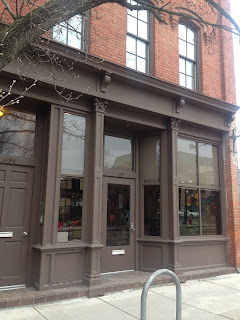 We can gather from the The Michigan Daily crime report that Constantine Pappas distilled the alcohol in his store at 119 E Ann Street (where a still was found). The store was part of the Hoban Block built in 1871 and survives today and houses a furniture store.

This little exploration of the architectural realities of early
Greek Ann Arbor provide important clues on the early phases of immigration before the establishment of permanent social centers. The double arrest between the downtown shop and the extra-urban garage show the urban dynamics of the early American city. Walking south on Main Street to the Pappas garage, one feels the industrial heritage of Ann Arbor. After the vibrant commercial downtown, one passes the perennial warehouse-condominiums of the 2010s, factories converted into the Yard luxury student apartments or the 618 S Main.

This south end of town still retains the evidence of thriving mill industry that made Ann Arbor thrive in the early 20th century. The surrounding housing, worker cottages, would have served the mill industry. An old rail line cuts S Main St diagonally and gives clues of the city's connectivity to Detroit and Toledo. Unfortunately, the 1924 Sanborn Fire Insurance map does not cover the block under consideration (below). If it did, we would have had an almost contemporary plan of our garage-church. 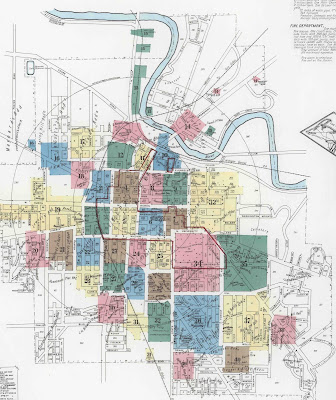