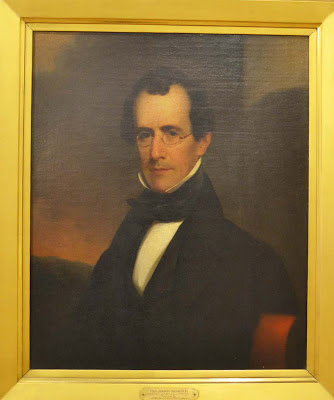 Franklin and Marshall College has just installed two of its greatest possessions at the Phillips Museum. Go see them. My labels below:

John Williamson Nevin (1803-1886) was a pioneering American theologian incorporating Hegelian philosophy into the armature of Protestantism. Centered at the foothills of the Blue Mountains, Nevin’s radical theology took its name from Mercersburg, where Marshall College was located before moving to Lancaster. Nevin’s Mercersburg Theology placed new attention on the sacramental and Christological foundation of the church and sought to incorporate a dialectical understanding of church history from its foundation to the present. At a time when American Protestantism was dominated by Scottish “common sense” disseminating from Princeton, or the Second Great Awakening’s “new measures,” popularized by Methodist camp meetings, Nevin offered a historicist alternative grounded in German idealist philosophy. Nevin was radical enough to be threatened with excommunication, while Ursinus College was founded as the conservative alternative to what seemed as a “radical” Marshall College. Nevin served as Franklin & Marshall College’s second president (1866-1876) and conceived of the amalgamated school as an extraordinary experiment in American education destined to integrate its extremes, the German character (endowed with philosophical idealism) and the English character (endowed with applied practicality). Such a dialectical synthesis, Nevin argued at the college’s inauguration on June 7, 1853, would awake Pennsylvania, “the Sleeping Giant.” Nevin, Philip Schaff and Friederich Augustus Rauch succeeded in creating a unique intellectual paradigm and positioned Franklin & Marshall College at the forefront of American Romanticism. Although it has ceased to command the attention of the College, Nevin’s Mercersburg Theology is still evident in Franklin & Marshall’s ideals of a liberal education.

Nevin was born in a rural Shippensburg, Pa. He attended Union College in Schenectady, N.Y., and Princeton Theological Seminary, where he received the finest Presbyterian education. In 1830, he moved to Pittsburgh as professor at Western Theological Seminary and, in 1849, he moved to Mercersburg, where he was appointed professor of theology and biblical literature at the Theological Seminary of the German Reformed Church (1840) and president of Marshall College (1841). Jacob Eichholtz was commissioned to paint Nevin’s portrait officiating as president and chairman of the board of trustees at Mercersburg; at the same time, he retouched the portrait of Mrs. Nevin (below). The paintings accompanied the Nevins from Mercersburg to Lancaster in 1855. In addition to his presidency, Nevin was an admired professor of philosophy, history and aesthetics at Franklin & Marshall. He was so loved by faculty and students, that the College became unofficially known as “Nevonia.” After his death, a stained glass window was commissioned for the chapel of Old Main, where it still stands today. Nevin’s legacy is cherished at the Lancaster Theological Seminary, which moved across College Avenue in 1893.

Lancaster’s painter Jacob Eichholtz became one of Pennsylvania’s leading artists, building his reputation on portraiture. Before the proliferation of photography, official portraits sought to capture the essence of the subject’s physical, intellectual and spiritual beauty, but they also disseminated a visual standard of the figure’s prominence in society. Thus, Eichholtz’s portrait captures Nevin’s intellectual depth in the spirit of European Romanticism, as well as his leadership at the helm of Marshall College.

Eichholtz produced four identical copies. We are not certain of where they initially hung or of their intended dissemination. The Phillips Museum owns two of the portraits (gifted in 1963 and in 2012); a third version belongs to the Western Theological Seminary; and the fourth version is lost. 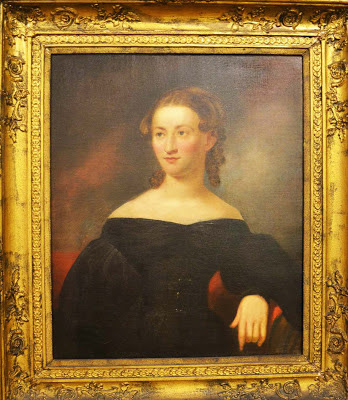 John Williamson Nevin (above) met Martha Jenkins (1805-1890), while professor at Western Theological Seminary at Pittsburgh. Their marriage, on New Year’s Day of 1835, began a life-long partnership and presented an ideal model of family life to the students of Franklin & Marshall College. Martha Jenkins belonged to one of Pennsylvania’s oldest families, bestowing on Nevin social prestige and financial stability. The Jenkins family had emigrated from Wales in the 17th century and received a grant from William Penn to develop a large track of land along the Conestoga Creek in Chester County. Jenkintown in Philadelphia is named after the family. After the American Revolution, Martha’s grandfather purchased the Windsor Iron Works, an old English company, and developed a profitable industry. Martha’s father, Robert Jenkins, was a member the U.S. House of Representatives and the Pennsylvania State of Representatives; Martha’s mother, Catharine Carmichael, was the daughter of a prominent Presbyterian pastor at Brandywine Manor. Like Nevin’s youth, Martha’s upbringing was steeped into the elite institutions of the Presbyterian Church.

Martha grew up in Windsor Place, her family’s prominent estate in Churchtown, where the young couple lived for five years after their marriage. The home survives as a historical home. The Nevins moved to Mercersburg in 1840 and to Lancaster in 1855. Martha gave birth of seven children, William Wilberforce, Robert Jenkins, Alice, Blanche, Martha Finley, Cecil and John (who died young), and Herbert (who died as an infant). Although Martha devoted her life to the family, she was well versed in literature and occasionally contributed articles to the newspaper. “A lady with practical ideas,” Martha assisted Nevin in designing their new home, Caernarvon Place, a farm in Lancaster County. She outlived her husband by four years and died in 1890. The bronze pulpit at Old Main was dedicated to her memory and matches the memorial window.

Martha Jenkins’ portrait bears the hands of two painters. Esteemed Philadelphia artist Bass Otis first painted Martha soon before her marriage in 1835. Six years later, however, Lancaster painter Jacob Eichholtz was asked to repaint parts of Martha’s portrait. Eichholtz had painted Martha’s parents in 1836, and in 1841 he was called anew to paint her husbands official portrait. While working on Nevin’s four official portraits, Eichholtz touched up Otis’ original. A short-sleeved dress in the earlier painting, for instance, was changed to a long-sleeved dress, reflecting more appropriate attire for a pastor’s wife. Scientific analysis might shed further light in differentiating the hands of the two painters who were friends and collaborators at the Pennsylvania Academy of Fine Arts. In its double chronology, the portrait of Martha Jenkins Nevin reveals a process of painterly transformation, a veritable artistic wedlock between an old and a new image. A similar artistic marriage takes place between another couple, Thomas Emlen and Serena Mayer Franklin, whose double portrait Eichholtz painted in 1838 (also exhibited in the Nissley Gallery). Closer analysis on such double paintings will shed invaluable light into the contribution that women made in the lives of Lancaster’s most prestigious men and the intellectual life of Franklin & Marshall College.

The painting of Martha Jenkins Nevin was gifted to Franklin & Marshall College in 1967.

Posted by KOSTIS KOURELIS at 10:05 AM No comments: