The Peschke opening at Bryn Mawr was pretty amazing. I will look back at this evening as a landmark in my academic life. Thanks to all the wonderful lenders and museum staff that helped me put Peschke on the art-historical map. 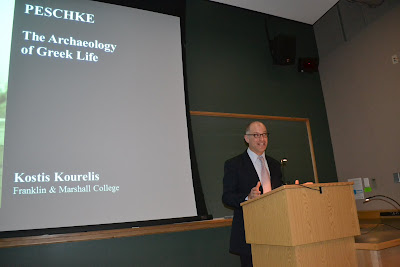 The festivities began with my lecture, "Georg von Peschke: The Archaeology of Greek Life." 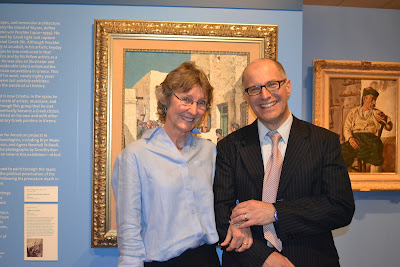 With Tracey Cullen, editor of Hesperia. In 2007, Tracey insisted that I track down the Peschke estate in order get copyright permission to use a Peschke reproduction. This lead to my discovery of the Peschke family in California and the beginning of a wonderful relationship. 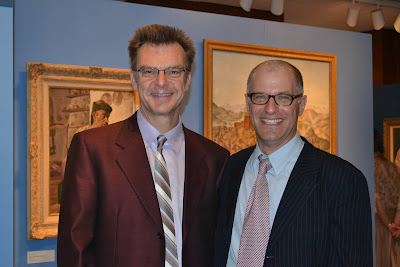 With Brian Wallace, the new Curator and Academic Liaison for Art and Artifact Collections at Bryn Mawr College. Brian began his new job in January and inherited the project in process. He shepherded its completion victoriously. I'm proud that this was his first show at Bryn Mawr. 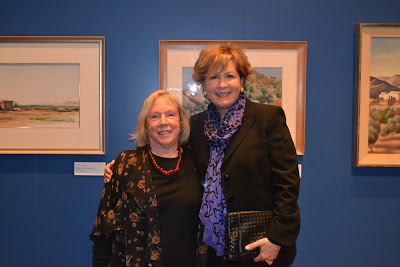 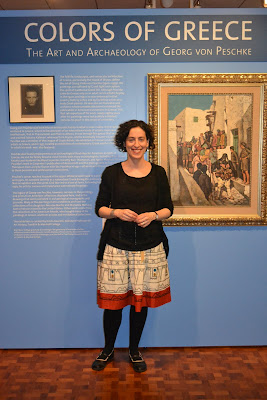 Of course, none of this would have been possible without the support of this lady, Celina Gray 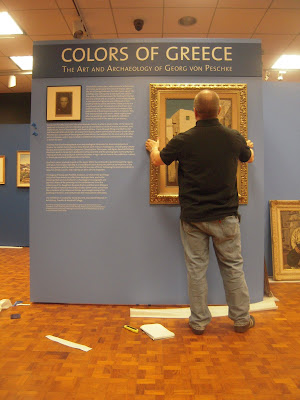 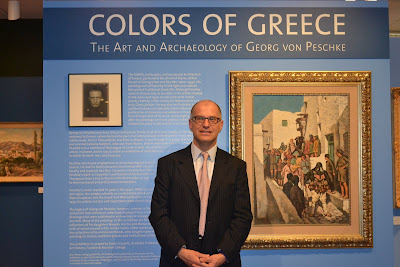 COLORS OF GREECE:
THE ART & ARCHAEOLOGY OF GEORG VON PESCHKE

Dr. Kourelis, the curator of the exhibition on Peschke, will speak about Peschke's work both as a painter and as an archaeological illustrator in Greece in the 1930s. A reception will follow the lecture.

In conjunction with the exhibition Colors of Greece, Dr. Leontis, a scholar of modern Greece and Greek diaspora culture, will give a lecture on the subject of her current book, Eva Palmer Sikelianos (1874-1952), BMC class of 1900, and on Palmer's groundbreaking work as a creator of Greek dress for theatrical performances, including the famous reenactments of Delphic Festivals in 1927 and 1930. A reception will follow the lecture.
Posted by KOSTIS KOURELIS at 2:48 PM No comments:

The Dog at the Mill: Courtenay 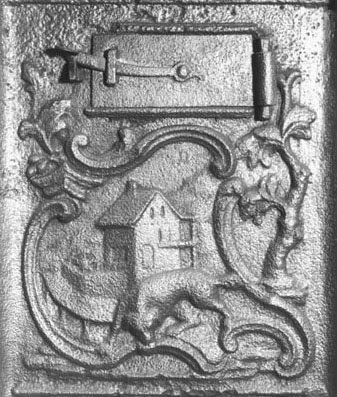 My colleague Dorothy Merritts sent me a fascinating response to last posting The Dog at the Mill. I quote here: "I checked your blog and am intrigued. In fact, I did a search on dog and mill, carving, and the name of the artist (Courtenay) who carved the mantel at the Powell house, and you will be amazed at what I found: http://www.chipstone.org/publications/1996AF/Randall/1996RandallIndex.html. This particular website indicates that there are links among Franklin's Poor Richard's Almanac, Aesop's fable "The Dog and the Meat", mills, millers, iron forges, Stiegel, and more. The iron forges, incidentally, also built dams to use water power to run bellows, turn various things, etc. All iron forges have dams and led to the industrialization of waterways, even though the use of water power had a different outcome than, say, a flour or fulling mill. Regardless though, a stream was dammed and a pond formed that could trap sediment, burying original wetlands, and later leading to deeply incised powerful streams where meadows once were the habitat of bog turtles and sedges." Thank you Dorothy

The image above is clearly the same as the one at the Powel House. It's provenance is amazingly enough from Lancaster County. "Front plate of a ten-plate stove, marked “h. w. stiegel/ 1769/elizabeth furnace,” Lancaster County, Pennsylvania, ca. 1769. (Courtesy, Hershey Museum, Hershey, Pennsylvania.) Courtenay undoubtedly carved the pattern in Philadelphia."

Posted by KOSTIS KOURELIS at 5:57 PM No comments:

The Dog at the Mill: Powel House and the Environment 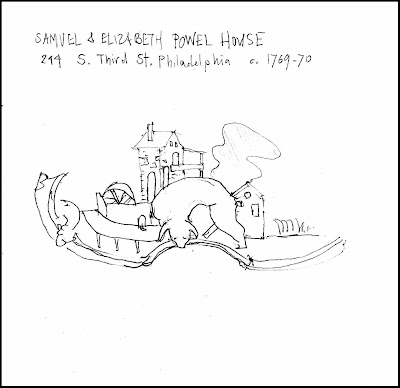 Dorothy Merritts and Robert Walter, my colleagues at the Department of Earth and Environment, have been doing some amazing research on the aggressive manipulation of the natural environment in 18th and 19th century Pennsylvania. They have been studying the proliferation of mills through the country-side and the radical alteration of streams.

The Powel House is one of the most historical interiors of Philadelphia. It is important both for its historical value but also for its contribution to the development of the preservation movement in the 1920s. One room, for example, formed the core of the Metropolitan Museum's American Wing when it opened in 1924.

The parlor from the second floor of the Powel House was installed in the Philadelphia Museum of Art (Room 287) by Fiske Kimbal, a preservation pioneer. Fittingly, the room is right next door to the installation of a Pennsylvania German kitchen that belonged to a prosperous miller from Milbach, in Lebanon County (Room 285). Looking at the Powel House's Baroque decoration, I noticed a wonderful detail at the center of the parlor's mantelpiece. It shows a pastoral scene with a dog drinking from a stream beyond a water mill. With Merritts/Walter's geological research in mind, I realized that this was more than an idyllic scene, but rather a testament of bold environmental interventions. This is an image of aggressive exploitation.

Dorothy Merritts was the recipient of the 2010 annual Dewey award for Outstanding Scholarship. She was honored at Common Hour, where she presented her work on the geology of 18th-century mills (see lecture here). Merritts has also produced a great array of undergraduate papers, a regular presence in F&M's student research fairs.
Posted by KOSTIS KOURELIS at 3:25 PM No comments: 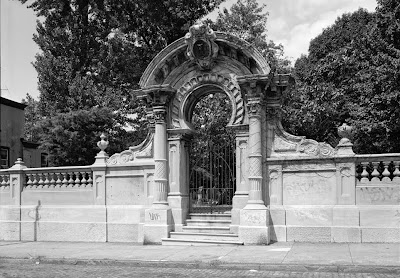 Restoring old plaster involves those magic plaster washers that only Kilian's at Chestnut Hill carries. Loaded with plaster washers and heavy bags of plaster dust, I decided to take the long way home, and drive the entire length of Germantown Avenue, one of my favorite American streets (where you can see the discordant clash between the 18th and 21st centuries).

At 4909 Germantown Ave. I came across a monument that I had never seen before, the gate for the Hood Cemetery. It was designed by William L. Johnston in 1849-50. Although Baroque in every other respect, it features a horse-shoe arch of clear Islamic origins. Thus, I have found another specimen for my collection of Islamic Philadelphia (see here). And as far as I can tell, this is the earliest example of this genre and predates the other examples by two decades. This early instance suggests that an Orientalist iconography first entered Philadelphia via funerary architecture. Browsing through the Fine Arts Library at Penn, I also discovered a 1968 dissertation that deals with Islamic influences in American architecture: Gerald S. Bernstein, “In Pursuit of the Exotic: Islamic Forms in Nineteenth-Century American Architecture,” University of Pennsylvania, Ph.D. dissertation (Philadelphia, 1968)

Here is my ongoing list of Islamic Philadelphia monuments:

The image above is from the official HABS survey of the monument. The photo was taken by Jack Boucher, ca. 1973.
Posted by KOSTIS KOURELIS at 10:16 AM No comments:

Gérôme: Portal of the Green Mosque 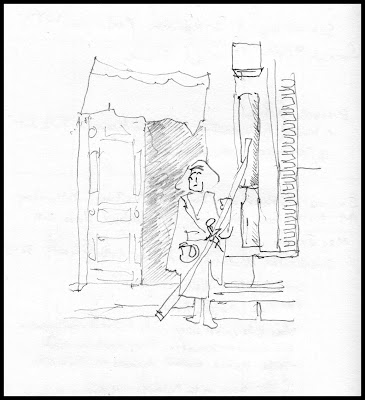 Jean-Léon Gérôme
Portal of the Green Mosque
(Sentinel at the Sultan's Tomb)
c. 1870

Crossing of unusually long firearm with sword representing the two domains of the Ottoman empire (tradition and modernity). Placement of sentinel along right opening creates a suggestion of human support for the architectural extravagance. But the attached column is broken at the right jamb, missing its capital, which we see on the other jamb, where column shaft is gone but capital still survives. The molding on the lower right runs perpendicular to the white tunic of the sentinel, reminding us of the organic origins of classical decoration. The sentinel is engulfed in blackness of half-opened door -- death of the sultan -- behind him. The black sucks his white profile like a black hole. Sentinel becomes a figure that guards and negotiates between the living and the dead. The alert black dog of Hades contrasts with the sleeping white dog in the street. 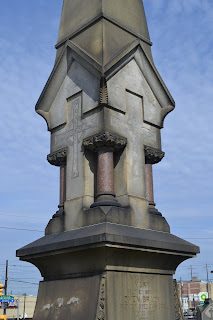 On my way back from laying out the Peschke show at Bryn Mawr College, I stopped at the Old Cathedral Cemetery, next to Our Mother of Sorrows church on 48th & Lancaster Ave. There's a monument there that matches a type I referred to as "Steeple Cross Grave Monuments" (Dec. 14, 2011). The tomb belongs to Owen Brady (+1891) and his wife Mary (+1887). On the right side of the monument, two additional family members are marked, John I. Brady (+1907) and his wife Mary (+1906).

This tomb is much much larger than the other two at Laurel Hill and Woodland. The columns are a red granite and the cross is engraved with a cross, an inscription "Dux Lux Rex Pax" and a crown. The base of the monument contains a small identifies its maker as "Billings & Co., Phila." This little detail should offer some insights on the dissemination of this type, its appearance and disappearance in the 1880s and 1890s. I did a quick sketch of the whole monument below: 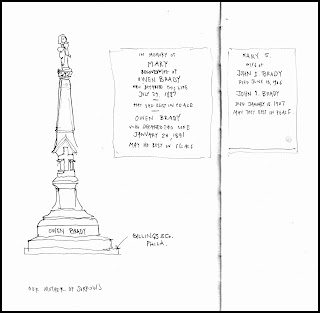 Posted by KOSTIS KOURELIS at 9:25 PM No comments:

During the last couple of days, I've been working on an essay for Philagrafika on Patricia Gómez and María Jesús González's installation Doing Time / Depth of Surface at the Moore College of Art Galleries. This is truly a ground-breaking project that blurs the lines between historic preservation and art installation. I have finished a draft of the essay that you can read here. Any comments are welcome.
Posted by KOSTIS KOURELIS at 9:47 PM No comments: