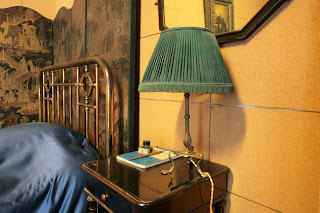 This week marks the anniversary of Swann's Way, the first installment of Marcel Proust's In Search of Lost Time. Ira Glass, creator of This American Life, begins a marathon reading of the novel from a hotel room in Brooklyn. After constructing a replica of Proust's own room (left), Yale's French Department embarks on a similar marathon. With Proust, the modern self encountered a subjective re-awakening through architectural memory. Recent experiments in the medium of Podcasts genealogically connect with Proust's narrative stream, where, “I was more destitute than a cave dweller; but then the memory—not yet of the place where I was, but of several of those where I had lived and where I might have been—would come to me like help from on high to pull me out of the void from which I could not have got out on my own.”

The soothing voices of radio theater have long disappeared from the airwaves, but a new medium, radio podcasts, have taken their place. The discipline of architectural history seems to have finally exerted some creative real estate in this medium. Radio nonfiction has became a dominant form of narrative, beginning with WBEZ's This American Life in 1995. Its creator, Ira Glass, went as far as to herald a new era when in 2007 he published The New Kings of Nonfiction. “We're living in an age of great nonfiction writing,” writes Glass, “in the same way that the 1920s and '30s were a golden age of American popular song. Giants walk among us. Cole Porters and George Gershwins and Duke Ellingtons of nonfiction storytelling. They're trying new things and doing pirouettes with the form. But nobody talks about it that way.” The success of such alternative voices morphed further into podcast radio shows, seriated online rather than the syndicated radio waves. July 2013 seems to have marked a watershed moment for podcasts, when Welcome to the NIght Vale became the most downloadable podcast from iTunes. Another marker of success came, when 99% Invisible, the premier architectural podcast, raised double the amounts it had pledged on Kickstarter for Season Four. With Proust and the podcast in mind, I review the podcasts that I have found to be most relevant to architectural history.

99% INVISIBLE
This is the most exciting podcast on architecture and design. It was created by Roman Mars in San Francisco and produced by KALW and the San Francisco American Institute of Architects. Roman Mars has been called the Ira Glass of architecture. Although he commands an increasing presence in the podcast universe, Mars is interested in the deflated, the historical detail and its traction daily life. In a recent interview in Mother Jones, he noted,  “I really wanted to focus on the everyday, even the mundane, and not the things that were shiny and new and exciting.” This month's fundraising success on Kickstarter means that the fourth season of 99% Invisible will be aired daily.

STUDIO 360Kurt Andersen's Studio 360, produced by WNYC in New York, is the oldest and most respected podcast on arts and culture with a Peabody Award under its belt. Although not devoted exclusively to architectural history, it often addresses issues of history and design. Its series, Design for the Real World and Redesigns, focus on issues of design, but the most useful series for architectural historians is the award-winning American Icons. So far, five episodes focus on architectural monuments: the Lincoln Memorial, Monticello, Falling Water, the Vietnam Memorial andDisneyland. Typically about 45 minutes long, these episodes have been excellent for teaching.

DnA: DESIGN AND ARCHITECTURE
Hosted by Frances Anderton, this KCRW production centers on architecture and design with a focus on the Los Angeles area. Anderton is a seasoned architectural journalist (The Architectural Review, L.A. Architect) who has become the voice of design in southern California. (See an Anderton interview here.) DnA's perspective balances the other geographic anchors (New York, Chicago, and San Francisco).

BUILDING MUSEUM
The National Building Museum in Washington, D.C., produces a different kind of podcast that distributes audio recordings of its programming. Typically based on lectures given at the museum, this podcast is exclusively dedicated to architectural history and is a MUST in the cadre of architecture listening. Two recent episodes by historian Elizabeth Hope Cushing and landscape architect Laurie Olin, for example, bring to the general audience the museum's symposium on Frederic Law Olmstead that took place on October 10.

ARCHITECTURAL LEAGUE OF NEW YORK
Like the National Building Museum, the Architectural League of New York podcasts all of its events and makes them available to general readers.

BBC - ARTS AND IDEAS
One way to remain adrift with what Britain's cultural conversation is to listen to Arts and Ideas, a podcast that weekly aggregates the best interviews by BBC Radio 3's Night Waves. Literature, fine arts, theater, and music predominate, but there is a strong architectural presence. New buildings are discussed and old buildings are reconsidered. A recent favorite is the discussion of zoo architecture. Here one can also learn about new buildings, such as Zaha Hadid's Aquatics Centre. Based entirely on interviews and conversations, this is one of the most intellectually charged podcasts. What makes British journalism interesting is the tradition of correspondents pushing their interviewers critically, rather than simply asking polite questions. Night Wave's correspondents (Matthew Sweet, Philip Dodd, Rana Mitter, and Anne McElvoy) press their interviewers with a critical edge.

BBC - IN OUR TIMESHosted by Melvyn Bragg, In Our Times is another highlight of British cultural journalism. The podcast's premise is simple. Bragg chooses a topic every week and invites three notable academics to discuss it. The topics are broad and rarely target individual monuments. As in other programs on arts and culture, architectural coverage is episodic. Programs include Architecture and Power (with architectural historians Adrian Tinniswood, Gavin Stamp, and Gillian Darley),Archaeology and Imperialism, the Gothic, Architecture in the 20th Century, Modernist Utopias, John Ruskin, and the Baroque.

WELCOME TO NIGHT VALE
Although most tangentially related to architectural history, Welcome to Night Vale is by far the most ambitious podcast. Narrated as a series of community announcements, Welcome to Night Vale transports the listener to an imaginary American town in the southwest. In its indeterminate subject, it touches on some fundamental issues of architecture and meaning. This podcast is impossible to describe, it must be experienced. In July 2013, it became the most downloaded podcast, surpassing the pioneering This American Life.

Given the rising number of podcasts and radio shows targeting architectural issues, it becomes increasingly apparent that certain other culture shows shy away from architecture. One of my favorite podcasts, Slate's CULTURE GABFEST, for instance, is pathetically poor on design. Similarly, the best Canadian culture show, Q,with Jian Ghomeshi, rarely tackles the built environment. Different productions have different strengths, and it makes no sense to DEMAND for venues greater architectural coverage. But it is disconcerting how certain articulations of cultural journalism do not see architecture in the same level as text or media creations. A different podcast genre is dedicated to traditional histories, such as Mike Duncan's THoR (The History of Rome) or Robin Pierson's HISTORY OF BYZANTIUM. These, too, spare little audio space for architecture.

To conclude, architectural podcasts fit into four categories that, for convenience, we might categorize as: 1. Story Driven, 2. Interview Driven, 3. Lecture Driven, and 4. Fantastical. The Story-Driven podcasts (99% Invisible) experiment with the journalistic voice by pursuing a story or a theme from the ground (replicating the experimental journalism of This American Life). The Interview-Driven podcasts take their cue from the radio interview show (Fresh Air, Radio Times, etc.) but target architectural guests. Lecture-Driven podcasts are simple translations of a live event that is recorded and made available on the internet. These proliferate across museums and organizations and are typically the least interesting in form. Finally, the Fantastical podcasts (Welcome to Night Vale) open new grounds to speak about architectural experience in unexpected ways.

In an era of digital uncertainties, architectural historians worry that their subject matter resists the digital translation. Its very physicality and three-dimensionality precluded the digital flatness. Podcasts offer one avenue of dreamy materialization.
Posted by KOSTIS KOURELIS at 8:37 PM 1 comment: 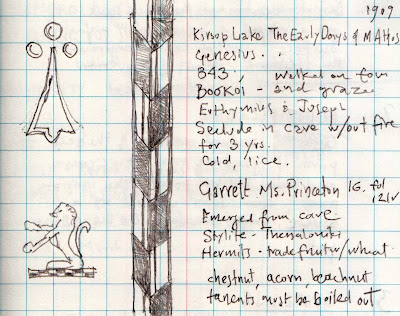 Posted by KOSTIS KOURELIS at 9:48 AM No comments: 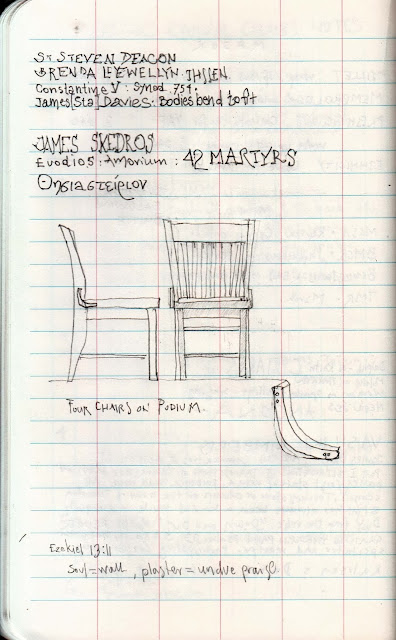 Posted by KOSTIS KOURELIS at 1:25 PM No comments: 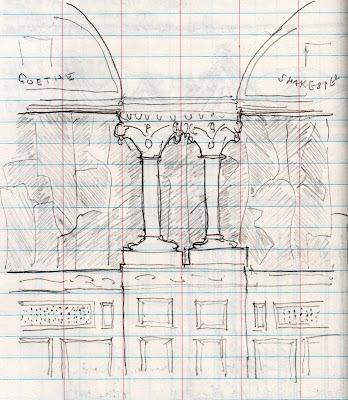 Busily thematizing Modernity and Byzantium, we missed Byzantium surrounding us.

Posted by KOSTIS KOURELIS at 1:19 PM No comments: 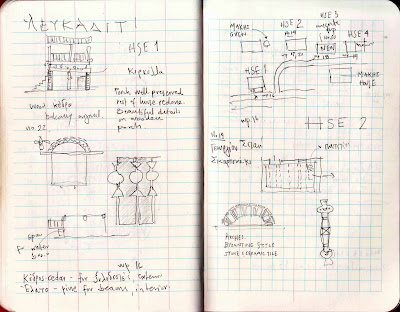 Why would you know of Leukaditi, a quite village in the remote mountains of Greece? You might know of Delphi, a world-famous ancient site nearby, but Leukaditi is just another dot in a sea of toponyms. At Delphi, the omphalos of the universe, even the most staunch materialist cannot help but succumb to the mysteries of place. My own revelation took place in the modest neighboring village, where I encountered four crumbling houses from the late 19th and early 20th centuries. I revisit my field notes from June 27, 2012, as I plan two undergraduate research collaborations to take place next summer. The houses of Leukaditi are important because they encapsulate an eternal struggle between organic and inorganic matter, in this case, between stone and wood. As in Delphi, the site is located at the nexus of two amply available building material: beautiful limestone from the mountain outcroppings and beautiful cedar from the forests that cover those mountains. Unlike vernacular architecture in other parts of the Mediterranean where wood and stone are clearly separated in the structure of the house (typically masonry walls; wooden openings and roof system), the vernacular of Phokis (as the region was known in antiquity) blends wood and stone on the exterior surface. Our research was first presented in Athens a few weeks ago in a conference on Mediterranean cultural heritage.

“The Lidoriki Project: A Historical Topography,” by Miltiadis Katsaros , Kostis Kourelis and Todd Brenningmeyer, Sixth Annual Congress, Science and Technology for the Safeguard of Cultural Heritage in the Mediterranean Basin, Athens, Greece, Oct. 25, 2013.
Posted by KOSTIS KOURELIS at 7:28 AM 2 comments: 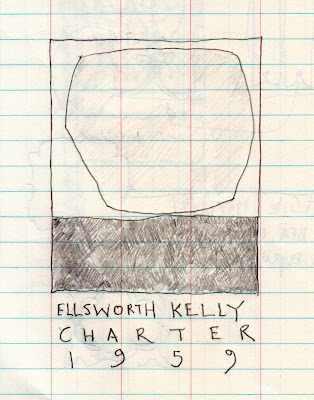 Charter, I realize, is one of my favorite paintings, which I discovered half a decade ago when living in Connecticut and teaching at an SOM-designed art building with bright orange chairs. I was reunited with the orange mass last weekend at the Yale Art Gallery. Contemplating the neighboring Lichtenstein (BLAM!) and Albers (squares), I found myself reminiscing of Fred Cooper, who came of age in Albers classroom and the tutelage of Marcel Proust. Incidentally, In Search of Lost Time is celebrating its centennial, and the Yale French Department has reconstructed Proust's claustrophobic room to host a reading marathon (see here). Two days before the Proust marathon, Vanity Fair published a list of the six greatest living artists, including Ellsworth Kelly (see here). Five years ago (almost exactly since I was last united with Charter), I was asked to defend the value of Ellsworth Kelly in a liberal arts curriculum. It's difficult to explain the elation this work solicits.
Posted by KOSTIS KOURELIS at 9:48 PM No comments: