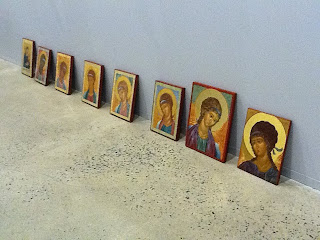 My class on Medieval Art and Architecture congregated at the Phillips Museum yesterday afternoon for a workshop on icon painting by Dorothy Thayne, F&M artist in residence. The drawing, or "writing" of icons involves a fascinating process of "layering veils." Using her own work, Dorry demonstrated the spiritual process of making icons. Teaching medieval art, one encounters the topic of devotional practices that modern students do not always comprehend. Seeing an icon painter perform the process best illustrates the technical dimensions of pigment layering, as well as, the symbology. It was a priceless experience. 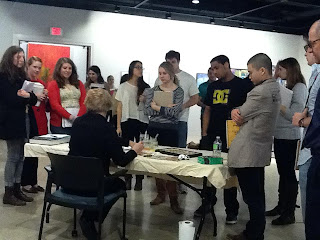 The workshop took place in the Dana Gallery of the Phillips Museum, where we are currently having our faculty show. Dorry's two icons are part of the exhibition. 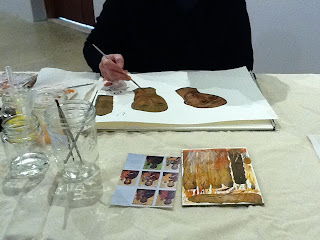 (Photos by Maureen Lane)
Posted by KOSTIS KOURELIS at 8:00 AM 1 comment: 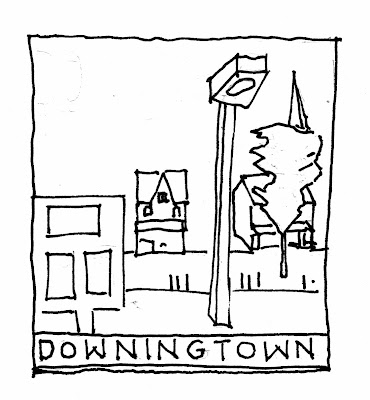 Posted by KOSTIS KOURELIS at 8:11 PM No comments: 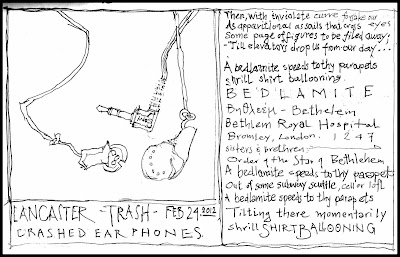 Objects of childhood that I picked up in the landscaping of Lancaster train station. The dinosaur was found near the base of a tree, while the pacifier was close to the pavement. Both are plastic in bright colors. These objects pay homage to Ben Leech's poetic archaeology in "Subterranean Recovery Crew," Old Weird Lancaster (Nov. 17, 2009), particularly figs. 3 and 9. 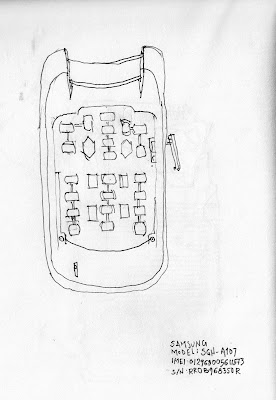 It's kind of crazy, how many discarded cell phones I find on my walk to work. I had blogged about the triptych at Lancaster station. Just a few yards to the west, I found yet another phone carcass the next day. Interestingly enough, it's the same brand and model. Differences in the IMEI and S/N numbers suggest a slightly variation in vintage or production. Otherwise the electronic board was identical with the previous find. This carcass is missing its keyboard. So what you see in my sketch is the metallic shapes that receive the pressure every time the user dialed a numbers or letter. Like the preponderance of Newport cigarette boxes, the discarded cell phones invite some archaeological questions. Is it common to jettison a cell phone? Surely some consumers recycle their phones, but what happens to the vast majority that don't? Is there any significance in the brand pattern or the value of the phone (dumb or smart)? Are these Samsung models particularly cheap and more likely to break? Is there something temporary, or sinister about these tossed phones, perhaps used in activities that necessitated instant disposal? For more Lancaster phone carcasses see here and here.

Collecting surface litter is one way of constructing an archaeological portrait of a city. As I walk to work, I spend a lot of time staring at the pavements of Lancaster. Yesterday, I decided to do a casual but systematic collection of all discarded cigarette boxes along two half-mile transects (east-west on Liberty Street, north-south on N. Queen Street). My sampling was very casual. I didn't record coordinates for every cigarette box, nor did I properly quantify all the variables. I picked up 26 cigarette packs in various state of deterioration. The drawings below show two examples. My survey lasted only 45 minutes, but produced a clear portrait of the neighborhoods that I walked through. The great majority of the samples were Newport 100 menthol cigarettes. 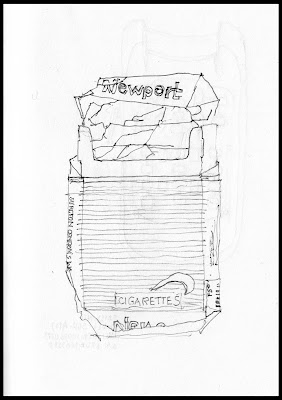 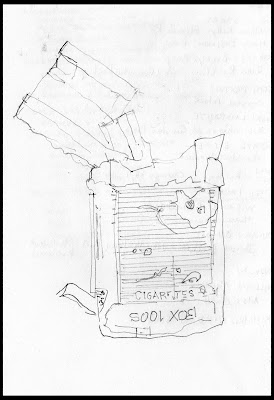 40°03'04.89"N, 76°18'55.53"W (Left); 40°03'08.3"N, 76°18'40.48"W (Right)
The preponderance of Newports is clear to interpret. Cigarette brands reflect a complex relationship between identity and consumption. We know from the sociological literature, for example, that menthol cigarettes represent an African-American and Latino population group. About a decade ago, menthol was deemed extremely dangerous. More affluent middle-class smokers seem to have abandoned menthols altogether, but poor urban populations continued to smoke menthols as an important element of their identity. The decrease of menthol sales, meant that cigarette manufacturers targeted menthol to African-American consumer most aggressively. One could do a sample of Newport cigarette ads and see the over-representation of African-Americans. Newport ads are seen through cities but rarely in suburbs.
There is much to say about the urban character of my sample areas. Lancaster's size allows one to cross multiple zones even within a mile's walk. With a little more effort, a complete portrait of Lancaster's cigarette identity could be mapped out. William Rathje's Tuscon Garbage Project has transformed the way by which we think of the archaeology of contemporary life. With a minimal effort, a structured derivee could thematize the surface of Lancaster. Finally, I want to give a thumbs up to Paul R. Mullins, The Archaeology of Consumer Culture (2011). It is a great introduction to American material culture and its relationship to consumption.
Posted by KOSTIS KOURELIS at 9:56 AM 2 comments:

Only a few months after its completion, the landscaping of Lancaster's train station is beginning to accumulate the shreds of material occupation. This afternoon, I picked up three broken parts of what was once a single cell phone, scattered over the course of about 5 feet. Almost exactly two years ago, I had picked up two fragments of a phone not far from here, see Pink Cell phone (Lancaster Object 001-002). What is it about the proximity of a train station that provokes cell phone disposal? Below, I started wandering through the interior landscape of the broken cell phone. I was particularly amused by the fourth line of the upper right text, "For more information call 1-888-987-4357." And for greater resolution click images below. 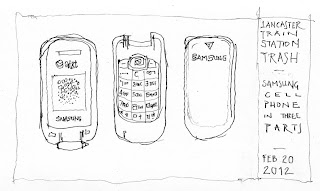 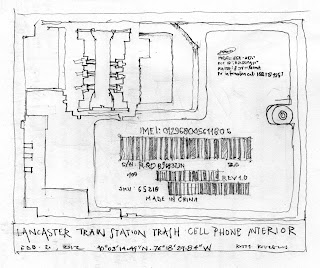 Posted by KOSTIS KOURELIS at 9:19 PM No comments: 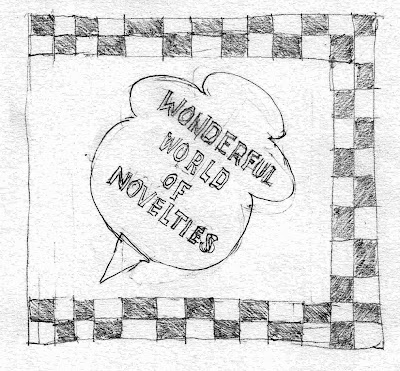 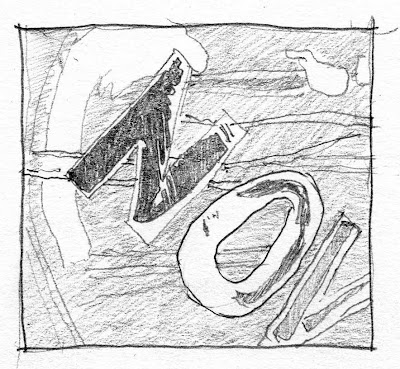 Around 11 Water Street, just North of King Street, you'll find a decommissioned truck from Rebman's, a shop of gifts and novelties. Rebman's was founded in 1954 and was a fixture in Lancaster's history as the place where everyone bought candy, costumes and games. The store closed in 2004. Chancing upon this late-20th-century graphic is what makes Lancaster a magical place. If you look at Google Earth's street image of Water & King Streets, you'll see the truck parked here (perhaps permanently). This truck, has thus become embedded in the city's virtual presence. 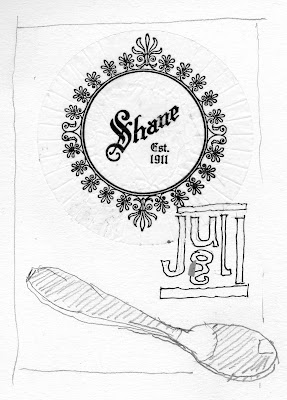 Posted by KOSTIS KOURELIS at 3:25 PM No comments: