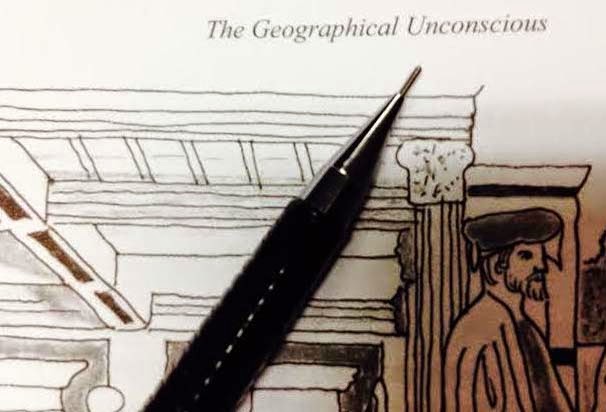 What happens when you start reading the introduction of a new book and you like it so much, you want to start telling everyone about it? You can play it all academic and start composing a formal review (a genre that you've become fond of) or you can start shouting. Blogging for me is either a form of shouting or a form of whispering, a paradox that has cursed the medium. So, I would like to shout-out that ARGYRO LOUKAKI's new book, The GEOGRAPHICAL UNCONSCIOUS seems absolutely fabulous. The book is not for the meek, a tour-de-force of 400-Ashage-pages, nor for the disciplinary square. It's a collection of SNAPSHOTS that cuts through geography, art history, philosophy, and cultural studies. What makes ME particularly excited is its art-historical ambitions, a field generally weak in the hyper-textual field of Modern Greek Studies. It's a book not limited to the ideological critique of ancient art history but spans from Piero della Francesco to Gustave Eiffel and from Peter Behrens to El Greco. I became aware of Loukaki's work through her last book, Living Ruins, Value Conflicts (2008), and I immediately placed her in a company of what might be called "the new Hellenist historiography" that has revised many of the tired notions about Greek visual and material culture (Yannis Hamilakis, Dimitris Plantzos, etc.) Thanks to scholars like Loukaki, anyone interested in the relationship between archaeology, art, and modernity more broadly must pay serious attention to Greek scholarship. Their breadth and sophistication takes modern Greek studies outside of its "area studies" box.

Since I have only skimmed the book and only read the introduction, I'll hold off for more substantive posts yet to come. But let me say one thing. The author uses a great visual strategy of "free sketches." Compared to the ambitions of the whole book, this will seem rather minor, but I think its important. Loukaki's free sketches are scattered through the book to make visual arguments. In bridges the subjective and the analytical, the visual and textual in a way that "academic writing" that has neglected. Free sketches (engravings, perspectives, etc.) were part of visual discourse before photographic reproduction created the illusion of objectivity -- what  Lorraine Daston and Peter Gallison's have called the second "epistemic ideal," see  Objectivity (2010). Loukaki's first free sketch of Piero's Flagellation of Christ (above) immediately captured me. This is the painting that I use in my introduction to Renaissance architecture. Unlike Masachio's Trinity, most commonly used for its simplicity and setting in S Maria Novella (see Trachtenberg textbook, etc.), the Flaggelation better communicates to students the weirdness of perspective. It's the best painting to show how perspective is an epistemic construction and very far from the real (and hence a good entry point for a socio-contextual Renaissance, via Michael Baxandall, etc.) So, I ask my students to sketch for themselves a caricature of the painting. Loukaki has redeemed me classroom tricks.

As Loukaki points out, the Marxist intellectual tradition had been traditionally weary of art (as either too bourgeoisie--which it is--or to be used only as a canvas for social messaging--which sometimes makes for bad art). Visual note-taking in whatever form it takes has been generally distrusted as a critical practice. Archaeologists and art historians have grown to distrust their visual notes, as the "objective" options of CAD drawings or photography gained legitimacy. The "free sketches" encourage a general re-entry into visual thinking through the hand. OK. Still a minor point, but these are the kind of things that matter.
Posted by KOSTIS KOURELIS at 10:00 AM No comments: 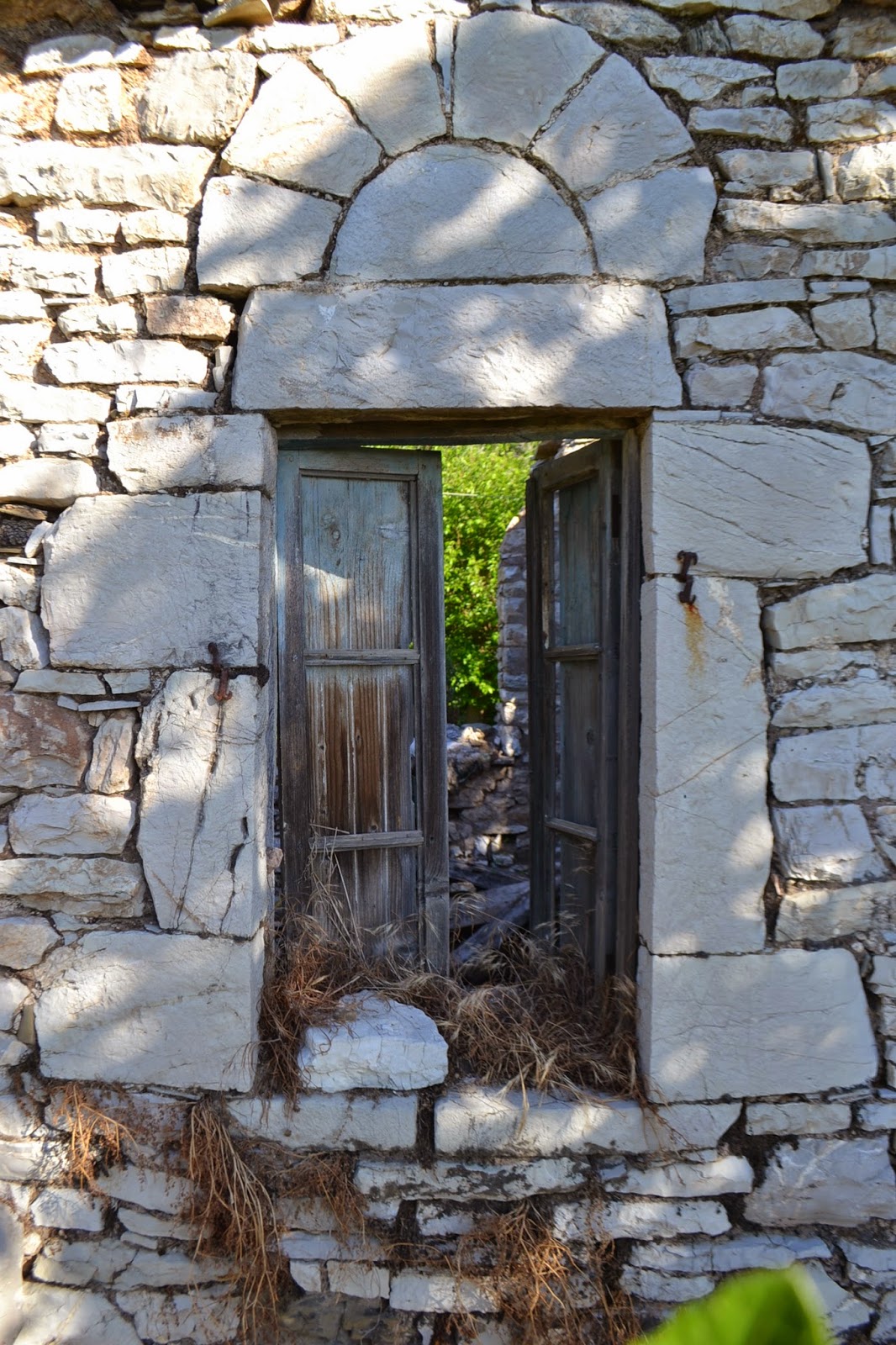 Paul Oliver, a foundational figures in the study of vernacular architecture globally, wrote in 1974, "the shelter of Greece has claimed more attention than that of any other country." In 1964, Bernard Rudofsky's exhibition "Architecture Without Architects" at the Museum of Modern Art ushered vernacular architecture into the American mainstream. Greek houses were highly represented in the exhibition. Rudofsky discovered Greek villages in 1929 for his PhD thesis on the vaulted houses of Santorini. The 1960s and 1970s were a golden age for the study of the Greek house leading to the major publication of Greek Traditional Architecture in 1983.

The Greek house played a prominent role in modernism because of its simplicity and material honesty. But without Le Corbusier, Brutalism, minimalism and the modernist orientation towards essential aesthetic paradigms, the Greek house loses its prominence. Postmodernism has ridiculed the reductivism of this modernist lens and, in the process, has pushed the study of vernacular architecture to the margins.

During the 1990s, when the Greek economic bubble started to get inflated, Greeks re-invested into their rural origins. Cheap labor -- unskilled Albanian stonemasons -- fueled and explosion of reconstruction projects. This was the decade of the Morea Project, when we documented the rapid destruction of the vernacular fabric under this rural "renewal" manifest in millions of Albanian walls made out of indigenous stone and concrete mortar. Interviewing villagers in the 1990s, we would ask "who has rebuilt your traditional house?" and they would say "northern Epirots," the euphemism for new emigrating Albanians. The stone-masonry traditions of continental Greece have deep roots in Epirus, who made up itinerant groups during the mid-18th-century agricultural boom that created most of the villages that we see today.

Now that the boom has busted, the Greek villages are becoming increasingly re-abandoned. The mad craze of rebuilding has slowed down. A new property tax is beginning to penalize real estate ownership. Abandoned at two previous economic crisis 1890s, 1960s, the Greek villages the rate of abandonment is evident again. Of course, many Athenians are returning to villages and rediscovering traditional ways of agriculture and economic independence, but they are not investing in architecture. From the perspective of historic preservation, a recession has positive effects in warding unchecked development.

A short season of fieldwork this summer made me realize that the preservation and documentation of Greek villages is under a new moment of crisis. Dwindling archaeological resources are applied to the touristically profitable and nationally sacred ancient sites, leaving the early modern village in further disarray. As archaeologists, we are well equipped in methods of studying deserted landscapes. We have developed surveying tools (photogrammetry, Google Earth, drones, etc.) to create a record. This will be invaluable to future scholars. A research agenda focused on deserted villages, moreover, will force us to confront heady ideological issues, such as the anxieties of devaluation. At the height of its 1960s abandonment, certain sections of the southeastern Peloponnese were acquired cheaply by German philhellenes. Something similar is happening in Spain this year, where British investors are buying up deserted houses. See, for instance, "Spain: Deserted Medieval Villages Available 'Free'" (BBC, Mar. 10, 2014). Studying deserted villages helps us think through moments of crisis facilitated by political or economic conflict. Asia Minor and Cappadocia are full of villages forcefully deserted by the expulsion of the Greek population in 1923. Once again, note how British tourists intersect with that heritage, in "Turkey's Religious Ghost Town" (BBC Travel, Aug. 5, 2014). Those deserted Greek villages have seen the most interesting Greek-Turkish collaborations in cultural heritage. The experiences of Detroit and "ruin porn" have also pushed forward the conversation over the pitfalls of aestheticizing someone else's real estate pain.

Without modernism's primitivist fantasy, the Greek house has lost its popular appeal. The Greek house continues to sell itself iconically, as a place form which to experience the Mediterranean's triple S's (sex, sun, sea). The brand was created as a national export by the National Organization of Tourism in the 1960s and it continues to replicate itself. Greek houses continue to be touristically marketed and consumed forming an important component of the economy. But the cultural capital expended is built on notions half a century old. Tourism is still riding on the golden age of  Greek vernacular architecture studies. I think that the time has come to revisit the Greek house though an archaeological rather than an architectural lens. A golden age of Greek vernacular studies might be in the horizon. We must de-essentialize the Greek house as a beautiful topos of man's coexistence with pure nature. Rather, we should essentialize it (for better or for worse) with an acute perspective of decomposition, abjection, loss. 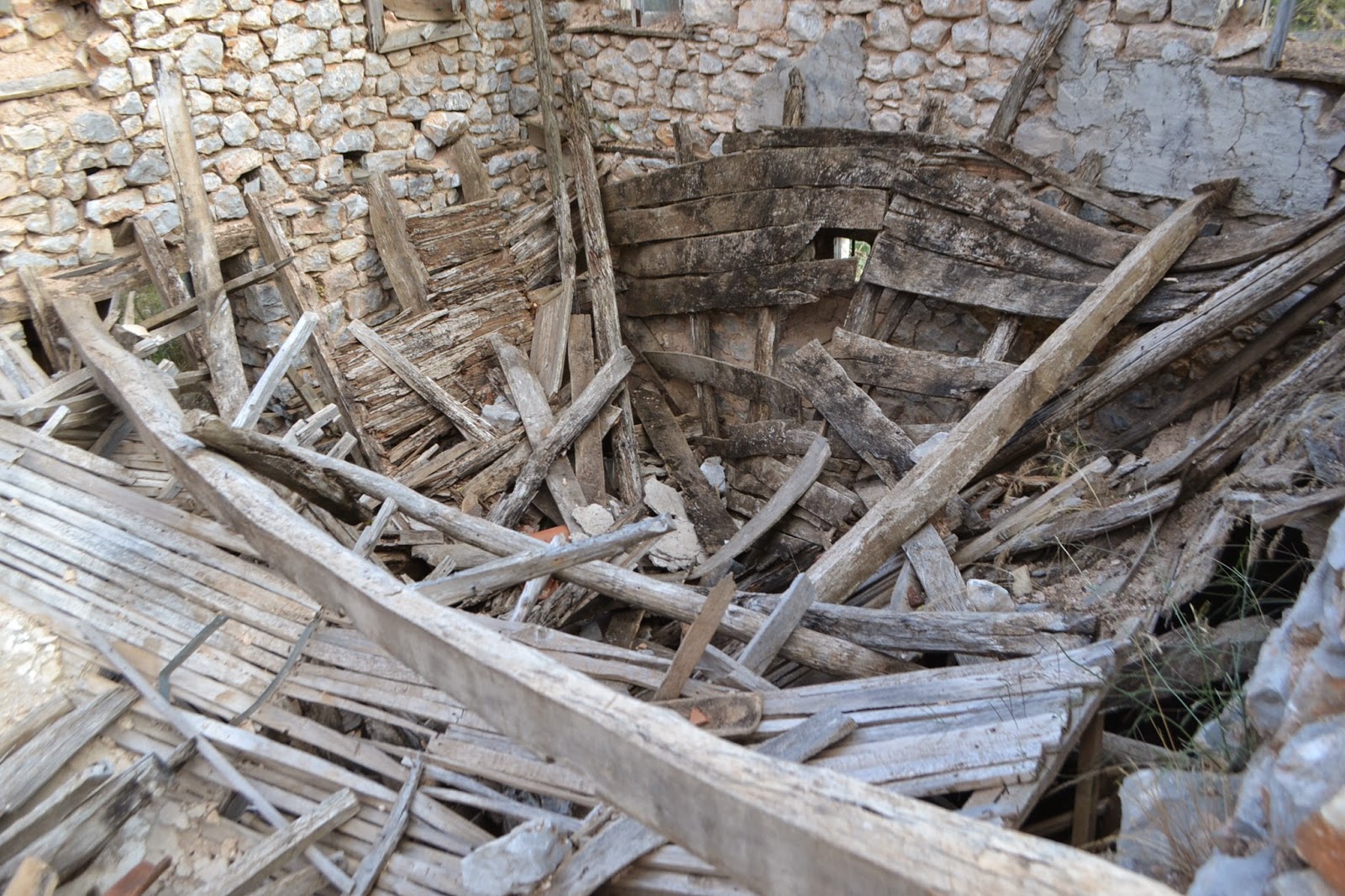 Posted by KOSTIS KOURELIS at 11:40 AM No comments: 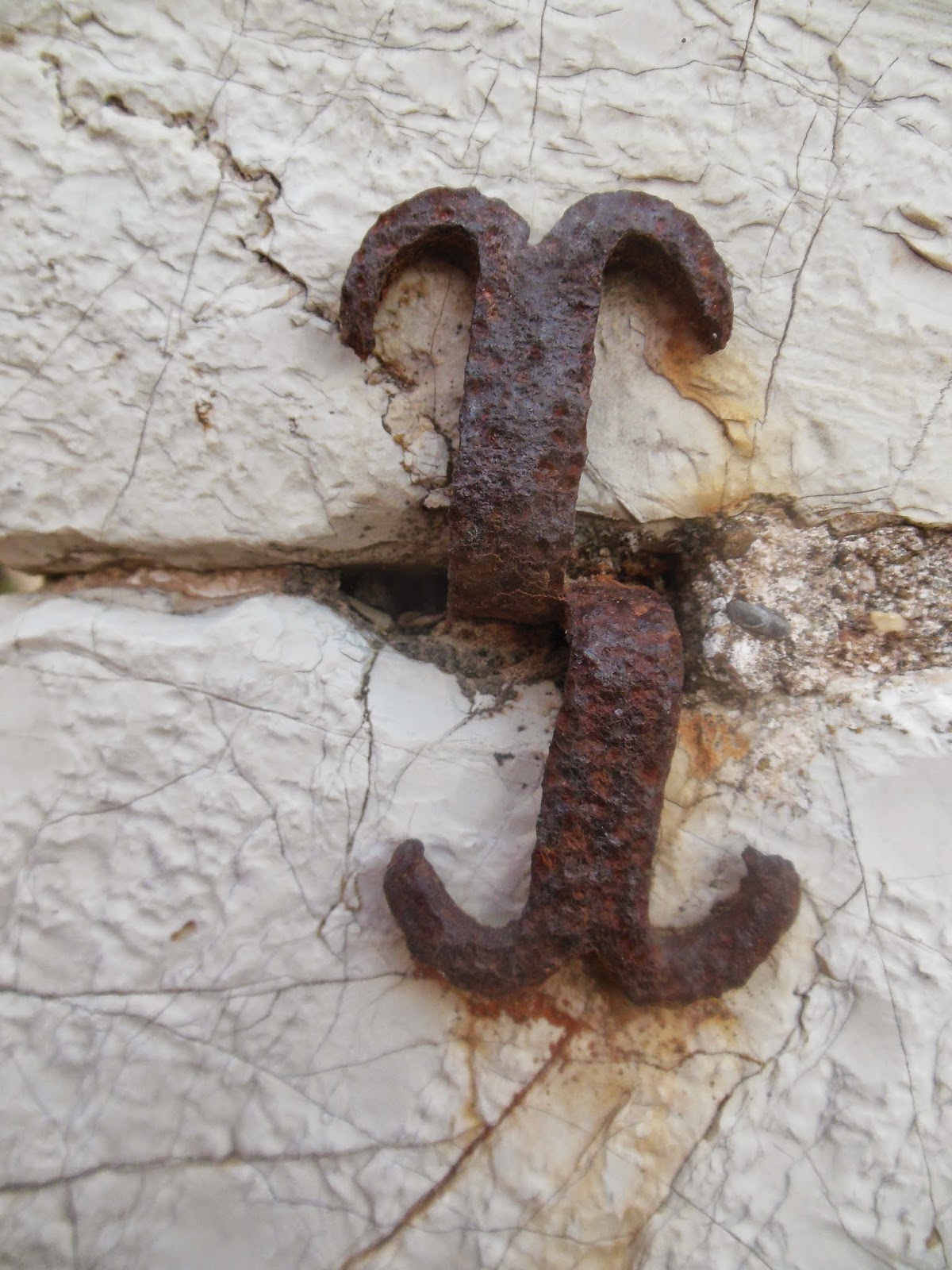 Bill Caraher has proposed a new blog series on Archaeology and Craft. I have spent some of my summer fieldwork documenting craft collaboration in Greek vernacular architecture. Consider the beautiful iron pin here, inserted between two limestone blocks, and pinned into the wooden sash of the door invisible behind the wall. In this tiny construction detail, we have a masterful collaboration between a mason, a carpenter, and a metalworker, masters of three mutually exclusive material. At the same time, I have been looking at American archaeologists of the 1930s. Raised in an Arts-and-Crafts pedagogy, a circle of progressive archaeologists began a scientific inquiry on Greek vernacular crafts. The physical and historiographic research, two sides of the same quoin, bring craft into focus. So, I am excited to engage in the conversation over the craft of archaeology at two levels.

But I'm not ready yet. What I'd like to note instead is this weekend's conversation in the New York Times. A. O. Scott's "The Squeeze on the Middlebrow" relates class stratification to cultural taste. Inspired by Thomas Piketty's "Capital in the 21st Century," Scott considers Piketty's ramifications of class inequality in cultural production. One way by which the middle class has been squeezed out into a high and low class is by the eradication of the middlebrow. The notion of middlebrow as an American mid-century phenomenon was first articulated by Russell Lynes in "Highbrow, Lowbrow, Middlebrow" (1949) and elaborated on by Dwight Macdonald in "Masscult and Midcult" (1960). In addition to Scott's essay, the New York Times book review invited two prominent thinkers Pankaj Mishra and Thomas Mallon to elaborate on Highbrow, Lowbrow, Middlebrow: Do These Kinds of Cultural Categories Mean Anything Anymore? This is a huge topic of discussion of course and it assumes a clear understanding of the unique character of cultural production in mid-century America. 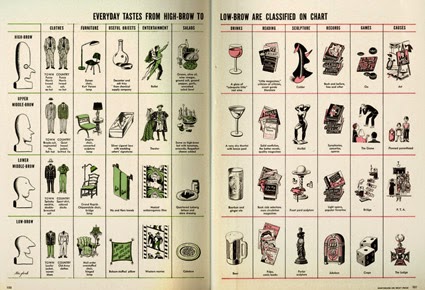 The conversation reminded me that the CRAFT gets implicated into the cultural typology in that it is shared by the lowbrow (who produces it) and the highbrow (who worships it) as a mode of eradicating the middlebrow who gives it a much lower cultural value. In Lynes words, "The highbrows would like to eliminate the middlebrows and devise a society that would approximate an intellectual feudal system, in which the lowbrows do the work to create folk arts and the highbrows do the thinking and create fine arts." The passage also reminded me of Thorstein Veblen's similar analysis in his 1899 "Theory of the Leisure Class," where he considered the upper class's embrace of premodern habits, like candlelit dinners, to distinguish themselves from the middle class (who uses electricity at dinner).

This post is just an open question. The avant-garde of the early 20th century loved folk culture for its purity and preindustrial authenticity. Modern art began to look increasingly primitive and non-western, as a strategy to critique mass production. The study of craft contains an inevitable tension between the academy (which Veblen argues get a special entry into the upper class) and the lower class. In the late 19th century, theorists of the Arts and Crafts built on a model of socialist utopia that bypassed the middlebrow problem. Any investment in craft at some fundamental level is an act of resistance to mass production and capitalist exploitation. But at the same time, the discourse of craft hides a strange alliance between high and low. Not sure what to make of this paradox yet, if only to throw it in the conversation.

Posted by KOSTIS KOURELIS at 10:49 AM No comments: