Continuing some thoughts and some screenings on the topic of Athenian Film archaeology, I return to the Athenian Agora excavations, America's most vivid archaeological presence in the world began in 1932. See my posting "Stella: Athenian Agora" (Feb. 13, 2010).

For much of June, I had been obsessed with the urban archaeology of the film Dream Neighborhood (1961): June 8, June 13, June 17, and June 18. The movie also implicates the Athenian Agora excavations in one scene, where the newly renovated Stoa of Attalos creates an important background. The Stoa of Attalos was restored by the Rockefeller Foundation between 1952 and 1956. It would have been under construction during the filming of Stella, but would have been freshly completed by Dream Neighborhood. 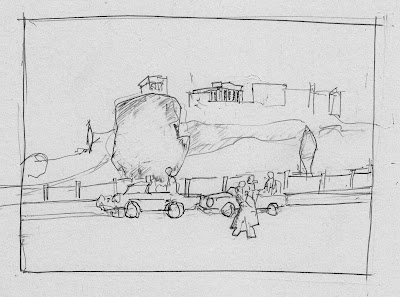 As I did with the funerary sequence earlier, I have sketched out a couple of scenes to help me in the framing of the filmic topography. The appearance of the Agora and the Stoa occurs when Stephania escapes the shanty town to meet her boyfriend and upper-middle-class youngsters for a spin to the suburbs. In the movie sequence she walks around Philopappou Hill and arrives at Apostolou Paulou Street, where two convertible cars wait for her. She hops on the convertible and the cars make a U-turn and spin around heading west. The figure in the middle of the street is another main character, Nekroforas carrying the lame child Themiakos, who's on his way to rob the villa of an old lady. You can see the scene here (cue 21:20 min.)

The characters enter a scene dominated by the Acropolis above. The image here signifies a modern Athens with automobile traffic, buses, a managed archaeological park and a beautiful setting. As the two convertibles spin around in dangerous speed, Nekroforas continues to walk towards the left. The camera zooms in and we can see more clearly his trench coat and the lame child. The camera also pans from West to East. The Acropolis disappears, while a long monument provides the visual focus. This is the Stoa of Attalos, restored by the Americans (cue 21:30 min). The long horizontal plain is mitigated by the peristyle rhythm of light and darkness. Above it rises the conic volume of Lykavittos Hill (prominent in yesterday's posting). 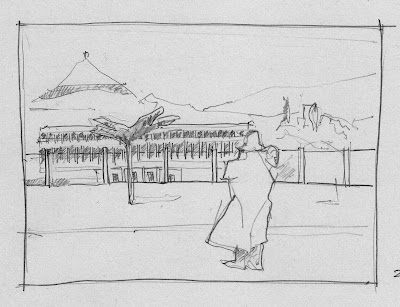 Nekroforas has his back turned to the camera, so he becomes a spectator of the urban archaeology. A few paths are visible through the fenced archaeological park, as well as some installations for the archaeologists along the pavement (I can't quite tell what these are yet). At this point, a bus enters the frame from the left, which is the bus that Nekroforas will take to the suburban villa. The camera continues to pan East (to the left) following the massing of the Stoa that concludes with a view of the Thesseion (Temple of Hephaestus).

In this scene, the ancient (Parthenon, Propylaea, Thesseion) and the modern (Stoa of Attalos restoration) are fused into one. The speed of the convertibles and the efficiency of public transportation overlap the modern construction of Athens that forms the dramatic foil to the shanty town around the corner. The Stoa of Attalos plays an important role in the dialectics of the urban story that is both temporal (ancient-modern), global (Greek-Anatolian-American) and socio-economic (dirty impoverished shanty town-clean monumental display)

Leontis, Artemis. "Archaeology in the Neighborhood: Views of the Ancient Agora and Other Ruins from Outside the Gate," Journal of Modern Greek Studies 27:2, (October 2009), pp. 417-425.

Sakka, Niki. "The reconstruction of the Stoa of Attalos: Ideological and Political Aspects," Philhellenism, Philanthropy, or Political Convenience? American Archaeology in Greece," ASCSA, Athens, May 18, 2010.

Thomspon, Homer. The Stoa of Attalos II in Athens (Princeton, 1959)
Posted by KOSTIS KOURELIS at 7:12 AM No comments:

A terrific sample of graphic design in the cultural column of the Greek evening newspaper Apogeumatini from 1956. Two 1930s fonts, "Evening" in black and "Hours" in white, float over a silhouette of the Athenian skyline. The city is drawn as an architectural section. The darkness suggests the sun's setting and pronouncement of evening outings. The afternoon hours are bracketed between siesta and nightfall. A second daily awakening is dramatized between the Acropolis on the left and Lycabettus Hill on the right, or between the Parthenon and the chapel of Saint George. The space between the two natural formations contains the cultural heart of Athens: Plaka, Monastiraki, Ermou, Omonia, the National Gardens, Vasilisis Sofias, Kolonaki.

The setting of the sun and the sweetness of urban darkness also marks a new social adventure, the watching of films. The newspaper graphic, in fact, is taken from a clipping that the Michael Cacoyannis Foundation has scanned and made available on line, where the director discusses the release of his movie debut. Windfall in Athens is one of the earliest movies to explore Athenian topography in its narrative, although the indoor scenes were actually filmed in a studio in Cairo. For the entire clipping, see "Ο κ. Μιχάλης Κακογιάννης ομιλεί δια τον Ελληνικόν κινηματογράφον," Apogeumatini (1956)
Posted by KOSTIS KOURELIS at 6:09 AM No comments: 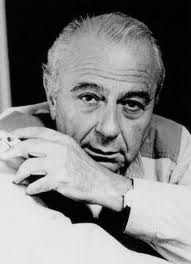 Micheal Cacoyannis died on Monday. He is one of Greece's best directors best known for his Zorba the Greek (1964), the film that has (for better or for worse) informed much of the mid-century notions of Greece. To learn more about Cacoyannis industrious life, see English obituaries in New York Times and Los Angeles Times.

I have blogged about the role that Athens plays in Cacoyannis movies and I continue to think about it. As a tribute to his work, I have started to watch all his films online. I also revisit an idea I'd like to build up into a serious study, Yannis Tsarouchis set designs for Stella. Vision, reflections, light-sources and the gaze across characters is exquisitely choreographed in the movie. Technical manipulations create an internal dialogue between the viewer and the medium of cinema that involves darkness, projection, illumination, emulsion and a game of shadows.

I think that the naked light bulb is an important character in Cacoyannis' film. Not only does it address the filmic process but it also speaks about electrification and modernity in postwar Greece. As I read the memorials on Cacoyannis and learn more about this life, I am struck by the theme of bright lights in Cacoyannis career as a correlate to the elevation of modern Athens as a character. The two themes come together in Cacoyannis pet project, namely the illumination of the Acropolis, which materialized in 2004. I find it amazing that the maestro of lights, the film director is responsible for the Acropolis light & sound show. Cacoyannis has set up a foundation, which continues his interest in the marriage of lights and monuments.

The bright lights of film enter another interesting biographical detail, Cacoyannis' discovery of Melina Merkouri as an actress. Merkouri had been rejected by all film studios. Stella was Merkouri's debut and Cacoyannis took some risk in casting her. Cacoyannis noted that he took a great risk for another reason, Merkouri's sensitivity to projected lights. I quote from an interview on the TV show SKAI Life (May 3, 2011), replayed on last night's SKAI news. Cacoyannis says (my translation) "Melina made her first film when everyone had rejected her as an actress. And I took a risk because the audition that Melina did was disappointing. Her large wonderful blue eyes could not stand the lights. She had a problem with lights." This is a wonderful footnote in light of the vivid illumination (both internal and external) in the film.

Cacoyannis neorealist naked light bulb has expired. But his legacy lives on and I encourage everyone to watch his early films online. 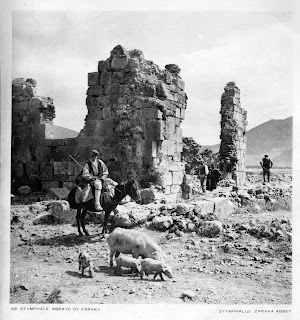 I have just finished a draft for an essay contribution to the final publication of the excavations at Zaraka, the 13th-century Cistercian Abbey in the Corinthia. Sheila Campbell, project director, is publishing a monograph through the Pontifical Institute of Medieval Studies. You can read my draft here: