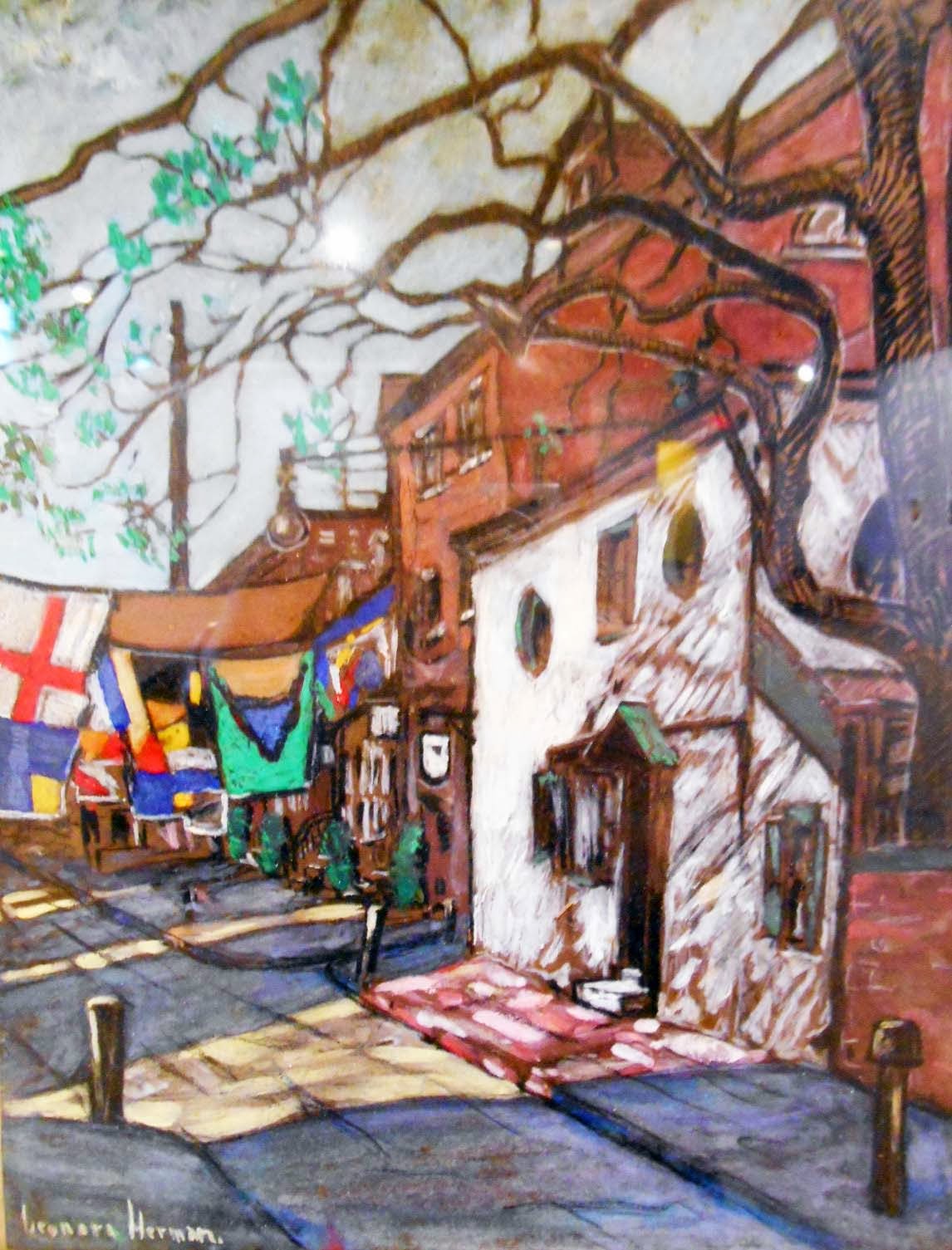 The city is the big theme at the Phillips Museum this academic semester. Complementing the traveling show Theresa Bernstein: A Century in Art, Art History major Ali Tufano has curated Art for Life's Sake: Perceptions of American Realities in the 20th Century. Tufano has brought out of the Phillips Museum's vaults a set of paintings, drawings, and photographs that have never been seen. The show includes a couple of relatively obscure female Impressionists that deserve our attention, Caroline Peart (1870-1962) and Leonora Herman (1888-1966). The latter is especially important for Franklin and Marshall College, as our studio building is named after her relative, Jacob Leon Herman (Class of 1916)

Featured in the exhibit is Leonora Herman's Camac Street, Philadelphia (1924), which opened the viewer into a remarkable historical street, as well as, to a series of questions regarding the role of the female artist in the city. This is the question that my colleague Linda Aleci raised in her lecture that compared Theresa Bernstein to Marguerite Zorach (recently curated at the Phillips Museum). For Aleci, Zorach had to leave New York City in order to create a more primordial and equitable domestic reality. It is much more difficult to answer that question for Leonora Herman since so little has been written about her life and works. In this scholarly vacuum, I try to re-inhabit Herman's painting in order to understand its contemporary urban context. I do this by a combination of observation and light research, using the Sanborn Fire Insurance maps that Penn State has recently digitized for the entire state of Pennsylvania. The relevant map is Philadelphia, vol. 2, (1916), sheet 143. 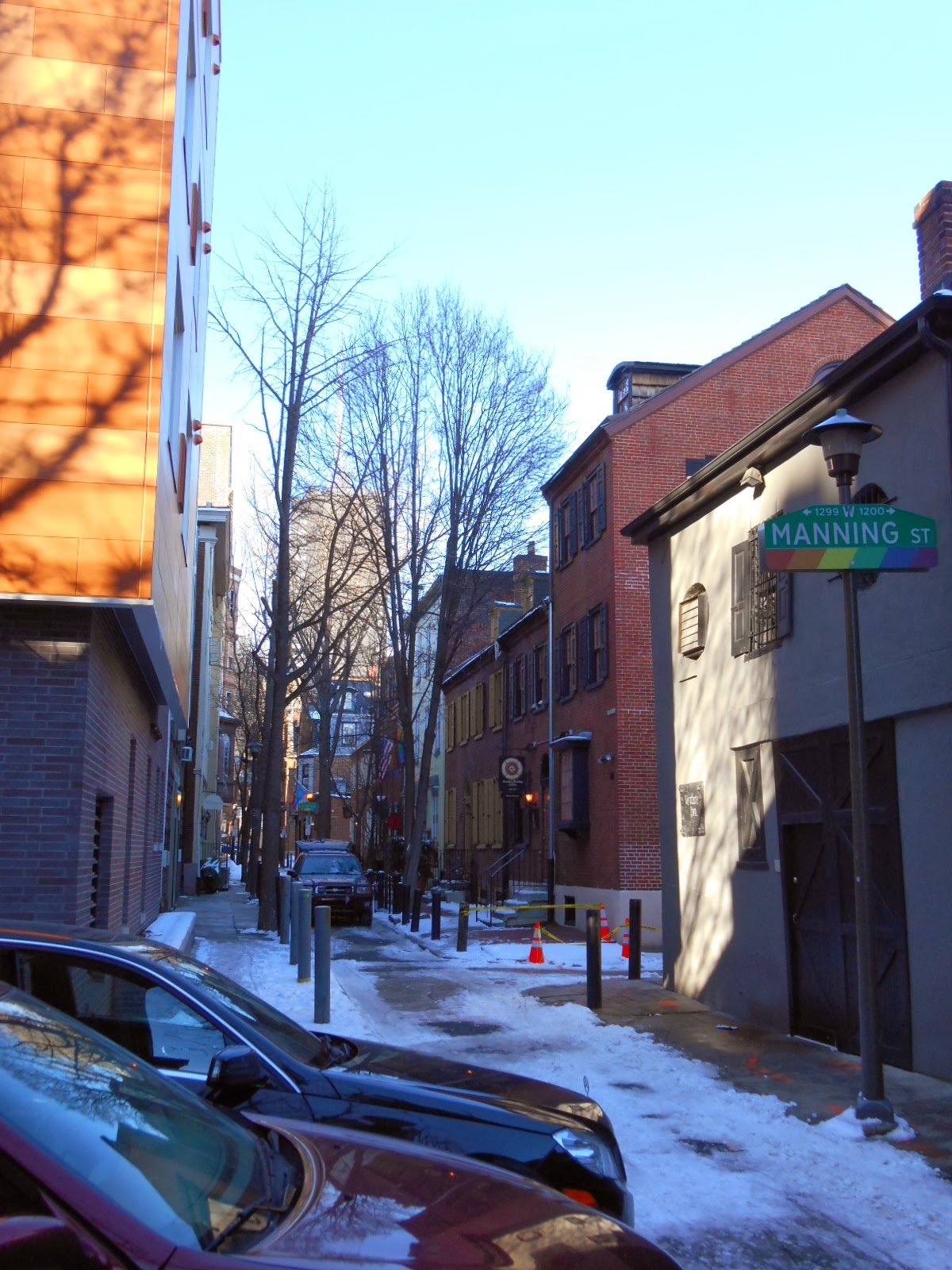 Camac Street is a North-South alleyway between 12th and 13th Streets in Center City Philadelphia. Like many such alleyways in the city, its prohibitive width has spared it from major automobile traffic and helped it retain its 19th-century charm. The block that Herman painted stretches between Spruce and Locust Streets and its best known for the innovative private clubs that it housed (and continues to house). Herman's painting focuses on the East side of the block. Built in 1825, a group of 12 row houses here were consolidated during the later 19th century into six private clubs, giving the block the name "The Little Street of Clubs." It is relevant for the artistic career of Herman because the block housed the Plastic Club, a women's fine arts club founded in 1897, to which Herman no doubt belonged. A little further down the blog, we find the oldest art club in the U.S., the Philadelphia Sketch Club, founded in 1860, but with membership limited to men. Both institutions continue to function today on the same spot. Herman's painting, therefore, should be seen as a celebration of artistic comradery and the new social roles offered to women, who would meet every Wednesday, attend a morning workshop, paint, and given the opportunity to exhibit works on a monthly show. At the Plastic Club, Herman would have interacted with leading women artists, such as Violet Oakley, who completed the murals of the Pennsylvania State Capitol in Harrisburg at the same time as Herman's Camac Street was painted. And we can also presume that the painting of Camac Street was once displayed at the Plastic Club on Camac Street. The hanging textiles that Herman painted across the alley way may also refer to the spirit of exhibition that was sanctioned here. 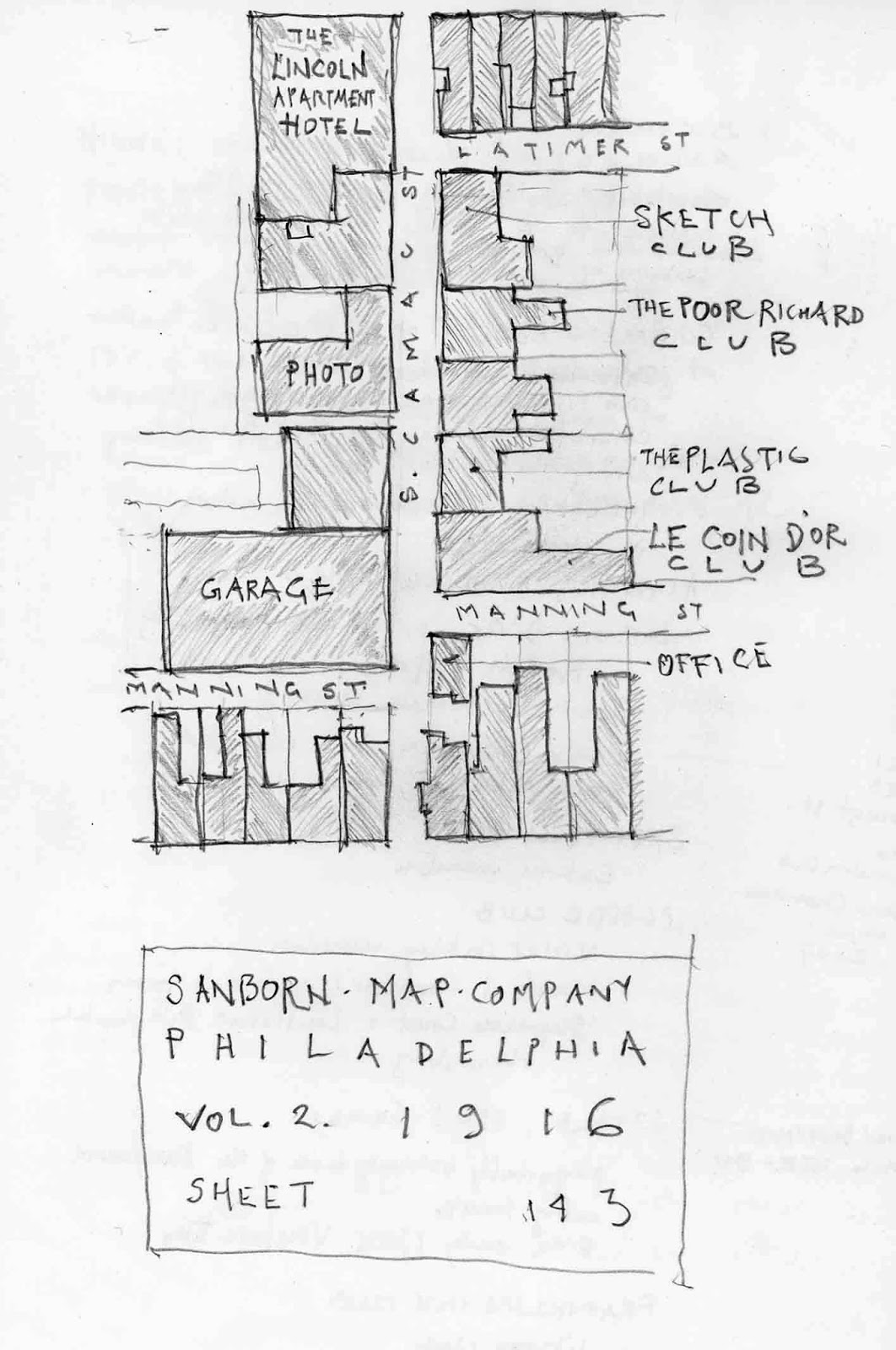 Using the 1916 Sanborn maps, we can get a little closer to the urban environment that forms Herman's subject matter. I have extracted the relevant information on the sketch (left). The centerpiece of Herman's painting in a distinctive white stucco building with round windows, illuminated by the afternoon light shining from the west on Manning Street. Originally a stable, 255 S. Camac Street is marked in the 1916 map as "Office." Soon after the end of World War I, in 1919, it was converted into a popular tea room, The Venture Inn, run by Blanche L. James. As the photo from the Free Library of Philadelphia shows (below), this cosy tea room also functioned as an art shop. Although I am not sure if this information was known when Herman painted Camac Street in 1924, the stable had been connected to the the underground railroad. In later years, urban myth developed that the stable was originally owned by the Barrymore family of actors, but that seems to have been fabricated. Today, the Venture Inn is a centerpiece of gay pride, housing Philadelphia's oldest operating gay bar and restaurant.

The second prominent building shown in Herman's painting is the two-story red brick at 252 S Camak St, that was restored in the 2000s into the Acanthus Office Building. When Herman painted it, the structure housed Le Coin d'Or, a private club devoted to French cuisine. The space once housed a leading French restaurant, Deux Cheminees that moved one block away, and ultimately closed in 2006. Next in line, in 247 S Camac, which continues to house the Plastic Club. Rising beyond it is 239 S Camac, which housed the Charlotte Cushman Club, named after a famous actress, and first female director of the Walnut Street Theater around the corner. Cushman's Lesbian history makes this an appropriate member of today's Gayborhood. The function of the Cushman Club was to offer residence to traveling female actresses passing through Philadelphia. Although not visible in Herman's painting, two more clubs continue northwards. The Poor Richard Club (241 S Camac) was founded in 1906 by members of the advertising industry. And finally the Sketch Club (235 S Camac) provided a meeting place for artists like Thomas Eakins and W. C. Wyeth. 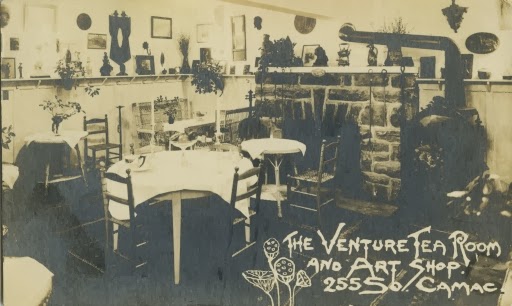 Having performed this archaeological review of the spaces within the painting, the work begins to take up some additional significance. Some elements need further clarification. For instance, what are those fabrics hanging between the Coin d'Or club and the garage across the street? Do they resemble flags? Might this be a reference to armistice celebrations? Furthermore, we see a finial or sculpture rising out of the corner of the corner of a distant building. What exactly is that? It is not there today.

Herman's Camac Street is more than a recording of contemporary social realities. It has an artistic value of its own that needs to be brought into alignment with the depicted subject. The interplay of light and shadow, the bright post-Impressionist colors, even the modernistic shapes of the stucco'ed Venture Tea Room command our attention. With the archaeological information in place, we might be able to unpack this work further and evaluate the work of this female artist in the cultural practices of Philadelphia.

The image of the painting, courtesy of the Phillips Museum of Art, Franklin and Marshall College. For more historical images of Camac Street, see here.
Posted by KOSTIS KOURELIS at 12:05 PM 1 comment: