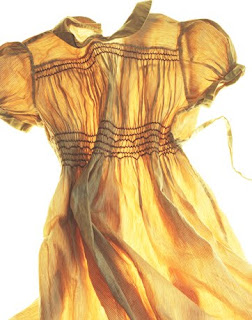 In addition to the memoir (Just Kids) and the Steven Sebring documentary (Dream of Life), Patti Smith has produced another kind of life narrative, articulated through objects (see earlier posting here). An exhibit, Objects of Life at the Robert Miller Gallery features 14 objects that have been significant to Smith and her collaboration with Sebring. They include Smith's childhood dress (left), her Land 250 Polaroid camera and a tambourine made by Robert Mapplethorpe. I hope to catch this show on its closing day (Feb. 6, 2010), when F&M takes its Art History majors to New York.

The exhibit is the first of three that will focus on various themes in Smith's art (see press release). The film Dream of Life shows Smith obsessively engaged with objects. Objects of Life takes the documentary narrative into a different curatorial and archaeological dimension. Unlike traditional archaeological presentation, Sebring/Smith's 14 objects point to inter-subjectivity possibilities and relate to the curatorial themes that Orhan Pamuk raises in the Museum of Innocence.
Posted by KOSTIS KOURELIS at 2:48 PM No comments: 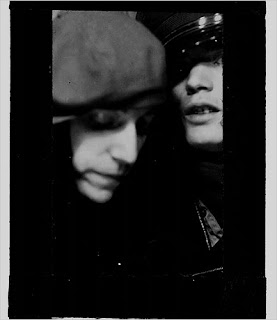 Over the Christmas holiday, I chanced on the Patti Smith documentary that I had heard about on Studio 360. We had just unloaded the U-Haul, moving to Philadelphia, and the WHYY feature somehow reaffirmed the move to an an urban capital. Patti Smith herself has roots in Philadelphia, a fact that she talked about at length when I saw her perform exactly 8 years ago, at the Keswick Theater, Dec. 27, 2001. That was a special concert for me. I went with my best friend Yorgos and we were both amazed by the number of older people (like us) in the audience who even brought their children. Smith's own mother, who lives nearby, was in the audience and both Smith's sister and son played with her onstage (see a review here).

Soon after Patti Smith lost her husband (Fred Smith of MC5) and her brother (Todd) in 1994, REM's Michael Stipe caller her out of the blue to offer condolences; he also recommended a photographer. Steven Sebring entered Patti Smith's life a that moment, documenting the experiences of an ordinary human being rather than the legendary "godmother of punk." Sebring's filming became the documentary Patti Smith: Dream of Life that premiered on Dec. 30, 2009 on PBS's Point of View. Dream of Life is hauntingly beautiful capturing the creases in the artist's life. I also enjoyed Sebring's focus on Smith's children, especially Jackson Smith who is married to Meg Ryan (of the White Stripes). In many ways, Patti Smith's story after her marriage to Fred Smith is a life centered around Detroit (Saint Clair Shores). Documentaries on rock musicians tend to follow generic lines. Dream of Life breaks away from the mold and becomes a creative enterprise in its own right.

Patti Smith has also just published an autobiographical work on her relationship with photographer Robert Mapplethorpe (1969 booth photo, top). Just Kids was released today (Ecco, 2010). Just as Dream of Life takes us to the period after Smith's New York apotheosis, Just Kids takes us to the period before. For a review of the book, see Janet Maslin, "Bohemian Soul Mates in Obscurity," New York Times (Jan. 18, 2010), pp. C1, C8. Maslin points out that Smith's growing up with Mapplethorpe took place before many of the disturbing pictures that earned Mapplethorpe his late notoriety (and censorship by the NEA). I am looking forward to matching the Sebring documentary with Smith's own reflections. After all, Smith is just as much a writer as a rocker. Returning to the home where I spent my own growing up, I'm especially susceptible to such stories. It was in this old/new home that I first admired Patti Smith.
Posted by KOSTIS KOURELIS at 9:16 AM No comments:

The Chronotope of Medieval Greek Romances

Only a few days before the Spring semester starts, and I indulge myself at Van Pelt Library by skimming through some new books on Byzantine matters. The Variorum Reprints series has issued a collection of essays by Roderick Beaton, the esteemed literary historian of medieval and modern Greek, From Byzantium to Modern Greece: Medieval Texts and Their Modern Reception (Aldershot, 2008). Although rushed by the pending syllabi that need to be written, I take a filling gulp of Beaton and read, “The Poetics of the Vernacular Greek Romances and the ‘Chronotope’ According to Bakhtin.” (forthcoming in Papers of the Conference Neograeca Medii Aevi no. 6). Beaton explores Mikhail Bakhtin’s “chronotope” notions, developed in the late 1930s and completed shortly before the literary critic’s death in 1975. I haven’t read much of Bakhtin, except his Problems of Dostoevsky Poetics (Minneapolis, 1984), which informs much of how I understand modernist literature. Bakhtin defines chronotope as follows: “In the literary artistic chronotope, spatial and temporal indicators are fused into one carefully thought-out concrete whole. Time, as it were, thickens, takes on flesh, becomes artistically visible; likewise, space becomes charged and responsive to the movements of time, plot and history,” The Dialogic Imagination: Four Essays, ed. M. Holquist (Austin, 1981), p. 84. In other words, the chronotope defines relationships of time and space internal to the fictional narrative. Bakhtin discusses two distinct chronotopes in the Hellenistic novel and in the chivalric novel. Beaton takes Bakhtin’s categorization and applies it on the vernacular Greek romances of the 13th century (Kallimachos and Chrysorrhoe, Belthandros and Chrysantza, Libistos and Rhododamne). Beaton observes that the Byzantine novels are divided into two parts, the first magical the second realistic. The magical and realistic halves provide a background of adventure, the tests of love. Interestingly enough, none of the characters have real geographic origins. The novels have a clear separation between what Bakhtin defines as “biographical time” and “adventure time.” Unlike the western chivalric novel, the Greek novels disguise no allegory, nor do they convey a Christian moral. Beaton concludes that the Greek vernacular novels are a hybrid of the two chronotopes and, thus, articulate “the experience of conflicting and overlapping identities that must have been the reality of a Greek-speaking world fragmented in the wake of the Fourth Crusade.” Beaton argues that the lack of specificity in time/place allows the Greek reader to occupy “the porous boundary” between Byzantine and Frankish rule. Beaton makes a fascinating final observation. Unlike any predecessors in the genre, the heroes and heroines of the novels are emphatically foreign and displaced. If one could articulate a unique chronotope for this literature, it would be the following: “It could even be suggested that the defining characteristic of the chronotope of these romances is precisely this: that time and space are made to function in such a way that the principal characters are presented as multiple exiles.” (p. 13)
Posted by KOSTIS KOURELIS at 10:55 PM No comments: