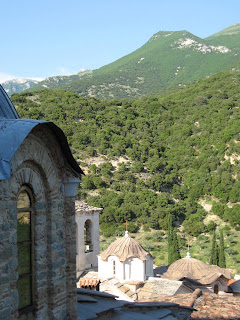 One often plays imaginary worlds. I know that the notion of fantasy and doctorate dissertation usually occupy mutually exclusive realms, but for many of us for whom the dissertation has receded into the chambers of the distant past, the process of a PhD can be sufficiently romanticized. Recently, I've been thinking that in an ideal world, I would love to be starting a new PhD, embarking on that exciting decade that is typically the archaeological thesis. Surrounded by a community of idealistic novices but still attached to the womb of wise advisors, graduate school is pretty damn great. With the new year, I asked myself, "what would be an ideal world dissertation topic," and this one topic keeps coming up as my top choice: Landscape Archaeology and Literary Landscapes of Greece: 1880-1940. In this imaginary new dissertation, I would basically read all major Greek poetry, novels, and short stories from the 1880s to the 1930s and analyze the representation of the Greek landscape in all its particularities and idealizations. I would then take that information and compare it with the real landscape to the extent that surface survey and social history allows us to reconstruct it. In so many ways, it would be an attempt to write Raymond Williams' The Country and the City (1973) from the Modern Greek perspective. Williams' study, which essentially spearheaded a whole tradition of peasant studies and Marxist literary criticism, is a book that I keep returning to over and over again.

One of the reasons that makes this dissertation a fantasy is the fact that I am not trained in literary criticism, but I know a bit more about landscape archaeology. My ideal committee for such a dissertation would match a literary and an archaeological mentor. Once again, in an ideal world the literary supervisor would be Artemis Leontis, Gregory Jusdanis, Roderick Beaton, or Dimitris Tziovas, while the field survey supervisor would be Timothy Gregory, Michael Given, Jack Davis, Cyprian Broodbank, Jim Wright, or Bill Caraher.

In an imaginary thesis proposal, I would stress that between the 1880s and the 1930s Generations of Greek writers, incredible attention is placed on the Greek landscape, contemporary institutions and folklore. Some preliminary work by literary historians have already been laid. In 1992, Journal of Modern Greek Studies devoted an entire issue on the relationship between place and time in Modern Greek literature. What many scholars have noted that Greek nationalism of "The Great Idea" necessitated the conflation of historical time with geographical space. Archaeological monuments, sites and landscapes were central to this project as spatial entities with intense chronological auras. The time/space conflation is nothing more than the German late-18th-century tradition of German Romanticism and a concept of emotive history articulated by Herder, Goethe and others. The romantic conception of the Greek landscape was both imaginary but also grounded on lived experiences. Greek writers used the landscape as a laboratory. In just half a century, they constructed a landscape that has become so pervasive in the mindset of modern Greece, that people have assumed it as natural, rather than an ideo-cultural construct.

You might have guessed that one of the reasons I'm reading Vizyenos is to identify the beginnings of this imaginary new dissertation. As far as I can tell, the project must begin with the 1880s Generation, with Realism, and particularly with Papadiamantis, Vizyenos, and Palamas. I have sporadically read these authors, especially to reconstruct the imaginaire of the contemporary archaeologists like Anastasios Orlandos (see DO paper). But I have never systematically read them with an eye for the landscape. One question at stake would be the degree to which various authors dwell in the real landscape or in a subjective landscape. Christopher Robinson has noted a dialectic between real and subjective in Modern Greek poetry. Realism takes over in the 1880s but it is foiled by modernists who shift attention to subjective interiors, such as Cavafy and Karyotakes. The Karyotakes tradition was criticized as anti-national, for taking the reader out of the landscape and shutting him inside his Athenian bedroom. Robinson observes that the Generation of the 1930s continues the landscape stylization of the 1880s with a dose of subjectivity from Cavafy and Karyotakes. See, Christopher Robinson, "Greece and the Poetry of Place, 1880-1945,” Journal of Mediterranean Studies 2 (1993), pp. 183-195.

The starting point for an analysis of place would have to be Peter Mackridge's essay in the same volume, "The Textualiation of Place in Greek Fiction, 1883-1903,” Journal of Mediterranean Studies 2 (1993), pp. 148-168. It would be supplemented by Michalis Chryssanthopoulos, “Anticipating Modernism: Constructing a Genre, a Past, and a Place,” In Greek Modernism and Beyond: Essays in Honor of Peter Bien, ed. Dimitris Tziovas, (New York, 1997) pp. 61-76. The study of Vizyenos would start from Chryssanthopoulos, Γεώργιος Βιζυηνός. Μεταξύ φαντασίας και μνήμνς (Athens, 1994).

The specificity of place mattered greatly in the 1880s. On the pages of Estia, the literary magazine that pushed the Realist generation, Nikolaos Polites would criticize authors for incorrect topographical references. In other words, the literary author would become a scientific geographer. Panagiotes Moullas gives examples in his 1980 edition of Vizyenos collected short stories (p. λθ'-μ'). The author of "Shadows of the Past" loosely refers to a bay and a cave in the beach of Kalamos. Nikos Polites raises the following criticism in Estia 362, suppl. (Dec. 4, 1883). "The author commits a geographical error ... inexcusable for a Greek writer who has the responsibility of knowing his country well." In another instance, the author of "Chrysoula" refers to a village by the name Kastania. Polites writes, "the author is careless. Although many villages have the name Kastania, none of them is on the sea... at least as far as I know."

In addition to a birth of topographically-specific literature, the 1880s saw the beginnings of scientific topography. Historians would leave the comfort of their libraries and search the Greek countryside for toponyms and monumental specificity. Societies of "nature-lovers" (φυσιολάτρες) and hikers (ορειβάτες) were formed in urban centers. The Greek middle-class infiltrated the folkloric countryside for entertainment and poetic inspiration. Foundational studies of historical geography coincided with the rise of poetic geography. Stephanos Dragoumes, Χρονικό του Μορέως. Τοπονυμικά – τοπογραφικά – ιστορικά (Athens, 1921) , a topographical analysis on the medieval Chronicle of the Morea, is a good example. While starting my real dissertation back in 1998, I was lucky enough to be Gennadios Library fellow and browse through the collections. The Gennadios has an incredible collection of a genre of Greek tavelogues from the late 19th century that have not been studied very well. Most traveler literature has focused on foreign travelers instead of Greek travelers in Greece. The latter had an obvious cultural and linguistic advantage that make their publications that much more valuable. Some of my favorites are Chrestos P. Koryllos, Πεζοπορία από Πατρών εις Τρίπολιν επάνοδος εις Πάτρας διά Ναυπλίου και Κορίνθου (Patras, 1890) and the following year a work written with his brother Theochares Koryllos, Πεζοπορία από Πατρών εις Καλαμάς (Athens, 1891). When I first encountered these texts, I was tapping them for particular information about the topography of the Northwestern Peloponnese. I haven't revisited them since and I would love to study them as a genre. The tradition of amateur topographical history begins with the romantic 1880s but continues to this day. Doing fieldwork through the Peloponnese, the Morea Project met dozens of typically retired local historians and collected their self-published pamphlets. I remember that my own father's greatest ambition was to write a local history of his village as a retirement project.

Before leaving this fantasy of a future dissertation, I want to mention another type of primary text, which I encountered while working with Nikolas Bakirtzis at Saint John Prodromos Monastery in Serres. Factual description is coupled with romantic stylization in yet another genre that is neither literature nor historical research. When conducting a landscape field survey of Prodromos' hinterland, we studied a wonderful Proskynetarion written by the monastery's abbot Christophoros. The Greek Proskynetarion was published in Leipzig in 1904. It offers a realistic account of the monastery, which begins with a description of its natural setting and extra-mural life, "Χωρογραφία της Ιεράς Μονής." The document is wonderful in its employment of romantic idealism and a flowery language to describe place with scientific specificity. The photograph above is from the beautiful natural setting of Prodromos (by Matthew J. Milliner). We presented the landscape study at the last Modern Greek Greek Association conference in Vancouver, see here. See official project website for description, here. It is with great sadness that I heard from Nikolas that the south wing of the monastery burned down on Dec. 13, see here.

Posted by KOSTIS KOURELIS at 1:11 PM