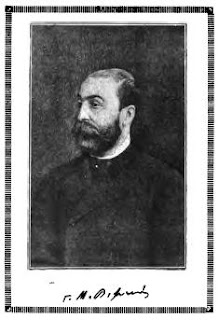 Thinking about buried fetuses in the floors of Byzantine houses has lead me to reconsider notions of architecture defined by functionalism, or the tight association between human activities and spatial definition. Specialized functions in domestic architecture, for instance, are the product of the middle class. Rooms did not receive dedicated uses until the late 18th and 19th centuries. Modern architectural education, from the Beaux Arts to the Bauhaus, assumes functional integrity; it's no surprise that modern architectural history is a typological discipline.

To put it another way, pre-bourgeois architecture was multivalent in respect to function. Turning our consideration from the Byzantine house to the Byzantine church, we find gray areas of usage. We may, for instance, ask the question "did the house ever function as a church" or "did the church ever function as a house"? I will not answer these questions now but will simply mention one social practice from the late 19th century that domesticated the space of the church.

The case study comes from a short story by Georgios Vizyenos, "My Mother's Sin" ("Το αμάρτημα της μητρός μου") published in 1883. Vizyenos's short stories are of critical importance as heralding a new realist era in Greek literature. Before Vizyenos, Greek literature was like, all literature of its time, universalist in nature. It was not till the 1880s that a realist ethos emerged (influenced by Zola, etc.) focusing on a real rather than an imaginary Greece. For the first time, Greek writers turned their attention to contemporary (rather than historical) Greece and sought to document the ethos of its rural reality. The genre was called "ethography," a term which Roderick Beaton translates as "folkloric realism."

In "My Mother's Sin," Vizyenos tells the story of a family from his home town, Vize in Thrace. The story begins with a very sick child, Annio, whose disease consumes a family's life and resources. For 19th-century folk society, sickness was natural under two conditions concluding either to death or to health. A prolonged state of sickness was unnatural. The last resort for any such predicament was a supernatural diagnosis. Once all other remedies failed (in producing health or death), the body of the diseased was brought into the church, assuming that the prolonged disease. The supernatural cure required that the sick individual sleep for 40 days in the church, where the battles of good and evil could resolve their conflict. In the church, the typically incapacitated body would be attended by the family, who naturally moved into the building, too. Vizyenos description of this practice is fascinating, taken from the point of view of a younger brother. During the night, the ecclesiastical interior would animate the young boy's fantasies. During the day, with nothing to do in the building, the young boy would take up daily chores like cleaning the floors. On Sunday services, the body would continue to lie in front of the altar and the family would try to position it under the reading of the gospel for maximum effect.

In the story, residence at the church ends prematurely. Since no development occurred in the sick girl's health, the priest urged the family to return to their home before the completion of the 40 days. If the sick person actually lost the battle and died in the church, the holy area would be spoiled. It was to the priest's best interest, therefore, to have the diseased die in their own home. This sounds like some modern hospital trying to maintain its mortality statistics by suggesting hospice care. We also detect some slight irony in Vizyenos treatment of ecclesiastical authority.

Although it dramatizes 19th-century social practices, Vizyenos story sheds some light to older Byzantine customs. Before the ultimate diagnosis of moving into the church, the mother of the sick child takes some intermediary steps of bringing the body to the church via the garments that it touches. She takes garments of the sick girl to church and ties them to the building, a practice testified in Byzantine texts. In the Life of Theophano, for example, Theophano’s father removes a belt that was hanging from a column in the Church of the Theotokos Bassou in Constantinople and ties it around the belly of his wife, Anna, who was having a difficult labor. This gives us license to imagine all kinds of domestic fragments covering the body of the Byzantine church. The male space of churches was typically feminized by fabric rituals that involve dressing and undressing the architecture.

Vizyenos story holds one additional point of interest. The town of Vize contains Byzantine architecture of consequence, most notably the Hagia Sophia. This is clearly not the church of Annio's hospice, since it had been already converted into a mosque. Incidentally, Hagia Sophia has been the subject of recent architectural study by Franz Alto Bauer (Basel) and Holger Klein (Columbia), see here. Unfortunately, the project became too complex for Bauer and Klein to maintain long-term. On a literary note, Vizyenos' short stories exploit two Byzantine narrative modes, antithesis and ekphrasis. For this analysis, see Margaret Alexiou, “Writing against Silence: Antithesis and Ekphrasis in the Prose Fiction of Georgios Vizyenos,” Dumbarton Oaks Papers 47 (1993) pp. 263-286

Vizyenos short story is available in English, see My Mother's Sins and Other Stories by Georgios Vizyenos, trans. William F. Wyatt (Hanover, 1988). For the original Greek version, see Γ. Μ. Βιζυηνός, Νεολληνικά Διηγήματα, ed. P. Mellas (Athens, 1980). I quote the animated and uncanny experiences in the church from the childhood memories of the sick girl's brother.