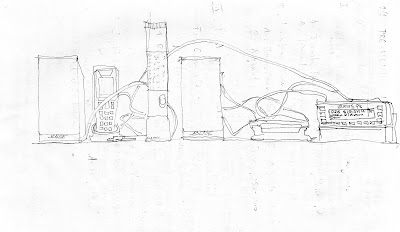 This is what the skyline of our kitchen bookcase looks like. It has been recently populated by my new Sirius satellite radio and all its messy appendages (antenna, plug, wires). Thanks to Santa for a new subscription to Sirius radio, which I had given up when we stopped the long-distance marriage and the commutes from rural places that lacked NPR. Having grown up in the age of radio, I get no satisfaction from internet alternatives like web radio or Pandora. For me the radio DJ's role has been more than a corporate playlist or a statistical formula. As a kid, I used to hide the radio under my pillow and steal some nightly moments of story-telling. When I was growing up, the radio DJ was an arbiter of taste and a transmitter of intelligence. DJ'ing at the college station was a true aspiration. For our Generation X, the small niche of alternative radio defined a self-invented cultural aristocracy whose membership defied class and other contingencies.

One of the skills that made DJ'ing a craft was assembling thematic unity across genres. Making smart and unexpected links runs against today's paradigm of market niches. Although one has to pay for it by monthly subscription, satellite radio still offers antiquated intelligence. Imagine listening to a radio show by Bob Dylan, where he chooses a string of songs based on a theme of choice (like water, or war). Sirius makes such an experience possible every week.

Although I listen to a lot of NPR, BBC, and CBC, most of the time I listen to music. My favorite channel right now is SIRIUS XM U, the indie rock station (it used to be called Underground). This week, for instance, Colin Meloy and John Moen of the Decemberists will take over the station, preview their unreleased new album, and spin their favorite songs. Many of the station's regular hosts are a new breed of blogger DJ like Brooklyn Vegan and Gorilla vs. Bear. Another station that I regularly listen to is First Wave for the sheer nostalgia of classic 80s New Wave. I also like Underground Garage produced and hosted by Little Steven (of Bruce Springsteen's E Street Band and the Sopranos). The station features some famous personalities like Kid Leo (a legend in the Cleveland music scene), Handsome Dick Manitoba (lead singer of classic 70s NYC punk band The Dictators), and Ko Melina (current garage scene in Detroit).

I'm also a huge fan of Classic Radio, a station that replays radio drama from the 40s and 50s. Where else can one listen to series like The Shadow, Dragnet, Philco Radio Time, or Lux Radio. And a day does not pass when I don't also tune into the channel devoted to Forties Swing. You might have guessed, my tastes are rather scattered (or eclectic if you want to spin them positively).
Posted by KOSTIS KOURELIS at 11:13 AM