I keep arguing that Byzantine material culture continues to be relevant in contemporary aesthetics. It only takes a bit of scratching to find Byzantium lurking in the vestiges of subculture. I'm intrigued, for instance, by how many members of the New Wave and Punk scene collect Byzantine art. Last week, I blogged on Rock in Athens '85, one of the most important early festivals for New Wave. Culture Club was the keynote performer and I urged readers to listen to Boy George's comments during that hot July performance. 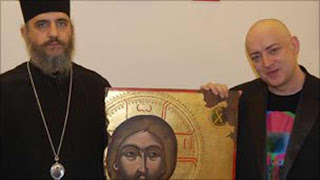 I believe that Rock in Athens '85 generated Boy George's interest in Greek culture because the same year, he bought an 18th-century Byzantine icon from a gallery in London. Last week, Boy George returned the icon to Cyprus after learning that it had been illegally looted in 1974. The icon was made at the Herakleidos Monastery near Nicosia. For the full story see, Patrick Dewhurst, "Singer Boy George Returns Icon that He's Had for 26 Years," Cyprus Mail (Jan. 20, 2011).

The process of identification is a priceless tale of ecclesiastical postmodernism and a rare instance of television archaeology. Bishop Porfyrios of Neapolis, pictured with Boy George above, is the representative of the Cypriot Church at the EU in Brussels. Porfyrios, who is presumably a fan, was watching an interview of Boy George on Dutch TV, when he identified the icon hanging in the waning rock star's living room. "On left side of fireplace at his house during the interview we located in Boy George’s living room an icon of the Jesus Christ Pantokrator," said Porfyrios. "Afterwards we researched the story with expert accounts, and we found it stems from Cyprus, specifically from the church of St Charalambous in the occupied village of New Chorio Kithrea."

In summary, a British artists is invited by the socialist Ministry of Culture to perform at radical rock festival in Greece. When he returns to London, he buys an icon from an irresponsible gallery. He hangs icon in his living room in Hampstead. Twenty-six years later, the artist gives interview on Dutch TV. A Cypriot diplomat-bishop in Brussels catches the icon on his TV screen and recognizes it. Bishop researches icon's provenance and determines that it was stolen. Artist returns the icon to Orthodox church nearest his town. Even more surreal than the photo above is the photo released by the London Daily News during the ceremony of the icon's return, see here.

For those of you that don't know Boy George, he had a bit of a problem with the law in 2009 and served a 15-month prison sentence, see here for biography. No mention is made of Boy George's lifestyle in any of the official interactions with the Orthodox church.
Posted by KOSTIS KOURELIS at 4:57 PM

Poor Boy George - can't catch a break. It sounds as if he was a good sport, though.