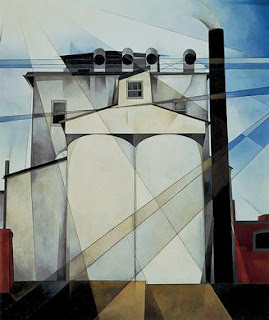 This semester, I'm teaching a 300-level seminar on 1930s America. In the last few years, I've been doing a lot of 1930s architectural historiography and I have realized the pivotal role this decade played in American culture. I've also began to appreciate what a tremendous impact Pennsylvania architects, artists, and intellectuals have made on the 30s. The seminar has seven students, most of whom I have taught before. They are all super smart and I look forward to work with them. I feel committed to the organic idea of seminars, where readings and research can change according to the direction that the conversation takes. I also feel committed to primary research on the physical fabric of Lancaster (like the Eshelman & Sons grain elevators that Demuth painted in "My Egypt," left). Although I am sure lots of things will change in action, the basic seminar structure is as follows:

Although America was a pioneer in modernization, it was not until the late 1920s and 1930s that the country forged a unique American Modernism. Despite the hardships of the Great Depression, the Thirties produced the first golden age of American design from soaring skyscrapers and streamlined industrial products to Hollywood’s opulent fantasies and the New Deal’s sober public works. The Thirties were tortured by contradictions and competing visions of the future leading to a complicated decade of “grotesque” cultural expressions. Radicals and traditionalists, communists and capitalists, regionalists and internationalists confronted each other in the public sphere of architecture and urbanism and collectively developed the basics of American design. We will track the turbulent debates and the spectacular projects that emerged between the Great Crash and Pearl Harbor with a slight bias towards Pennsylvania’s contribution in the works of Paul Cret, George Howe, Charles Klauder, Frank Lloyd Wright, Louis Kahn, Wharton Esherick, George Nakashima, Charles Demuth, Charles Sheeler and Horace Pippin.

OBJECTIVES
I. To introduce students the history of architecture and design during the American 1930s. This will be accomplished through readings and lectures and will be tested with two quizzes.
II. To cultivate a critical way of seeing and feeling. This will be practices in the classroom through attentive analysis, reflective writing, and the introduction multiple media like literature, music and film.
III. To train students how to do original research in a workshop setting. This task will be accomplished through one small biographical presentation and through a more serious group project focusing on the arts and architecture of F&M and Lancaster.
IV. The class was conceived in the spirit of collaboration. Judging on the personal interests of the students, this syllabus is subject to change. As the semester progresses, we will concentrate on the ideas that organically develop through our conversation and will pursue them freely.

The seminar is divided into three major units. In Part I, we will focus on the development of the American avant-garde in order to understand the wider experimental setting of the 1930s. We hope to comprehend the introduction of new cultural tropes and their assimilation in the American scene. Part I will be accompanied by two fieldtrips and a quiz.

Part II will focus on the three most important architects, who contributed to the creation of Modernism, Le Corbusier, Mies, and Wright. We will also turn our attention to a distinctly American version of Modernism (or according to some scholars, Traditionalism), Art Deco. Part II will be competed by a quiz.

In Part III, we turn our attention to the architects and artists who shaped the intellectual climate of Pennsylvania. Each student will be assigned one important personage and will complete a book review of their artistic contributions. Specific readings will be assigned by instructor. At this point, we will begin synthesizing the questions raised in Parts I & II and will inquire on their relevance to Pennsylvania. We will also read a primary document from 1932, the catalog of “International Style,” an exhibition at the Museum of Modern Art that ushered modernism into America. The student research reports will be graded on both coherence and thoroughness.

Finally, in Part IV, the entire class will begin a group project (professor Kourelis included). We will turn the city of Lancaster and Franklin & Marshall College into a temporary laboratory. Using resources at Special Collections, we will collectively tackle two major 1930s buildings on campus, Shadek-Fackenthal Library and Keiper Hall. They were both designed by Philadelphia architect William Lee, who made his name through spectacular movie theaters. Louis Kahn worked in his office. Each student will develop one particular angle of research that he/she will present during the last week of class. The final presentation will form the core of a final paper that will be turned in at the beginning of finals.