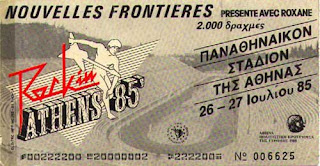 On July 26-27, 1985, the ancient stadium of Athens hosted an interesting happening organized by the newly formed General Secretariat of Youth (Γενική Γραμματεία Νέας Γενιάς) and the French Ministry of Culture. Rock in Athens 85' was a two day New Wave rock festival, which was quite cutting edge for its time. Although major bands like the Rolling Stones had performed in the ancient stadium before (Apr. 17 1967), Rock in Athens was the first rock festival to ever take place in Greece. A New Wave festival at Kalimarmaro in 1985? How radical is that? But it makes little sense considering the lack of a following for New Wave in Greece at this time. A Heavy Metal festival would make sense, rising naturally from Greece's Hard Rock tradition. I can't be certain about my observations, since I wasn't present, but as a committed follower of New Wave, I was struck by the shortage of punks in the summers that I would visit Greece. My cousins, who followed music closely, would confirm these observations. I was a New Wave Greek-American looking for a scene in Greece. Sure, there was the punk band Panx Romana from 1977, singing "You Greeks! you are worms, and the Acropolis doesn't belong to you/Έλληνα είσαι σκουλίκι και η Ακρόπολη δε σου ανοίκει." And there were also anarchists squatting in Athens (less institutionalized and violent as they are today). And there was the store REMEMBER 77, on Adrianou 77 in Plaka (founded 1978), where I bought my first Creepers in 1991.

What makes Rock in Athens 85' peculiar is its sponsors. The festival was conceived by the Greek and French Ministries of Culture. It was a state event televised on national TV and hence totally different from festivals like Woodstock, Live Aid, Coachella, or the extremely successful Rockwave in Athens. Melina Merkouri, then Minister of Culture, was present. Priceless footage shows the grand Merkouri meeting the wild Nina Hagen (and her clean-cut mother) backstage. The General Secretariat of Youth was formed in 1982, soon after Andreas Papandreou's Socialist government won elections and tried to liberalize cultural policy that had been dominated by the conservative right and its family-tradition-religion priorities. Quoting the current website, the Secretariat's task was (and still is) "shaping, monitoring and coordinating the government policy for youth and its connection with society and social entities. In this way, Greece was harmonised with the european and international practice of high-level, self-sustained and integral government services aiming to public youth policies." We must also remember that, only two weeks earlier in the summer of 1985, Live Aid took place in London and Philadelphia. But this was a private venture, organized for famine relief in Ethiopia by Bob Geldof. Live Aid was the first concert to be televised in a global scale through satellite. As the interview with Boy George reveals, Culture Club did have a fan base already in Greece. But it seems that there was not enough of a fan base for each of the bands to appear individually. The festival garnered each group's small fan base into a guaranteed (and cheap) event. We must also consider that Rock in Athens 85' was not exclusively targeted to Greeks. Hoards of vacationing European and American youth attended. After all, Greeks flee Athens for the countryside in July and August.

Whatever the motivations of the concert may have been, it seems to have taken a great risk. As a result it did begin shaping cultural attitudes at least in so far as New Wave's popularity boomed. Nevertheless, the conflict between audience and performers, the awkwardness of the ancient stadium, the July heat are all evident in the videos. The performers included Culture Club, Depeche Mode, Stranglers, Nina Hagen, the Cure, Talk Talk, Telephone and a surprise guest star, the Clash (or at least the remnants of the Clash--Mick Jones and Nicky Headon had already left, and the Clash disbanded in 1986). According to eye-witness accounts, fights broke out between the police and fans outside the stadium. Italian tourists were somehow involved.

If anyone wants to watch the televised festival (ERT2), you can find it almost in its entirety (minus the Clash performance) on Youtube. Extremely interesting are the backstage interviews below. To see the Melina-Nina encounter, go to Part 3. In the spirit of Punk Archaeology, Youtube allows me to investigate an event that took place in the ancient Panathenaic stadium that was reconstructed for the first Olympics of 1896. The footage is source material for an ephemeral moment. The videos not only transport us to a different era of Greek cultural policy, but they offer evidence for an almost surreal confrontation between a primarily Anglo-American (and German) youth movement and a resisting Mediterranean. Just watch the accumulation of sweat on Boy George's face as the night progresses. Although I haven't studied the videos in great length, they also reveal tensions in a cultural dialogue. Note for example homosexual tensions between Boy George and the audience. I hope that the readers of this posting interested in the history of the Greek 1980s will offer closer reading and insights.


For those that want to watch the concert in its entirety, the following links will direct you to individual band performances:

This is amazing! I can't believe there are no comments. Perhaps all your readers are speechless.