Between Boston and New York 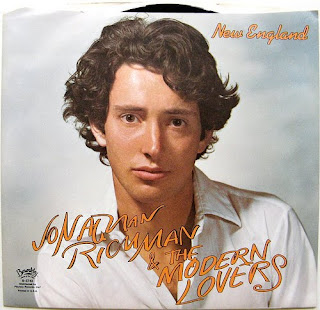 I'm trying to decide whether to go see Jonathan Richman at the First Unitarian Church on March 1. Browsing the web, I came upon this great little article by Keith Gessen, "The Bostonians", in the The Guardian (May 3, 2008). This is perfect reading for Punk Archaeology, thematizing the tension between Boston and New York and the conflicts of leaving the former for the latter. Keith Gessen is great, a founder of n+1. Gessen does a close readings of Richman classics (like Roadrunner), seeing the journey from provincial Boston to Warhol's factory and the Velvet Underground. For Gessen, everyone leaves Boston for New York, but who really wants New York?. Richman: "I don't want just a girl / to fool around with . . . I don't want a cocaine-sniffing triumph / in the bar."

I must confess, I don't know much about Boston's punk history, but I will never forget the night that the Lyres played in West Philadelphia (Human Barbecue, 1987?). Most recently, the token band of South Boston has been the Dropkick Murphys who are fantastic, of course, but a little overused in commercial contexts. They are definitely new generation, more akin to Green Day and packaging.

Michael Patrick MacDonald's Easter Rising (2006) is the punk memoir of Boston. In an interview by MacDonald when the book came out, I remember him saying how "punk saved his life." MacDonald grew up in the projects of the South Boston, his family was ravaged by Irish gang violence. Punk became his salvation. Although I wouldn't be able to write Boston's punk topography, I'm enjoying the occasional snippets. And I'm indebted to friend Paul Di Mattio for his Massachusetts musical insights (Boston v. Western Mass., etc.)
Posted by KOSTIS KOURELIS at 5:25 PM

Sylvia had dinner with Keith Gessen a while back when he came to visit F+M--did you meet him too? I <3 JR and I really want to go, so please get an extra ticket!