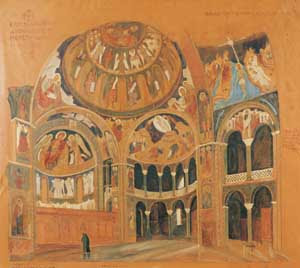 In the last few days, I've been thinking of a permanent blog series that might highlights the irruptions of Byzantine material culture in popular American consciousness. One such moment dates to 1955. Reading through the biography of Greek artist Spyros Vasileiou, I learned that the Detroit Institute of Arts curated an exhibition on Neo-Byzantine art in 1955, which included Vasileiou. The artist was in residence in Detroit, as he also executed the iconographic cycle of Saints Constantine and Helen, a newly completed Greek Orthodox church. For a masterful dramatization of Detroit's Greek-American community during this time, see Jeffrey Eugenides' Middlesex (2002).

Like many exhibits, the 1955 show at the DIA has passed into oblivion. I personally find it amazing that Paul Cret's Beaux Arts museum once housed modern Greek Neo-Byzantine art. These Greeks, moreover, momentarily coexisted with Diego Rivera's controversial Ford murals (1932-33). This is an important juxtaposition considering the impact that Byzantine art had on Rivera during his 1920 trip to Italy. Through serendipity, a Greek Generation of the 30s shared the same roof with the Mexican Generation of the 30s. The roof itself was designed by the founder of the Philadelphia School of Architecture, Paul Cret, who will get a lot of airwaves in my 1930s seminar this semester, as will the tensions of the Rivera court.

I blogged on Spyros Vasileiou last December, when Sotheby's sold his Patesion Street (1930) for $330,000. I started thinking about Vasileiou again because the Benaki Museum will host a retrospective of Vasileiou's set designs in 2011 (see details). It is important to note that Vasileiou started his painting career decorating Saint Dionysios in Kolonaki, a building designed by the patriarch of Byzantine architecture Anastasios Orlandos. His iconography won him the Benaki Prize in 1930. Above, you see one of Vasileiou's drawings from the 1930 competition. For more information on Vasileiou, visit his museum housed in his own home. I don't know much about the Vasileiou estate, but I hope they were not the ones selling Patesion Street in 2009 out of financial hardship.
Posted by KOSTIS KOURELIS at 9:25 PM