As Lancaster's train station decks itself out for Christmas with a large tree, balls and even a little radio that blares holiday music, a set of 12 panels have been hung on the walls. They tell the good old Night Before Christmas story. Like many things in Lancaster, they have a timeless eerie quality that Ben Leech used to record in Old Weird Lancaster. If I knew more about the history of popular prints, this might not be such a mystery, but I'm intrigued by the inability to fix the panels to any art-historical meaning. They have a vernacular feeling to them. They most likely date to the 1970s (or is it the 1930s?) but act out a primitive style appropriate to the 1822 setting. Lancaster Station is terribly unkempt with threatening water damage and deterioration. The panels testify to the building's instability. They, too, are stained and distorted.

I wish I knew more about the particulars of this ephemeral collection of material culture. They represent the activities of the local community to particularize the building and resist the neglect of its owner: Amtrak. Other installations throughout the station testify to this local care (the photographic history of the station, installed by the local historical society, for instance). Whatever their ultimate origin, habit and meaning might be, I felt compelled to document the whole series and through them celebrate the weirdness that is Christmas in America. The panels are presented clockwise, starting from the NE. Six of them hang on the E wall and six hand on the W wall. I transcribe the text below each panel. 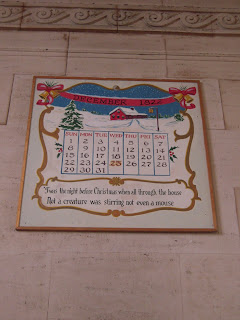 T'was the night before Christmas and all through the house, Not a creature was stirring, not even a mouse. 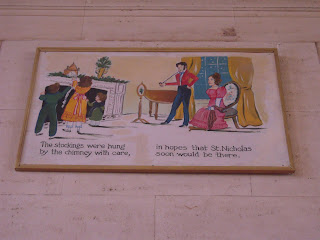 The stockings were hung by the chimney with care, in hopes that Saint Nicholas soon would be there. 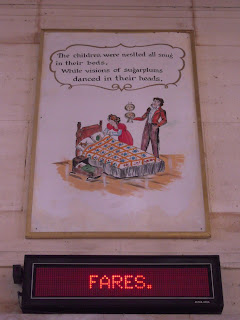 The children were nestled all snug in their beds. While visions of sugarplums danced in their heads. 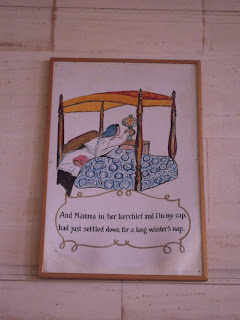 And Mamma in her kerchief and I in my cap. Had just settled down for a long winter's nap. 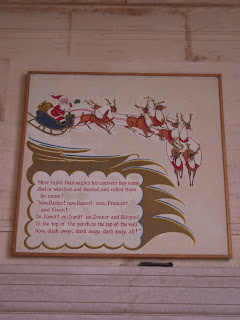 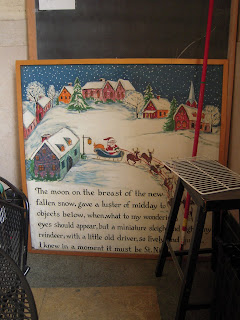 The moon on the breast of the new-fallen snow, gave a luster of midday to objects below, when, what to my wondering eyes should appear, but a miniature sleigh and a tiny reindeer; with a little old driver, so lively and quick I knew in a moment it must be St. Nick. 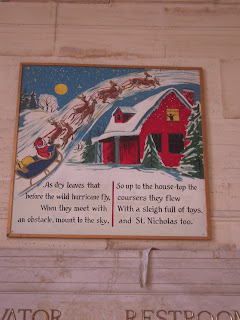 As dry leaves that before the wild hurricane fly,When they meet with an obstacle, mount to the sky, So up to the house-top the courses they flew With a sleigh full of toys, and St. Nicholas too. 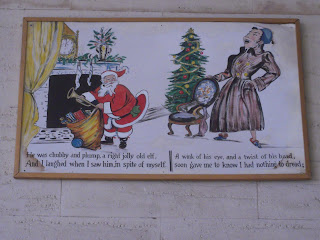 He was chubby and plump, a right jolly old elf. And I laughed when I saw him, in spite of myself. A wink of his eye, and a twist of his head, soon gave me to know I had nothing to dread. 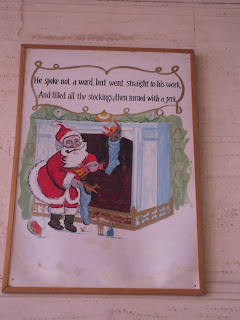 He spoke not a word, but went straight to his work. And filled all the stockings; then turned with a jerk 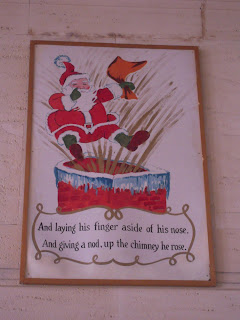 And laying his finger aside of his nose. And giving a nod, up the chimney he rose. 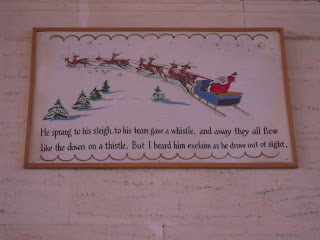 He sprang to his sleigh, to his team gave a whistle, and away they all flew like the down of a thistle. But I heard him exclaim 'ere he drove out of sight, 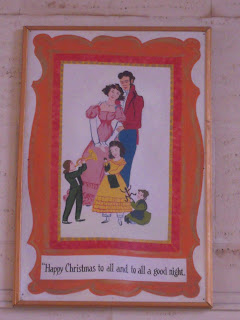 "Happy Christmas to all and to all a good night!"

A Visit from Saint Nicholas, by Clement Clark Moore (1823)
Posted by KOSTIS KOURELIS at 3:55 PM

This is fascinating. Some of the images [3s 5, 6, 7, 8] I remember from the NbC book I had as a child, with tabs you could pull and Santa would go up & down the chimney, or the reindeer would move back and forth. That was in the late 40s. But some of the pictures seem unfamiliar.

Ouch-- the sting of the past tense. If you are trying to shame me out of hibernation, you might just succeed.

I've never seen these at the train station in my past five years of travel. I suspect that -- given the water stains -- they found them during renovations or something. Missing this year are the hand-cut paper snowflakes in the front window of the station. They would get lights around them during the winter, but would remain up all year round. Deep into the depths of August while the station was sweltering, these remarkably persistent snowflakes hung in the window. I used to think of them as permanent ephemera.....

wow! They *are* hard to date. I'd guess pre-1960, though. The particularity of the date on the calendar in the first image (appropriate to the poem, but who would know that these days, or care?), and then the fashions, which are also accurate to the 1820s... it says "colonial revival" to me. But that crazy orange frame in the last one says "1950s, baby." And the typeface doesn't speak to me one way or another.