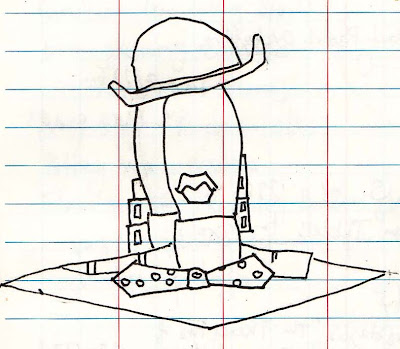 In addition to the projected triple shadows, Fred Astaire's Bojangles dance in Swing Time (1935) has psychoanalytical potential from the point of view of shoes. I feel that this must be mentioned, in order to clarify Kevin Brady's recommended readings from Zizek, quoted below. The dance routine begins with a gigantic personification of Bojangles through the bottom of Astaire's shows. Above, we see the stage sets for the soles, the bow-tie, the collar, the hat, and the racially exaggerated lips. In the background, a model of Harlem can also be seen. As the dance progresses, Astaire spreads his gigantic legs to reveal his striped pants that lead to his crotch. The dancers spread his legs open, and the viewer realizes that they are superhuman props.

I've followed up some of the racial tensions of Astaire's Bojangles to encounter a critical impasse. Some critics find Astaire's blackface intolerable, while others see in this performance an honest commemoration. Astaire's "Bojangles of Harlem" is here paying direct tribute to a historical figure, Bill "Bojangles" Robinson (1878-1949), one of the most popular African-American dance performers. At one level, therefore, we must acknowledge that Astaire is paying direct tribute rather than stereotyping. He acknowledges Bill Robinson's contributions to dance innovations. Hence, in the racially offensive scale, Astaire is somewhere in the grayer zone.

Going back to shoes, I quote the Zizek passages that Kevin Brady sent me, along with a most recent conversation:

Hi Kostis,
I re-read your new blog post about Astaire and Bojangles. Something that strikes me about the illustrations you provide (- besides the odd (bizarre? anamorphic?) - in any event, a floor-up perspective in which all lines converge on crotch (genitals and anus): from that viewpoint, we're as far as possible from the humanizing (& subjectivizing) features of the face, and the heads-up, feet-down "architecture" of the human figure is subverted (recalling here surrealist photography of toes and upside-down faces - Man Ray 1920s?). The identification of the movie screen itself with the dance floor - the mediating surface between the audience and film worlds - is interesting - horizontal is vertical, as if to say, this is one kooky, topsy-turvy world!
Kevin Brady, December 6, 2010 10:06 AM

"Andersen's fairy tale The Red Shoes, an impoverished young woman puts on a pair of magical shoes and almost dies when her feet won't stop dancing. She is only saved when an executioner cuts off her feet with his axe. Her still-shod feet dance on, whereas she is given wooden feet and finds peace in religion. These shoes stand for drive at its purest: an 'undead' partial object that functions as a kind of impersonal willing: 'it wants', it persists in its repetitive movement (of dancing), it follows its path and exacts its satisfaction at any price, irrespective of the subject's well-being. This drive is that which is 'in the subject more than herself': although the subject cannot ever 'subjectivize' it, assume it as 'her own' by way of saying 'It is I who want to do this!' it nonetheless operates in her very kernel." From “Love Beyond Law” by Slavoj Zizek, a paper was first published in the Journal for the Psychoanalysis of Culture and Society 1 (1996), 160-61, as a review of Bruce Fink's The Lacanian Subject: Between Language and Jouissance (Princeton: Princeton University Press, 1995).

"The fascinating thing about partial objects, in the sense of organs without bodies, is that they embody what Freud called “death drive”. Here, we have to be very careful. Death drive is not kind of a Buddhist striving for annihilation. I want to find eternal peace. I want… No. Death drive is almost the opposite. Death drive is the dimension of what in the Stephen King-like horror fiction is called the dimension of the undead, of living dead, of something which remains alive even after it is dead. And it’s, in a way, immortal in its deadness itself. It goes on, insists. You can not destroy it. The more you cut it, the more it insists, it goes on. This dimension, of a kind of diabolical undeadness, is what partial objects are about. The nicest example here for me, I think, is Michael Powell’s Red Shoes, about a ballerina. Her passion for dancing is materialised in her shoes taking over. The shoes are literally the undead object." From Slavoj Zizek, The Pervert’s Guide to the Cinema.
Posted by KOSTIS KOURELIS at 10:08 PM

fascinating stuff, guys. I feel the urge to re-watch "Pervert's Guide." This is helping me better understand what I'd always felt was the unsettling uncanniness of this scene. I think there is a lot to be said here about the body, the screen, the "projected self," and how they relate to racialized representation. Something to chew on, for sure! keep it comin'.