Every once in a while, I read the subject heading of this blog, and I remind myself of my commitment to Mediterranean archaeology. Reading my posts during the last few months, Greece has completed receded behind concerns over swing, letterforms, and American history. So, last weekend, I asked myself, "how about 1930s Greek fonts"? And I had a few minutes at Van Pelt Library for a first search, where I discovered the work of Yannis Kephallenos (1894-1957).

Kephallenos was born in Alexandria (and knew Cavafy). He studied art history in Paris, where he met other Greek luminaries like Kostas Varnalis. In 1931 Kephallenos became professor of printmaking at the School of Fine Arts in Athens, where he taught a number of influential artists. One can read more about Kephallenos' life here. My introduction to the artist's letterforms is Emmanuel Ch. Kasdaglis, "The Theocritus of Yannis Kephallenos: A New Type-Cutting," in Greek Letters from Tablets to Pixels (New Castle, 1996), 163-73, from which I sketched the two letterforms shown here (figs. 17, 6)

The letterform above comes from the Citation of the Union of Greek Banks (1938). It exhibits similar dramatic strategies (fattening-thining of elements) as the English 1930s fonts that I've been writing about. Here Kephallenos has gone back to Byzantine letterforms for inspiration, specifically to the 6th-century Purple Codex. Thirty-three sheets ended up at the Monastery of St John is Patmos, where Kephallenos may have seen them. A couple of sheets are currently displayed at the Byzantine Museums of Athens and Thessaloniki. Kephallenos' appropriation of the Byzantine tradition for a modernist calling fits well arguments about Byzantium and modernity that I've made in different contexts.

Earlier in his career, Kephallenos also illustrated Kostas Varnalis' Besieged Slaves (1927). In this book-cover, Kephallenos takes an interesting strategy of angularizing the letters by tightness and overlap. 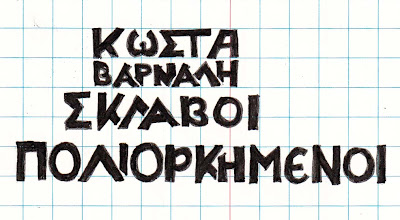 Finally, an interesting exhibit on Kephallenos' art was up in Thessaloniki last summer, showing his contribution to the design of Greek schoolbooks, see here: "Ο Γιάννης Κεφαλληνός και οι μαθητές του στα αναγνωστικά," at MIET, the Cultural Institute of the National Bank (Μορφοτικό Ίδρυμα Εθνικής Τραπέζης).
Posted by KOSTIS KOURELIS at 10:52 AM