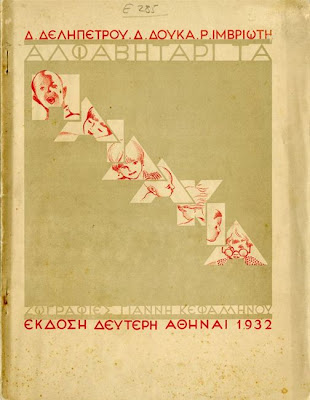 Yannis Kephallenos illustrated a children's alphabet book in 1932 that was on display at the MIETS exhibition in Athens and Thessaloniki. The exhibit also featured a mock-up below. 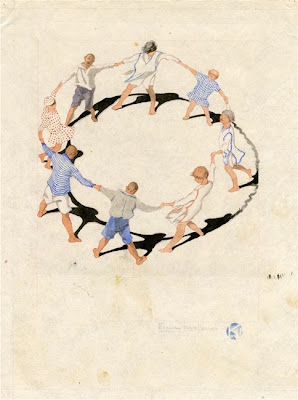 I'm not sure whether graphic design has been critically studied for Greece beyond a few monographs. The culture of letters is fairly intense in Greece, with people caring deeply about letterforms and the history or printing the Greek word. After all, it's countries where linguistics is deeply entangled with politics that you find a sophisticated literary culture among the general population. But graphic design is a little bit different; it requires visual literacy. And I've always felt that Greece has been in the literary avant-garde (Cavafy, Seferis, Elytis) but in the visual backwaters. The situation is exactly the opposite in Spain and Italy, where the visual avant-garde overshadowed the literary avant-garde. Whatever the case may be, Greece's visual modernism is for the most part derivative. That does not mean that Greece's modernism is any less interesting. Since the 1990s, art historians have convincingly elevated the provincial avant-gardes (not French, German, Soviet or Dutch) into the canon. Czech and (to a lesser extent Balkan) avant-gardes make a good case.

Yannis Kephallenos is definitely a landmark in the history of Greek graphic design both as a producer and as a teacher. I'm not certain that he can stand up to the masters of letterforms from Europe and the U.S., from whom he learned. Kephallenos' letterforms for the textbook by Delipetros, Doukas and Imvrioti illustrates an streamlined elegance married with the concerns of "Ellinikotita" evident in the archaizing fonts of the 1930s. At a superficial level, Greek archaizing fonts carry connotations of dictatorships. Cultural trends and artistic strategies developed by the Metaxas regime (1936-40) were picked up again by the junta (1968-74). Italian modernism bears a similar burden to the extent that the 1930s are inseparable from Mussolini. Whereas private enterprise and the marketing of desire were motivating factors in the development of graphic sophistication in the U.S., the venues of graphic expression available in Greece had a limited marketing potential. Directly or indirectly, the state was central as was the concern over the state's fate.

Nevertheless, Kephallenos' design is vital. His diagonal letters CHILDREN overlap in the same way that his BESIEGED SLAVES did back five years earlier. I thank John Stathatos for also seeing an unresolved crampedness in the latter. CHILDREN is better resolved, although difficult to read. The tension between the geometrical and the figurative show the influence of Bauhaus sensibilities on the one hand and social realism on the other. Like the case with American graphic design of the 1930s, Greek tastes are caught in a battle between rarefied elitist modernism and popular social realism. The "grotesque" result (as it has been referred to by American cultural historians) is more interesting than its pure manifestations.
Posted by KOSTIS KOURELIS at 1:34 PM