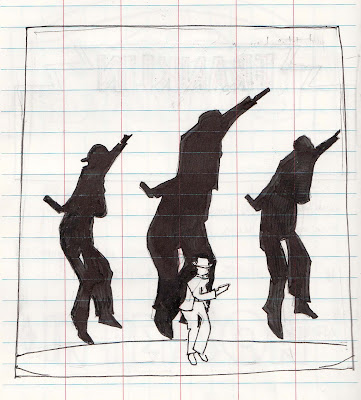 I thank Johanna for commenting on the Top Hat font and sending me to Fred Astaire's Bojangles in Harlem in Swing Time (RKO Pictures, 1936). The scene is aesthetically rich, if the viewer manages to pass over the highly offensive blackface. At the end of the scene, Astaire dances behind a triple projection of his own silhouette (sketched left). I send readers to my earlier thoughts on 1930s silhouettes here, elicited by the portraits that Georg von Peschke drew while excavating in Corinth. Incidentally, I got a chance to see all 20 of the Peshcke silhouettes in Athens this summer, but I must leave them for a future posting. Astaire's silhouettes elucidate the popular 1930s font, which pitch a thick line against a thin line in each letter. High contrast, thick-and-thin, large-and-small are in some ways the product of illuminated projection and the electricity of film and signage. I will show in a future posting that neon lights contributed to the development of fonts in the 1930s. Neon lighting has a three dimensional quality. The solid letter in the background is illuminated by a neon tube in the foreground that replicates the letter in form a few inches in front of the letter. The neon light does not occupy the same plane as the letter which it illuminates because physical contact would burn the letter from the tube's heat. A physical gap between neon and letter backdrop introduces perspectival variation as the viewer moves around the sign. Perspectival variation is what distinguishes Astaire's three shadows, since they are generated by three lights positioned around a circular platform to the right, center, and left of the real Astaire.

Like the black shadow of Fred Astaire, typography and neon tubes engaged the viewer in a game of projection. The high-contrast of shadows cultivated a minimalist aesthetic on a fertile black-and-white screen. But the dialectic of dancer vs. shadows supersedes simple mechanical replication the moment that Astaire's shadows disengage from Astaire and take on a life of their own. Astaire stops and observes his triple body move without his volition behind him. He stops being the generator of motion, or the object of projection, and he turns into a subject. He watches himself, as we watch him. His triples become his dance partners. 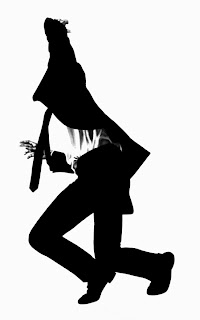 Astaire's black silhouettes are also interesting in light of Robert Longo's 1979 "Men in the Cities" series. Longo's involvement with the post-punk New York scene makes "Men in the Cities" the most iconic artistic expression of 1980s New Wave. It was one of the first images in Sympathy for the Devil: Art and Rock and Roll since 1967, a groundbreaking exhibit at the Museum of Contemporary Art in Chicago in 2008. Fortunately for me, the Archaeological Institute of America's annual meetings in 2008 were in Chicago and I got a chance to see the show; see catalog, here. As with the staging of Astaire's dance, Longo's dancers were displayed as a triptych (see photo of Dominic Molon, curator, in front of Longo's series here).

Whether intentional or not, I love the visual affinity solicited by Astaire's iconic dance. After all, punk archaeology begins in the 1930s, as Lewis Erenberg has convinced me in "The Crowd Goes Wild: The Youth Culture of Swing," Swinging the Dream: Big Band Jazz and the Rebirth of American Culture (Chicago, 1998), 35-64.

Ultimately, both Astaire and Longo are the descendants of that famous Nude that Descended the Staircase in 1913 at the Armory Show. Unlike the male-gazing Duchamp, the American artist of the 1930s and 1980s is interested in a dressed male body, a suited figure that does not descend but ascends.
Posted by KOSTIS KOURELIS at 8:44 PM