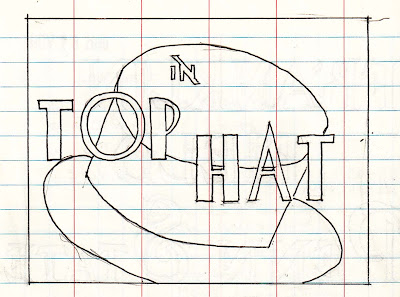 Previewing Top Hat (RKO Pictures, 1935) on my way home, I noticed that the opening credits use the same font as noted on yesterday's posting. This Fred Astaire/Ginger Rogers film is a candidate for a lecture on Art Deco in Hollywood. The sets include a stylized classical hotel and a Venetian fantasy. The Gay Divorcee (RKO Pictures, 1934) is another possibility. The dynamics of the fonts in Top Hat are complemented by the sudden movement of the camera (as soon as the credits are finished) that reveals an actual person wearing the hat above. The next calligraphic delicacy is a zoom into a sign hanging on a wall: "SILENCE must be observed in the Club Room." The fonts here are traditional and Gothic and set a foil to Fred Astaire's uncontrollable desire to break the silence through dance.

Being a bit silly on my late train ride, I considered how my name would look like if I was an RKO actor in the 30s and a protagonist in Top Hat. Not very attractive:

Posted by KOSTIS KOURELIS at 8:51 AM

Not sure if it relates to Art Deco, but if you're into Astaire/Rogers, check out the "Bojangles of Harlem" scene from "Swing Time" (1936)--Astaire is in blackface, its amazing.

I never thought about fonts in the context of culture. Thanks for making me think more divergently. I wonder what fonts can tell us about the temper of our time. Has anybody ever done any research on lexiography in history? Is lexiography the right word or did I just invent it?

Very nice, thanks for the information.

I really liked this part of the article. with a nice and interesting topics have helped a lot of people who do not challenge things people should know.. you need more publicize this so many people who know about it are rare for people to know this... success for you..... .!