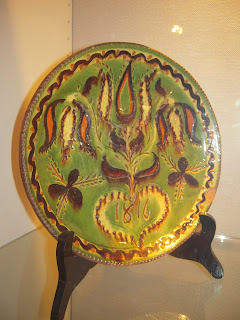 During my interview at Franklin and Marshall College, I showed material from my excavations of an Arab/Norman house in western Sicily, including an almost complete Green-and-Brown plate. Having spent a few minutes in F&M's Phillips Museum before my research talk, I came across this Pennsylvania Dutch plate from 1816 (left), which I photographed and inserted into my presentation as a distant cousin to medieval Mediterranean ceramics. Early American pottery belongs to medieval ceramic traditions, indirectly influenced by the pottery of Islam and Byzantium. Clearly, I was stretching myself to make my research relevant further closer to home.

Now that I am actually teaching a class on Islamic Art and Architecture at F&M, I had a chance to research the local traditions and substantiate my claims. I am also thrilled to see that I was right and my intuition was not too far off. The medieval Mediterranean ABSOLUTELY influenced Pennsylvania Dutch ceramics. The plate at the Phillips belongs to a type known as Tulip Ware. An article from New England Magazine (March, 1895) explains this fascinating transmission of Islamic notions in the New World.

"This was a favorite flower with the old German-Americans, not only on account of its beauty and characteristic form, and the ease with which its simple outline could be represented in slip-painting, but because of the associations surrounding it. The tulip, a native of the shore of the Mediterranean, in the Levant, or the region to the east of Italy, extending into Turkey and Persia, is said to have been brought from Constantinople to Augsburg by Konrad von Gesner, a noted botanist and zoologist of Switzerland, in the year 1559, where it soon came into a popular favor. In the 17th century the cultivation of this plant developed in Holland to such an extent that it became one of the most remarkable horticultural manias in the world's history, and fabulous prices were frequently paid for the new and rare varieties. The Tulpenwuth, or 'tulip madness,' extended into Germany and continued to rage for many years. The German potters of the 18th century, particularly throughout the Rhenish Palatinate, used the tulip extensively as decorative subject on their slip-ornamented earthenware ... It is remarkable that the Persian name of the tulip, dulband, should have retained through nearly three and a half centuries, and that the plant should be known to the Pennsylvania Germans to-day as the Dullaban."