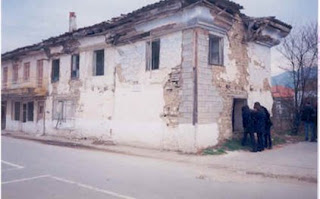 Houses are a difficult building type to preserve. They are typically not unique, not monumental, and victim of continuous alteration, repair, and changing ownership. Houses gain notoriety when someone of importance lived in them. Think of all the "George Washington slept here" houses in the U.S. This is the case with three houses in Greece that have received the recent attention of preservationists, the houses of Paulos Melas, Menelaos Lountemis, and Demetris Ronteris.

Balkan War hero Paulos Melas lived at Tatoi 50, Kephissia, during the last few years of his life till 1904. As an abandoned structure, the house has received gratuitous vandalism by all kinds of people emotionally invested with Melas from militant right-wingers to militant left-wingers. The house is currently owned by Melas' grand-daughter. On Sept. 16, the Council of Newer Monuments placed it in the national registry. The Ministry of Public Works also began its restoration. The structure is a small suburban one-story house built in 1895. See report by Giota Sykka, "Σχέδιο σωτηρίας της οικίας Παύλου Μελά," Kathimerini (Nov. 11, 2009).

Greek author Menelaos Lountemis was born in Asia Minor but spent his teenage years (1923-1932) in Exaplatanos, Pella. His house (top) was declared a national monument in 1985 and Melina Merkouri guaranteed the funds for its restoration. Nothing happened in the last 24 years and last February Lountemis' daugther initiated a call to action through Facebook to save the house from collapse. Over 1,000 Facebook supporters seem to have pressured the government into action. Last week, the deputy minister of Interior announced plans to restore the house. For a full report, see, "Αποκατάσταση της οικίας του Μενέλαου Λουντέμη," Kathimerini (Nov. 12, 2009).

The third house to be saved this Fall is the house of theater director Demetris Ronteris in Glyfada. I haven't been able to find further details about this project. I don't know much about Ronteris. He studied (among other things) art history in Austria and became a student of Max Reinhardt in Berlin. In 1932, he returned to Greece and directed in the National Royal Theater. His house in Glyfada hosted a saloon of luminaries, including Elia Kazan and John Steinbeck. Ronteris died in 1982 and his house has been under threat since then. In 2007, it almost went into auction.
Posted by KOSTIS KOURELIS at 10:38 PM