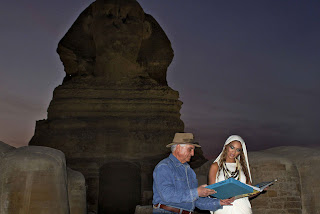 In a recent biographical article on Zahi Hawass, we learn that the most powerful man in Egyptian archaeology attended a Grateful Dead concert at the pyramids during the mid-1970s, see Ian Parker, "The Pharaoh," The New Yorker (Nov. 16, 2009), p. 52ff. A couple of months ago, I posted on the Pink Floyd concert in Pompeii (1971), pondering the connections between rock and archaeology. Parker's reference to Hawass' pyramids concert attendance made a nice match to the photo on the left, from a few days ago, when Hawass guided Beyonce at Giza. Beyonce's "I Am..." tour has raised some controversy in the Islamic world, see Art Daily (Nov. 10, 2009). Although I used this news story as a conversation piece in my Islamic class, I will make no comments on the irony of this picture (the Egyptian cowboy archaeologist and the scarfed sex idol). Hawass spent a few years in Philadelphia as a grad student at Penn. His appreciation of American pop culture is not surprising, nor are his own super-star ambitions.

I will simply take a moment to remember the Grateful Dead concert, which took place in September 1978. The performance at the Giza Light and Sound theater was followed by three shows in Cairo. Interestingly enough, highlights of this Egyptian tour were released a year ago, see David Fricke, "The Dead Rock the Pyramids," Rolling Stone (Oct. 16, 2008). The CD title, "Rocking the Cradle/Egypt 1978," presumably refers to Egypt as the cradle of civilization. I am not a fan of the Grateful Dead, but I appreciate the inclusion of oud player Hamza El Din in their line up. El Din had appeared in the 1964 Newport Folk Festival, and in the 1980s/90s he taught ethnomusicology in various American universities. The 1978 Grateful Dead concert must be added to the saga of rock archaeology.
Posted by KOSTIS KOURELIS at 8:16 PM

Speaking of curious historical - pop intersections, keep an eye out for the upcoming Grateful Dead exhibition at the New-York Historical Society!