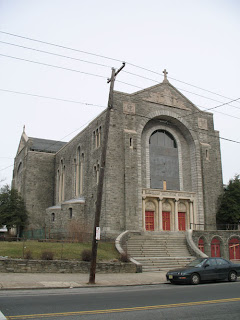 The wrecking ball has met the Church of the Transfiguration, on 56th and Cedar Sts. in West Philadelphia. Built in 1905, the church has been vacant for almost a decade. See the Philadelphia Church Project blog (here) for the sad images of demolition. The interior furnishings of the church were stripped last month and can be found at Provenance, the architectural salvage store on 1610 Fairmount Ave. This Catholic church, convent, school and complex was sold by the Archdiocese of Philadelphia to Boy's Latin, a charter school that opened in 2007. The school is an interesting, albeit controversial, experiment, see St. John Bard-Smith, "Latin Lovers," Philadelphia Weekly (June 11, 2008). The school will presumably expand in the plot that housed the Transfiguration.

Many thanks to the Necessity of Ruins for recording the processes of Philadelphia's own ruination. I was also deeply saddened to see the wrecking ball meet another West Philadelphia monument, the Drexel Shaft on 30th Street. The demolition took place on Sunday (Nov. 16); for more information, see, Eulogy for a Shaft and Drexel Shaft Implosion (Necessity of Ruins, Nov. 12 & 16). The smoke stack was designed for the 30th Street Station Steam Heating Plane by the office of Graham, Anderson, Probst & White in 1929. This Chicago firm was the successor of Daniel Burnham's office and their ambitious urbanism is legendary. Their plans for Philadelphia's 30th Street resembled the Terminal Tower project in Cleveland. Unexpectedly, the Great Depression kept the full urban scheme from materializing. The smoke stack was an orphan, a monument to a lost moment. The boiler was last used in 1964 and, I agree with The Necessity of Ruins, it was an icon of West Philadelphia. Crossing the Schuylkill River or entering the city by train was always marked by this vertical monument rising over its cubic base.
Posted by KOSTIS KOURELIS at 6:01 PM

All the members of the parish that gave their sweat and money in exchange for salvation to build the church... all wound up in the landfill.