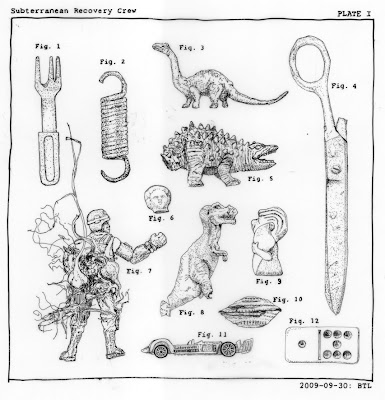 Ben Leech, has outdone his own artistic discipline with "Subterranean Recovery Crew" posted on Old Weird Lancaster (Nov. 17, 2009) and shown above. Since this summer, Ben has been choosing a building in Lancaster, Pa. and drawing it. The series is called "Building of the Week" and is a regular feature of the Lancaster Building Conservancy blog. In addition to the drawing, each building is thoroughly researched and photographed. So far, the series includes Strawberry Hill Grocery, Groff Funeral Home (one of my favorites), Kepper's Confectionary Building, 302-306 West Vine Street, Fleet Wing, Ashley and Bailey Silk Mill, and the Mayer Farmstead. For those who do not know of Ben, he is a practicing Historic Preservationist that came to Lancaster from Chicago only a few years ago. He is best known in the Lancaster community for two blogs, The Lancaster Building Conservancy and Old Weird Lancaster.

When Ben published the drawing above he entered a new realm: archaeology and archaeological poetics. "Subterranean Recovery Crew" contains 12 drawings of objects that Ben found in his back yard while gardening. The piece takes its name from the hotwheel in fig. 11 that reads "Subterranean Recovery Crew." The drawing was posted just as Ben was storing his garden tools at the end of a productive Fall. I love this drawing, it's loaded with associations. First, it is technically immaculate. It uses all the 19th-century conventions of archaeological illustration (orthographic representation, line-weights, stippling). The style itself hence introduces an element of nostalgia, a common trope in archaeological representation, but the irony here is that the artifacts come from the capitalist present. Discarded in Ben's backyard by the previous occupants, even the "present" of our lives has aged and deteriorated. For instance, G.I. Joe has onions growing out of him (after all, even our current war in Iraq is 6 years old). Although brought together by the chance of archaeological discovery, the 12 objects have a provocative narrative quality. They come out of a dream, a Surrealist assemblage, or a Situationist drift. I honestly, cannot stop from looking at the illustration. Every time, I think I've seen it enough, I click on it again and come up with additional poetic scenarios. I thank Ben for letting me reproduce his drawing here.

At the same time, Ben's drawing is more than poetry, it evokes the scientific discipline of Garbology, created in 1973 by William Rathje at the University of Arizona. Rubbish: The Archaeology of Garbage (1992) by Williams Rathje and Cullen Murphy is one of the most important American archaeological publications (in my opinion). Excavating our own everyday lives has been beautifully explored in the collection of essay Archaeologies of the Recent Past, ed. Victor Buchli and Gavin Lucas (2001). I am particularly susceptible to Ben's drawing because I have been thinking about urban archaeology in Lancaster more broadly. The most recent noteworthy excavation at Lancaster was at the Stevens and Smith House, where a station in the underground railroad was discovered. The project was directed by James A. Delle (Kutztown University) and Mary Ann Levine (Franklin & Marshall College). I would love to see a more permanent F&M excavation at Lancaster and I'm exploring some possibilities.
Posted by KOSTIS KOURELIS at 8:22 PM