Philadelphia Greeks and their Black Priest 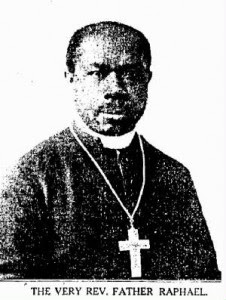 While researching the architectural history of Greek American churches in Philadelphia, I came upon Raphael Morgan, a fascinating individual. Reverend Morgan became the first African American Orthodox priest. He was born in Jamaica in the 1860s or 1870s, was ordained in the Episcopal Church in 1895, converted to Orthodoxy in 1907 and was ordained. I will not recount Morgan's life story here, but simply refer you to his Wikipedia biography and a lecture by Matthew Namee (also available on podcast).

What is amazing to me is that Fr. Raphael was an integral part of the Greek community between 1907 and 1916. His religious sponsor for ordination was Fr. Demetrios Petrides, whom I mentioned in yesterday's posting on the Greek churches of Lancaster. Fr. Raphael's home was the Church of the Annunciation, the first Greek-Orthodox parish in Philadelphia. Originally an Episcopalian church (All Saints), the building was bought by the Greeks in 1908 and was converted into the Annunciation. It was torn down in the 1960s, after the congregation migrated outwardly to the suburbs of Upper Darby and Elkins Park. The current Orthodox Cathedral in Philadelphia, Saint George, was established five years after Fr. Raphael's last known reference. Saint George moved into a premiere Episcopalian church, Saint Andrews (designed by John Haviland in 1822). The building still serves the community, see “From Greek Revival to Greek America: Archaeology and Transformation in Saint George Orthodox Cathedral of Philadelphia,” New Griffon 10 (2008), pp. 28-36.

The Greek American community of Philadelphia felt so close to this African American priest, that it sought him as assistant pastor if he failed to establish a black Orthodox parish. In the 1970s, historian Paul Manolis conducted oral history interviews and recorded stories from the Greeks of the Annunciation who fondly remembered Fr. Raphael as children. Fr. Raphael was married, divorced, became a monk and may have founded a monastic order of black Orthodox Christians. Along with a group of Jamaicans in Philadelphia, he published a letter complaining about black nationalist Marcus Garvey. Historians lose his whereabouts in 1916. One of the elderly Philadelphia Greeks interviewed in the 1970s, remembers that he sailed off to Jerusalem and never returned.

The story of the first African-American Orthodox priest is truly amazing. The Greek American community needs to remember this interracial chapter of its history. Fr. Raphael's role in the life of Philadelphia is especially pertinent as the Greek Orthodox parish welcomes a growing Ethiopian community. Although congenial in their interactions, my sense is that the Greek parishioners have never truly embraced their African brethren the way that their ancestors embraced their black priest. Some of the most prominent African American Orthodox intellectuals today include Albert Raboteau, professor of religion at Princeton University, whom I had the pleasure of meeting at the Mount Menoikeion Seminar in 2005. Although I am not an expert in theological matters (and defer to Vasilis Marinis and Matthew Milliner on most issues), there seems to be some traction between historical Orthodoxy and African Christianity, rediscovered by African American intellectuals like Fr. Raphael Morgan and Professor Raboteau. The African American tradition in the Orthodox church is obviously an exception to the rule. Consider Raboteau's colleague at Princeton, Cornell West, who has most eloquently addressed Constantinian Christianity in his Democracy Matters: Winning the Fight against Imperialism (2004). For West and other liberal intellectuals, Orthodoxy's historical connections with empire (Byzantium) and state (modern nationalism) is a major turn-off. But for other intellectuals that have arrived to Orthodoxy through Anglicanism/Episcopalianism, the Orthodox tradition is softer and philosophically fundamental.
Posted by KOSTIS KOURELIS at 2:00 PM

Great post! Another contemporary African Orthodox example is Bob Marley, who converted to Ethiopian Orthodox Christianity from Rastafarianism towards the end of his life, as did his widow Rita after he died.