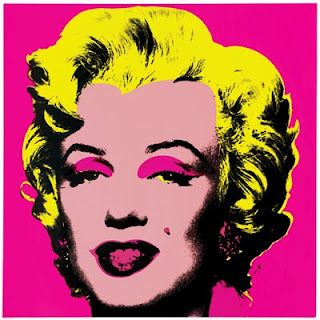 The Byzantine and Christian Museum of Athens is taking the word "icon" quite literally these days by hosting an Andy Warhol exhibition. Yes, that's right, an Andy Warhol exhibition called "Warhol/Icon: The Creation of Image" curated by Paul Moorhouse (previously at the Tate, currently 20th-Century Curator at the National Portrait Gallery, London). The connection between Byzantine icons and Warhol's Marilyn is well recognized and the first thing my students learn from Jansen's History of Art. Is the Byzantine Museum trying to be cool and even cash in some revenue? That would be a welcome direction, but a golden opportunity has been missed. Why not explore Warhol's actual biographical roots in Byzantine art, juxtaposing the Pop images with the icons that the young Warhola actually worshiped at Saint John Chrysostom's, the Ruthenian Catholic Church of Pittsburgh. That route, of course, would have to admit that Andy's church was Byzantine in style but Catholic in theology, which might scratch some Orthodox sores. The curators have not been daring in actually juxtaposing sacred art with Pop art, hence they have not crossed the line of critical contemplation.

I wouldn't mind the gratuitous bow to postmodern irony, if the Museum was not also hosting contradictory sentiments. How can you sponsor the ultimate apotheosis of relative value as well as the ultimate celebration of ethnic essentialism, the Museum's last visiting exhibition. "People and Icons: Refugee Relics" was on view this summer and featured works of art that were rescued from Asia Minor. The display of these relics affirms the nationalist role of the institution. The work of art is the portable testament of cultural autochthony. While Warhol celebrates semantic displacement and appropriation, refugee relics insist on grounding art with pathos, community and persecution. Coming back from the Modern Greek Studies Association conference at Vancouver, I have become keenly aware of Greece's cultural crisis. The nationalist myth is obviously not working and Greece is drowning without its crutch. The Warhol exhibit suggests metaphysical confusion, indeed.

I think it also needs to be said that Greece is obsessed with Warhol. There have been more Warhol exhibitions in Greece during the last two decades than any other artist (Greek and non-Greek alike). Thus, another Warhol exhibit is a cop-out. And ultimately, the exhibition was not designed by the museum. It was the work of two galleries, Haunch of Venison and Potnia Thiron. Warhol clearly sells in Greece. Why are Greeks obsessed with Andy yet so unwilling to embrace Andy's world (homosexuality, drugs, experimentation, fame, camp, drag-queens). At surface value, Warhol's art is very easy to "appreciate" and I think it's this ease that makes him so familiar to Greeks. I believe that Greeks are handicapped in visual literacy. Art appreciation is not taught at any level of primary or secondary education, and art history does not exist as a scholarly discipline at the university. All the cultural revenue placed on archaeology has robbed the people from fundamental education in art.

Andy Warhol remains the most sophisticated artist of the late 20th century. I hate to be a snob about such things, but I feel Warhol is lost to the innocent who don't understand the artistic context out of which his grew (the Post-Expressionist revolt, the gay aesthetics, the Greenberg-Rosenberg debates, etc.) Placing Warhol in the Byzantine and Christian Museum of Athens does not really help the Greeks to understand Warhol. Bring them some Pollock and de Kooning. Bring them some Stamos, some Kaldis, or some Baziotes (Warhol's Greek-American contemporaries). And then, perhaps, some fundamental education might take place. To bring the already fully enthroned king of Postmodernism to Greece one more time, moreover, reveals Greece's cultural subservience to New York, which for the time being is being packaged by London.

At the end of the day, however, I must admit how thrilled I was by the Byzantinizing font that advertises the show. I have been studying a bunch of pseudo-Byzantine 1930s scripts, invented by Anastasios Orlandos and others. This one here tops my list. I am particularly intrigued by certain effects, like the Russian (or episcopal) cross, by the primitive top-heavy "O" and, of course, by the Arts-and-Crafts "N" that has crept into the equation. The font is totally whacked from any serious consideration of typography, made more obvious by the lower line "the creation of image," taken out of a computer.

Thanks to Jon Seydl for keeping me up with what's happening in the art world by sending me relevant Artdaily.org postings. Sometimes, those postings are earth-shattering, especially for Jon's museum, see here.
Posted by KOSTIS KOURELIS at 9:04 PM