Layers of Architecture: The Greek Church(es) of Lancaster 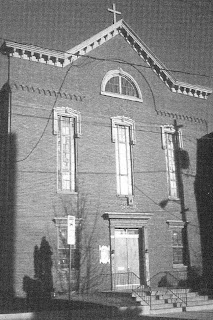 The rain finally stopped, and I took advantage of the sunshine by exploring some of the churches and cultural institutions of Lancaster. I visited a dozen of the major historical monuments in the downtown area, but also had informational meetings at the Lancaster County Historical Society and the Lancaster County Historic Preservation Trust. Both of these institutions will become important once the students of my Lancaster seminar start doing original research.

While at the Lancaster Historical Society, which is an amazing public resource for professional and non-professional historians, I browsed through the Society's journal and discovered a special issue devoted to the Greek-American community. The archaeology of Greek immigration has become one of my special interests developing out of my article for Timothy E. Gregory's Festschrift and the New Griffon 10 (2008). Just two weekends ago, I was fortunate to take part in a round table discussion at the Modern Greek Studies Association conference in Vancouver. "Notes from the Field: Working in/on the Hellenic Diaspora" was organized by Gregory Jusdanis and included presentations by Anna Karpathakis ("Learning Greek America as a Native Outsider"), Martha Klironomos ("The Relevance of Greek American Studies to Broader Academic Inquiry") and myself ("The Archaeology of Immigration: Material Culture and the Greek Diaspora").

I have also began a conversation with Vasilis Marinis on documenting the early churches of the Greek diaspora. Marinis studies liturgies and inter-denominational connections (hence perfectly positioned at the Yale Divinity School). My article on the Greek Orthodox Cathedral of Philadelphia explored issues of symbolic appropriation, namely the transformation of an Episcopalian space into a Greek-Orthodox liturgical space in 1921. Marinis' research reminds us of the unique ecumenical proximity between the Episcopalian (Anglican) and Orthodox faiths in the early 20th century. Although the two churches have clearly diverged intellectually, there was once serious talk over ecclesiastical union. It's such ideas that I brought along with me to the Lancaster County Historical Society.

Nikitas J. Zervanos, "The Early Greek Settlers of Lancaster County, 1896-1922 and the Annunciation Greek Orthodox Church," Journal of the Lancaster County Historical Society 110:3/4 (Fall/Winter 2008-2009), pp. 94-200, is a great piece of historical research and the fundamental study of the Greek community in Lancaster. It also provides some interesting information about the congregation's urban belonging. At around 1918, the Greek-American bishop Alexandros permitted Episcopal clergy to minister Greeks in Lancaster. The Greeks lacked their own priest and depended on the occasional visit by Reverend Petrides from the Annunciation in Philadelphia. Without a congregation, the Lancaster Greeks worshiped in St. John's Episcopal Church (321 W. Chestnut St.). The arrangement between the Episcopal clergy and the Greek community was an ecumenical gesture sanctioned by Patriarch Meletios IV of Constantinople and Bishop Alexandros, who were trying to establish a Greek Orthodox Archdiocese in America (ultimately founded in 1922). Obviously, the conservative elements of the Greek Orthodox Church, especially back in Greece, were not supportive.

After the early stint of borrowing space from St. John's Episcopal Church, the Greek community raised the funds to buy its own building. In 1916, St. Paul's Methodist Church (picture above by Zervanos) relocated (from 215 S. Queen St. to 10 W. Farnum St.). The Methodists upgraded from a modest brick building (1861) to a grand new structure (1916) across the street and sold the old building to the First Pentecostal Church. In turn, the Pentecostals upgraded six years later and moved to the former Reformed Episcopal Church (150 Locust St.). In 1922 the old building was sold to the Greeks, who rededicated as the Annunciation. Having inhabited an Episcopalian space without their own priest, the Greeks of Lancaster proudly converted a Methodist structure (temporarily used as Pentecostal) for their own needs. The building served as the heart of the Greek community until 1960, when the Greeks acquired new property and built an authentic Orthodox space. The new Annunciation (64 Hershey Ave.) continues to serve the Greeks of Lancaster today. The old Annunciation (St. Paul's, etc.) was sold to African-American newcomers. It served as Glad Tidings Temple, Assembly of God (1960-1972), Water Street Mission's Grace Chapel (1972-1981), and Brightside Baptist Church (1981-present). From its construction in 1861 until today, the Methodist St. Paul has served no less than six different communities.

Such complicated building genealogies are typical to American parishes, whose populations rapidly change under socio-economic pressures. Capitalist cycles of boom-and-bust cause geographical movement. Different denominations, ethnicities, races and classes play an urban dance of property and power. The immigrant's dislocation from Greece to America (the grand narrative) was effectively mitigated by a series of architectural adjustments (the micro narrative). The archaeologist of Greek-America can fill the gaps left by the grand transnational narrative. The immigrant's true story is dramatized in shifting spatial shells. Squatting in an Episcopal church is liturgically interesting. Equally interesting is transforming a Methodist hand-me-down into an Orthodox new home and finally passing it on to the next under-class. Surely, the 1960 Annunciation will be subjected to future pressures of space, time and human geography.
Posted by KOSTIS KOURELIS at 9:27 PM