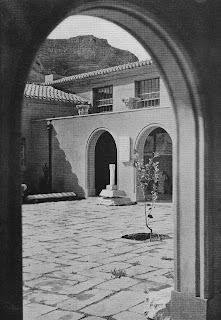 W. Stuart Thompson (1890-1968) held the fourth Fellowship in Architecture at the American School in 1912-1915. He is a unique figure for capitalizing on the possibilities of becoming the de facto School architect. Since the beginning of the architecture fellowship, the School capitalized on the availability of architects in residence to assist in the real estate development of the institution. It is interesting that the School during this period did not ever consider hiring local Greek architects for its buildings. W. Stuart Thompson received his A.B. at Columbia University in 1912 and spent two academic years in Athens. When he returned to the U.S. he built a successful private practice in partnership with Henry Churchill.

Thompson is a fascinating figure in maintaining a building career across the ocean. His designs for the School include Loring Hall, the Gennadeion Library, a proposed Benaki Museum (not built), and the Stoat of Attalos Reconstruction in Athens, Oakley House (with Richard Stillwell) and the New Museum in Corinth (picture left), the Museum at Mytilene. Outside of Greece, he designed the Farm School in Albania, the Morris Schinasi Memorial Hospital at Manisa, Turkey, and the American Hospital in Istanbul.

In the United States, he won a major award on the neighborhood planning competition of the 1939 World's Fair. In addition to houses, major American buildings include the State Tower Building in Syracuse, N.Y., the Crucible Steel Building in Chicago, Ill, the terminal of the Connecticut State Airport in Stamford, Conn., the Sterling-Winthrop research plant in Rennselaer, N.Y., academic buildings for Finch College, N.Y., the Greek Orthodox Church of the Archangels in Stamford, Conn. (modeled on the Holy Apostles in the Agora), and a proposed New York Academy of Sciences.

Unfortunately, there is very little scholarly work on W. Stuart Thompson. Interestingly enough, his building in Greece have received the greatest attention. See most notably the issue of New Griffon 7 )(2004) dedicated to the Gennadeion Library. The material evidence is ample for a Thompson research project, and we must wait for a major synthetic research project before making any important conclusions about Thompson's contribution to architecture more broadly. A casual overview of the extant material raises a number of pertinent questions outlined as follows:

I thought that WST had used Asia Minor refugees for the construction of the Gennadius Library hiring them at a very low cost. Natalia Vogeikoff-Brogan, ASCSA Archivist

I just want to point out that W. Stuart Thompson's wife was Gladys Slade. Anna McCann was his son, George Thompson's first wife. I am WST's grand daughter, and was reading your blog. Annie Thompson Masillo.