Gorham Stevens (1876-1963) was the first architecture fellow at the American School of Classical Studies at Athens and one the most accomplished. Stevens was born in Staten Island and received his architectural education at the earliest bastion of Beaux Arts education in America, at M.I.T. After graduation in 1899, he spend a year at the Ecole de Beaux Arts in Paris and travelled through Europe. Upon his return to the U.S., he began working for McKim, Mead, and White, the premier Beaux Arts firm. After a year, he received the American School Architecture Fellowship and spent a year in Greece concentrating on the study of the Erechtheion and contributing a chapter on architecture in Howard Fowler and James Wheeler's Handbook of Greek Archaeology (1909). He returned to McKim, Mead, and White in 1905. In Greece, however, he had fallen in love with Annette Notara, whom he married in 1906. As far as I can tell, Stevens is the first American School member to marry a Greek, a tradition that continues with Alice Walker Kosmopoulos (1924). In 1912, Stevens became the natural choice as director of the American School of Architecture in Rome, which merged with the American School of Classical Studies in Rome. McKim had been the School's patrons and architects of its new building. After 20 years of service to the Academy, Stevens returned to Greece in 1932 and resumed his research on Athenian monuments. He served as director of the American School during the difficult years of World War II. He formally retired in 1947 but continued to be active in the School, including involvement in the restoration of the Stoa of Attalos. He died in Athens, leaving the School his archives, his car, and an endowed scholarship. 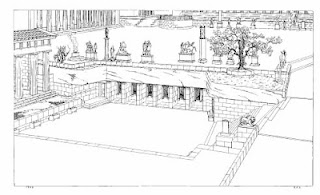 Stevens' architectural research was centered in Athens, on monuments of the Acropolis and the Agora. His contribution to Corinth include a study of Peirene Spring and some work at Isthmia. Stevens is an important figure in the precarious bridge between the Academy in Rome and the School in Athens. He also bolstered a personal connection to leading architectural firms in the U.S. (McKim, Mead, and White and their apprentices) and to the architecture program at M.I.T. Although removed from professional practice, Stevens was a powerful architectural force at the School. His reconstructions of ancient buildings (Peirene, Marathon Dam monument, Amphipolis Lion, Stoa of Attalos) had left their mark on the archaeological landscape.

Unfortunately, the scholarly literature on Gorham Stevens is limited. General biographical information is given in Lucy Shoe's obituary (American Journal of Archaeology 68 [1964], 189-190). His Papers reside at the American School Archive in Athens, see Finding Aid compiled by Natalia Vogeikoff. Additional material is found at the American Academy in Rome records housed at the Archives of American Art at the Smithsonian. For Stevens' work in Corinth and reconstruction of Peirene, see Betsey Robinson, Histories of Peirene (2012), pp. 106-107. Gorhams Stevens needs a dissertation.

Photo of Stevens above, from American School of Classical Studies at Athens, Archives
Reconstruction of Peirene above, from Corinth I.6, pl. X

For more Corinth Architects, see here
Posted by KOSTIS KOURELIS at 11:23 AM