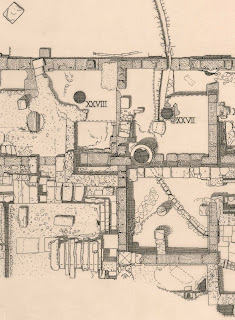 The American Schools of Classical Studies in Rome and in Athens were founded by common objectives, to promote classical scholarship. The School in Rome encountered a friendly partner, the American School of Architecture, established in 1895 to serve the needs of America's growing Beaux Arts educational programs at the Massachusetts Institute of Technology (1865), the University of Pennsylvania (1868) and Columbia University (1881). Modeled on the 17th-century French "School of Fine Arts" from which it took its name, the American Beaux Arts system required pensionnaires, or sponsored residential fellows awarded on a competitive basis (the Prix de Rome) to study classical monuments in their archaeological setting. The merging of the American Schools of Classical Studies and Architecture in 1912 brought archaeology and architectural education under the same institutional framework. Thus, it was common for students of archaeology to interact with figures such as A. M. Robert Stern, Leon Krier, or Robert Venturi under one common roof.

In contrast to the American Academy, the American School of Classical Studies at Athens did not share the cross-fertilization between architects and classicists institutionally central to life in Rome. The School in Athens surpassed Rome, however, in archaeological activities and needed professional staff to manage the architectural complexity of its excavations. Rather than a coherent architectural system of study, the need for architectural staff ushered the architectural discipline into the School in Athens through the back door. An established program in Architectural Fellowships brought a crop of architects through the excavations in Corinth and Athens during the first three decades of the 20th century. Lacking the prestige of the Grand Prix de Rome, these architects have receded from the institutional memory of the American School with the exception of a few fellows who made themselves more permanent in Greece either by turning into professional archaeologists or monopolizing the School's architectural commissions.

It is the lack of scholarship on the architects of the School that has led the beginnings of this research project. The meticulous organization of the Corinth architectural drawings by James Herbst (and their digitization) has further motivated a fresh look into the architects of Corinth. I will share the research on this blog, and attempt to synthesize some preliminary research. James Herbst and I hope that this study will ultimately create a more permanent expression, an article, book, or exhibit.

So, who are the Architects of Corinth and how did they end up in Corinth? As the excavations in Corinth proceeded at the turn of the 20th century, it became clear that the employment of a professional architect was necessary. A position of Fellow in Architecture was, thus, created in 1903. A grant from the Carnegie Corporation financed the fellowship during its early years (1904-1912). The Fellowship program terminated in 1933 after supporting a total of 12 architects:

In addition to the official architecture fellows, a number of other architects joined the excavations, unofficially contributing to the architectural culture of Corinth. Those were:

In addition to documenting archaeological buildings, the fellows were also brought into the service of the School's own architectural projects in Athens, Corinth, and Samos (Loring Hall, Gennadeion Library, Samos Museum, Oakley House, Corinth Museum, etc.) Many of the fellows returned to architectural practice in the U.S. but little attention has been given to the relationship between their professional practice and their archaeological apprenticeship.

It is also interesting that after the 1930s, after World War II, the program of architectural fellowships terminates any organic interaction between America and Greece. One notable exception is Charles K. Williams II, who practiced architecture at the office of Philip Johnson before becoming director of excavations in Corinth. The American School turned almost entirely to Greek architects for its archaeological staff after the 1930s, and most notably to John Travlos. Some of them are obscure and warrant some research. Those post-war Greek architects are

For a general introduction to American architecture education, archaeology and the culture of drafting, see the following:

Neumann, Dietrich. 2002. “Teaching the History of Architecture in Germany, Austria, and Switzerland: ‘Architekturgeschichte’ vs. ‘Bauforschung’,” Journal of the Society of Architectural Historians 61, pp. 370-380