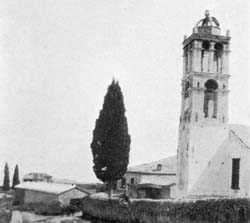 Another obscure architect at the American School was Henry Dunn Wood (1882-1940), the third Fellow in Architecture in residence in 1906-1908. Wood received his B.S. from the University of Pennsylvania in 1904, winning the Gold Medal in Design. He was a member of the first class at Penn graduating  under Paul Cret. It was known as a great class and it included Henry Hibbs, Dave Allison, Walter Mellor, Leicester Holland (also Corinth Architect), Bill Gordon, and Frank Reynolds. He received his fellowship at the American School after two years of professional practice in Philadelphia. While in Greece he worked on the Propylaia of the Acropolis, where he laid the foundations for William Bell Dinsmoor's future studies, and at the excavations of the Forum in Corinth.

Upon his return to Philadelphia Wood made a spectacular display of his drawings from Corinth (and Athens) at the 1909 annual exhibition of the American Institute of Architects in Philadelphia, which took place at he Pennsylvania Academy of Fine Arts. Among the drawings that he exhibited were the plan for the excavations, a plan for the restoration of the North side of the Forum, along with five photographs: "Church of the Holy Preparation," "Temple of Apollo," "Excavations at Corinth, North Side of Market Place," "Courtyard of a House," and "Church of Saint George." The last photo was reproduced in the Year Book of the exhibition (see above). Although labeled "Saint George" it seems to be of the old Panagia Church, where Guy D. R. Sanders excavated in the 1990s. A copy of the North Market restoration drawing displayed in Philadelphia in 1909 is housed at the Corinth Excavation archive, and I thank James Herbst for finding it (Corinth Drawing No. 020-026). 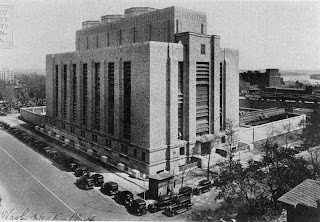 Wood was an active member of the T Square Club and the Philadelphia chapter of the American Institute of Architects since 1903 and a lecturer at Penn in 1911-1912. Just as he was ready to embark on a private architectural practice, he was offered a position at Philadelphia's large utility company United Engineers, where he rose from draughtsman to head of his department. His temperament seems to have fitted such team work. As a result, he designed many industrial plans. When his mentor, Paul Cret, received the commission for the Central Heating Plant of Washington, D.C. (left), Wood designed the building's interior.

Wood lived on a 324 Earlham Terrace in the Germantown neighborhood of Philadelphia. He died at the age of 58, on March 26, 1940, a few days before the German invasion of Denmark and the beginning of World War II. His obituary by Paul Cret appeared in Federal Architect, a Washington journal edited by a fellow Penn student.

And now on a personal note. While researching Henry Wood at the Fine Arts Library at the University of Pennsylvania, I consulted the Year Books of the annual architectural exhibition in Philadelphia (which my student Chelsea Troppauer introduced me to, while working on her Preservation Master's thesis). Browsing through the 1917 issue, a magical thing happened. The very same volume I was reading was once owned by Henry D Wood. See his signature at the beginning of the volume. What serendipity. The volume that Chelsea had showed me earlier, I realized was owned by Paul Cret. The crazy thing is that Chelsea learned all about Paul Cret in my seminar on 1930s architecture two years ago at F&M. Here is Wood's signature:

Posted by KOSTIS KOURELIS at 11:08 AM