Ruskin: Beautiful but not Pretty 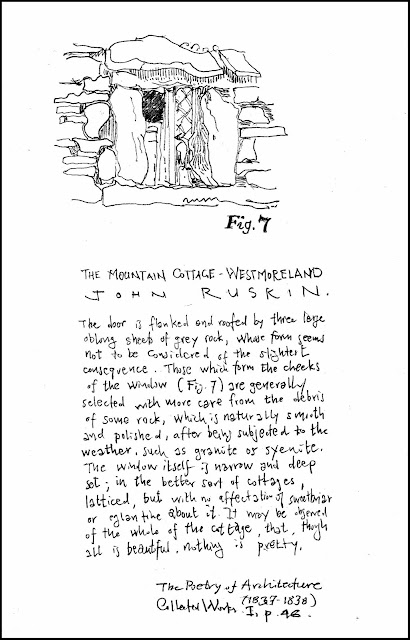 I begin a series of postings that one might call "Ruskin in Greece," although Ruskin (like Goethe) never crossed the Adriatic. Had he traveled to Greece, the prevalent Neoclassicism of the nascent nation-state would have crushed him. Greece's aspirations were so diametrically opposed to Ruskin's philosophy of art that any cross-fertilization between Ruskin and Greece seems ridiculous, Hence the names Ruskin and Hellas have never been put next to each other in scholarship. Nevertheless, I would argue that Ruskin cast a long shadow over Greece. It's the contours of this shadow that I will be tracing.

The earliest manifestation of Ruskin's theory of culture were articulated on a work devoted to domestic architecture. Ruskin wrote "The Poetry of Architecture" under the pseudonym Kata Phuysin ("According to Nature"), humorously tackling the classicist status quo. Mr. According to Nature studies the interplay between "national scenery and national character" in Europe's vernacular architecture. The book was serialized in 1837-38 and is the first book in Ruskin's 39-volume Collected Works (ed. E. T. Cook, London, 1912)

Had Ruskin visited Greece, he would have included a chapter on its mountain villages. His observations here would have been similar to his observations on the highlands of England and Wales, the mountain cottages of Westmoreland and Cumberland. I sketch Ruskin's illustrations of a window and his eloquent language of description. "It may be observed of the whole of the cottage," he concludes, "that, though all is beautiful, nothing is pretty." Thus, in 1837, sets up a new aesthetic discourse on vernacular architecture.

I tackle "The Poetry of Architecture"while researching an episode of Byzantine archaeology in Greece, when Ruskin's own students brought Ruskinian notions to Greece while documenting Byzantine monuments. Ruskin had placed Byzantium in a paradigmatic position for western culture, but Venice was the closest he got to it. It is natural that his students would take his mission further east through the Byzantine Research Fund at the British School at Athens. The group of Ruskin students in Greece include W. S. George, Robert Schultz, Sidney Barnsley and Ramsay Traquair. I had the great pleasure to study the drawing collection of these architects this summer. Many thanks to BSA archivist Amalia Kakissis for all her help. Moreover, the British School is organizing a conference on Byzantium and the Arts and Crafts movement in London, where I hope to present "Ruskin's Greek Shadow: The British School in Athens and the Byzantine House." The project hopes to untangle W. S. George's unpublished house drawings of Mystras, a topic related to my forthcoming essay on the houses of Mystras
Posted by KOSTIS KOURELIS at 5:32 AM

Spectacular. Going to have to think about this for awhile.