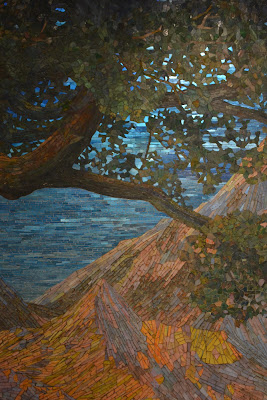 This boot remembers the irregular surfaces of mountain that it has traversed. Once you leave the last cultivated contour, where even the thinnest accumulation of soil hosts some kermes oak, you ascend on pure rock. From the perspective of the hiker, the mountain is not a solid  pyramidal form but a surface of shattered chips, a scattering of unstable fragments that crunch under the boot and destabilize any expectation of shore footing. This most visceral experience of Greek mountains came to mind as I read Ruskin's introduction of the fifth chapter of The Stones of Venice, the Wall Veil. I have to quote the passage in full because I have never found the words to describe that sensation of stepping on a land-mass whose own ruin crumble under your feet.

The slope of the rocks is covered two feet deep with their ruins, a mass of loose and slaty shale, or a dull brick-red colour, which yields beneath the foot like ashes, so that, in running down, you step one yard, and slide three. The rock is indeed hard beneath, but still disposed in thin courses of these cloven shales, so finely laid that they look in places more like a heap of unmitigated surprise, as if the mountain were upheld by miracle; but surprise becomes more intelligent reverence for the great Builder, when we find, in the middle of the mass of these dead leaves, a course of living rock, of quartz as white as the snow that encircles it, and harder than a bed of steel.

Ruskin is describing the north-west slopes of Matterhorn in the Alps, where he developed an early theory of place and geological stratigraphy, of principal lines and striation. Here, in the borders between Switzerland and Italy, between pure landscape and pure culture, Ruskin became a premier mountain theorists. In my search for Ruskin's influence in Greece, I have found the earliest translation in the avant-garde journal To Trito Mati (1935), three essays from Ruskin's Modern Painters including "The Mountain." An earlier conversation between the Alps and the Greek mountains took place in 1907, when Swiss photographer Fred Boissonans came to Greece to climb Mount Olympus and staid to produce the most eloquent record of rural Greek culture.

Ruskin's passage from The Stones of Venice reminded me of another representation of  the mountain's tactile fragmentation, the Dream Garden mosaic of Maxfield Parrish commissioned by the Edward Bok of the Curtis Publishing Company in 1916. Parrish's mountain in fragmented by the virtue of the pieces manufactured by the Tiffany Studios. My photo above is from a recent visit with fellow art historian Michael Clapper and Parrish expert.
Posted by KOSTIS KOURELIS at 7:20 PM