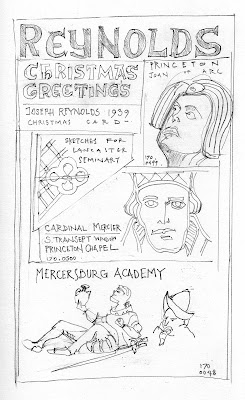 During the last two weeks, I have been stealing moments from my busy days to hide in the microfilm room at the Shadek Fackenthal Library, where I have been browsing through the Joseph Reynolds Papers, borrowed from the Smithsonian Institute's Archive of American Art. The image on the left are just from my visual notes. I am stunned by the volume of archival data on Reynolds stained glass windows, which seems reversely proportional to the scholarship on such Arts-and-Craftsmen of Twenties America. Reynolds grew up in Rhode Island, went to RISDI and apprenticed with the founder of the medieval stained glass movement in America Charles Connick. Coalescing around a circle of Boston aesthetes, these craftsman have accumulated the reputation of traditionalists. This might explain the scholarly disinterest. Although working within a revivalist idiom, their reputation is misleading. Douglas Shand-Tucci's biography of Ralph Adams Cram illustrates how radical this circle actually was, spinning from the Ruskinian aestheticism of Harvard's fine art program. Shand-Tucci argues that the Gothic was simply a "Trojan horse" for a more radical agenda. Reynolds firm, Reynolds, Francis and Rohnstock, designed some of the most important stained glass windows in America from the National Cathedral in Washington to Princeton's Memorial Chapel.

In 1925, Reynolds designed the windows of the Lancaster Theological Seminary. The Seminary of the German Reformed Church had been part of Franklin and Marshall College. But in 1893, it crossed College Avenue to a new Romanesque Revival building. Just one generation later, however, the Seminary sought to Gothicize its Romanesque space by commissioning a set of stained glass windows. The renovation was intended to coincide with the Centennial Celebration of the seminary (1825-1925). When Charles Connick published his Adventures in Light and Color (1937) he listed Lancaster Seminary as one of the most noteworthy stained glass windows. Interestingly enough, he credits Zantzinger, Borie and Medary as the architects for the renovation. This in itself is a great discovery, as the architects for the renovation have been forgotten by the seminary. Zantzinger, Borie and Medary was one of the most notable architectural firms in Philadelphia. To have found an example of their work in Lancaster is truly sensational.

My dark journey in the archive of Reynolds has been acutely enjoyable, perhaps the highlight of my semester. I have discovered all kinds of historical evidence that I look forward to publishing in the near future. Here is a mind-blowing detail, for example. In the Martin Luther window, King Charles V holds a spectre that contains a bright red piece of glass. That red piece of glass is an original work of the 13th-century French Gothic. Reynolds notes that the piece of glass was actually taken directly from Rouen Cathedral. The seamless inclusion of a medieval relic in a medieval revival work begs all kinds of questions regarding reference and referent, the aura of the original and its relationship to the imitation in which it is encased.

A year after working on the Lancaster Seminary, Reynolds also designed the windows for Mercersburg Academy Chapel designed by Ralph Adam Cram. Mercersburg was the home of Marshall College from 1836 to 1853 before it merged with Franklin College to form Franklin and Marshall. Once the college left, Mersersburg became a preparatory school. The Mercersburg Theology is a famous theological movement associated with our college hence Reynolds commissions between the two places are critical. As a preparatory school, the Mercersburg Academy was the brainchild of William Mann Irvine. He was a professor at Franklin and Marshall that became the Academy's headmaster in 1893. The Mercersburg Chapel was dedicated in 1926 to honor the alumni that had died during World War I.

I am also very much interested in the stained glass windows that Reynolds, Francis and Rohnstock designed for the Princeton Chapel because they related to my research of Corinth architects and Princetonites like Richard Stillwell. Reynolds designed the Great Windows at the North and South Transept of the Princeton Chapel. The North Window, in particular, has "Scholarship" as its theme and it was paid by Robert Garrett who financed Howard Crosby Butler's archaeological expeditions to Syria, where Stillwell received his archaeological training. The South Window, whose theme is "The Triumph over Suffering" features an unexpected character, Cardinal Mercier, among Joan of Arc and Thomas Becket. Mercier was a Belgian cardinal made famous for his resistance against the German invasion in 1914. As has been noted by other scholars, the Gothic Revival of the 1920s, which is acutely Francophile, has much to do with the American experience in World War I. Faced by the horrors of an industrial war and massive death (37 million), the medieval past offered a return to chivalry and honor. There is another connection between Princeton and Mercersburg. William Mann Irvine received his PhD in political science from Princeton, where Woodrow Wilson had just joined the department of government. Irvine's vision for Mercersburg might have been, thus, flavored by a common Wilsonian vision of internationalism.
Posted by KOSTIS KOURELIS at 11:46 PM