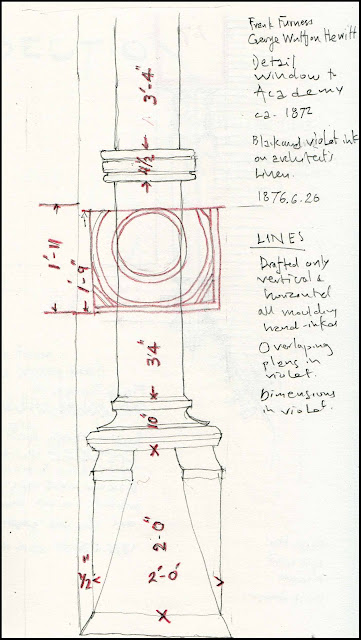 While looking for architectural manifestations of John Ruskin, most typically turn to William Butterfield's All Saints Margaret Street or Dean and Woodward's Oxford University Museum of Natural Science. But I turn a little closer to home in the work of Frank Furness. Thanks to his intellectual and geographical distance, Furness captures a most vivid Ruskinian aesthetics. The same can be said of a few H. H. Richardson buildings, like Trinity Church at Copley Square.

The year 2012 has been the year of Frank Furness, as many Philadelphia institutions commemorate his genius. For a complete list of "Furness: Inventing Modern," see here. I have been doing the rounds in Furnessiana relishing in all the original drawings from Furness and Hewitt's office and have taken some notes.

VIOLET. The Beaux Arts tradition (from Richard Morris Hunt's atelier) is evident in the use of violet ink to demarcate the poche in plans and sections. In the tradition of the Analytique, we also have plans overlapping elevations, the former differentiated by violet. My sketch replicates a detail from the granite double-shafts in the exterior of the Pennsylvania Academy of Fine Arts (No. 1876.6.20). Overlapping the column cylinder, you see the column plan. Between the black lines of the elevation and the violet lines of the plan, we can reconstruct the three-dimensional column.

Another discovery in the Furness/Hewitt drawings was the interplay between drafting and free hand. All horizontal and vertical lines are drafted, but all curvilinear lines are done free-hand and this is not limited to the ornate sculptural capital but to every piece of moulding. This is noticeable only if you study the actual drawing, but the line thickness of free hand is evident in the variation of the inked line.
Posted by KOSTIS KOURELIS at 8:58 AM