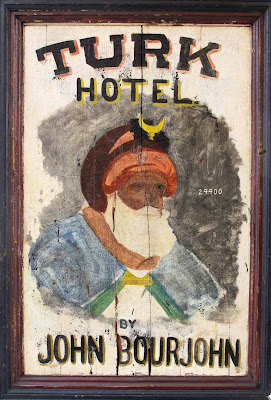 My two great interests, Pennsylvania vernacular and Mediterranean archaeology, converge on this fabulous trade sign from Doylestown. The sign was given to the Doylestown Historical Society in 1930 and it currently hangs in the museum's lobby. I saw it last Spring during F&M's field trip to the Mercer Museum. I quote all the known information about the piece:

The Turk Hotel was located near the intersection of Easton Road and the Turk Road in Doylestown Township. Turk Road originally took its name from the crossroads tavern. The sign has been repainted many times. Its present appearance dates to c. 1885. John Bourjohn, whose name appears on the signboard operated the establishment between 1884 and 1886. In 1886 Bourjohn was refused renewal of his tavern license due to his sales of liquor to minors, and on Sundays.

The photo was taken by F&M Art History colleague Rick Ken.
For more posts on 19th-century Islamic Philadelphia, see here.
Posted by KOSTIS KOURELIS at 11:24 AM