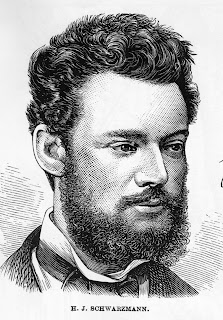 I'm reading more about the Centennial Exhibition of 1876, specifically on the work of its main architect, Herman Schwarzmann. Specifically, I'm reading the monograph by John Maass, The Glorious Enterprise: The Centennial Exhibition of 1876 and H. J. Schwarzmann, Architect-in-Chief (Watkins Glen, N.Y., 1973). The Philadelphia Centennial celebrated 100 years after the signing of the Declaration of Independence and was the first official World's Fair in the United States, followed by the Colombia World's Exhibition of Chicago in 1893. It was a momentous event of national redefinition. The equivalent of 20% of the U.S. population visited the exhibition. These numbers are astounding. See earlier postings on Centennial here and here.

I am interested in the Exhibition for many reasons. But as an archaeologist of the medieval Mediterranean, I am especially intrigued by Schwarzmann's Horticultural Hall because it was designed in an Islamic style.

Before discussing Horticultural Hall, let me note that Schwarzmann was an architect from Munich. As a young painter, he learned the art of fresco painting and was employed by the court of Ludwig. Amazingly enough, he executed the frescoes in the Royal Palace in Athens for Ludwig's son, Otto the King of Greece (p. 12). This is an important detail showing that Scharzmann would have come into direct contact with Islamic visual culture, in the remnants of Ottoman Greece. In 1868, Schwarzmann emigrated to the U.S. As would be natural for a German, Schwarzmann settled in Philadelphia and began work on projects associated with Fairmount Park. Schwarzmann was selected as the chief architect for the 1876 exhibition. 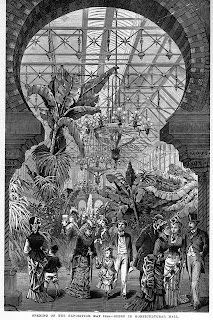 Horticultural Hall was one of the Exhibition's five principle building and the largest conservatory built in the world. In Schwarzmann's words "the design is in the Moresque style of architecture of the twelfth century, the principal materials externally being iron and glass" (p. 60). Strange as it may seem to us today, the Orientalist mindset associated exotic plants with Islam. As early as 1843, German conservatories used Islamic prototypes, such as the conservatory in the Wilhelmina at Stuttgart (1843), the Paris Exposition (1867) and the Vienna Exposition (1873). Schwarzmann was, therefore, importing European notions of exoticism into the U.S.

John Maass has traced the specific origins of Schwarzmann's Islamic features to the following sources: "The brick arcade of striped pattern may be derived from the engravings of the 12th Century mosque Barbauk and El Moyed in Architecture Arabe ou Monuments Du Kaire by Pascal Coste (1839). We know Schwarzmann studied the Corquis d'Architecture: the September 1869 issue featured a large drawing of the court of the mosque in Cairo with striped arches; the first issue published after the Franco-German War, in April 1871, carried a drawing Court of Old House, Cairo with striped arches." (p. 65) 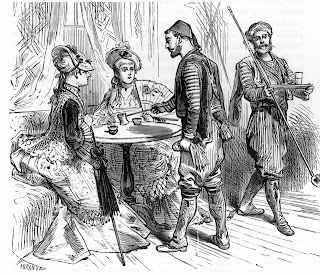 The presence of a dominant eastern flavor in America's antebellum self-representation is intriguing. I am also intrigued in imagining Schwarzmann's direct memories of the Ottoman East while working for King Otto in Athens.
Posted by KOSTIS KOURELIS at 2:38 PM

It is interesting what journalism could do with the names of the Islamic Monuments, and their dates. The Barquq (there were two of them, but this surely has to be the later) meant is Faraj Ibn Barquq who built one of the best preserved complexes in the Cemetery area. It did indeed use alternating stripes of colored stone (a sort if brick red and cream white) on the doorways, but in a fairly restrained way. The building was completed in 1411. His immediate successor, al Muayyad Shaykh built inside the city, just north of the south gate, Bab-Zuweyla. He is especially remembered for a huge bath (now almost totally in ruins) built to expunge the memory of a period of unwashed confinement near the same gate. His large courtyard-style mosque is nearby.

Pierre A said
Further on Islamic Philadelphia
The best source of truly splendid pictures of Mediaeval Cairo, in glorious hand-painted Technicolor, was published in by David Roberts, Egypt and Nubia, 3 volumes 1846—49. It is a precious resource for view of Mamluk architecture before the commercial and environmental depredations of the 20th century.

Am looking for name of architect who designed the first horticultural hall on Broad street in 1867. It was built for the PA horticultural society. I believe the architect was Samuel Sloan, but having conflicting info. It burned in 1881, was rebuilt in 1882 by W. L. Shaffer, burned again in 1893. Building that is there now is the Shubert Theatre. Appreciate any help, I'm transcribing an 1866-67 diary of a gentleman who talks about going there in June 1867 and wanted to know a little more about the building. Thanks for your assistance! Catherine in Tucson

Dear Catherine. I'm sorry I can't be of any help. I haven't come across any references to the first horticultural hall on Broad Street. I know a little bit about Samuel Sloan (in fact my office is in a Sloan building) but not enough. I suspect you are already familiar with this database: http://www.philadelphiabuildings.org/pab/app/ar_display.cfm?ArchitectId=A1287