We find objects and objects find us. These two modes reflect epistemologies situated in two polar extremes, archaeology (we find objects) and poetry (objects find us). On my daily walk between Lancaster's Pennsylvania Station and my office at Franklin & Marshall, I cross a few topographies usually with headphones wrapped around my ears, catching up on my weekly podcasts (This American Life, Studio 360, Radio 3 Arts and Ideas, A History of the World in 100 Objects, the Moth, New Yorker Fiction, In Our Times with Melvin Bragg). My gaze occasionally descends and I intake information from the ground and all its surfaces. I cannot keep the surface surveyor's thoughts out of the commute. Yesterday, on my first day after a conference steeped into the dialectics of archaeology, a poetic object was offered to me by the street, the fragment of a smashed up cell phone. I bent over and picked it up. The object was wet from a mixture of black dirt and the rain. I held it cautiously with two fingers trying to keep my hand clean. About 80 yards later, I found
Publish Post
another fragment of the same object. Having chosen to pick the first fragment, this second piece seemed fated, a congratulatory gift. And I cannot fail to recognize that the pick-up act was totally therapeutic, dissolving all the academic anxiety that the conference had raised. Michael Shanks has engaged Julia Kristeva into the conversation. Postprocessualism lets me embrace the archaeological Abject, and I don't care anymore that my reading list is not shared by everyone (see Kristeva's Murder in Byzantium).

Even the most unsentimental pedestrian could not have resisted bending down to pick up this ordinary eloquent object. The physical debris turns poetic and we pay attention. We find it difficult to resist 1) feeling sorry for the owner of the phone that might have lost it, 2) reconstructing the process of loss (did it slip out a pocket, or was it violently thrown from a window?), 3) imagining the feminine modes marketed in magenta, 4) marvel at the circuitry, 5) feel the violence of physical scrapes against the pristine electronics, 6) ponder on the objects maker somewhere in China, etc. etc. I picked up the object and henceforth began a new series of posts called Objects of Lancaster. The series relates to my earlier thoughts on the train commute (that precedes the walk), see "Trainscape: Philadelphia-Lancaster" (March 5).

I took the fragments to my office, washed off the dirt, dried up the clean water with napkins, and let the object air-dry on an orange chair, where students sit during office hours. Today, I scanned the dry fragments on the Art & Art History Department's scanner with a manila envelope as background. I did not include a scale figure fearing that it would add an unnecessary aura of science and factuality. The image below shows the "front" of Object 001 (right) and Object 002 (left), and then the "back" of both objects. If I had more time, I would love to take the objects to the next level, the analytical drawing, inspired by Ben Leech's "Subterranean Recovery Crew" shown in Old Weird Lancaster. 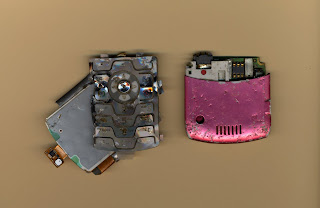 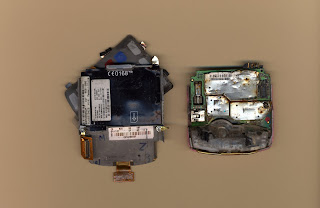 I don't have very much to say about this discarded cell phone, so I'll let it be but simply provide some basic documentation and the context. Below, I clip a Google Earth image (taken from the PA Department of Conservation and Natural Resources. The two pins illustrate the find spots. The building in the upper right is Lancaster's Pennsylvania Station (with adjacent tracks, driveway, parking) and the apsed building on the lower left is a car dealership (with adjacent lot).

The cell phone fragment led me to believe that I should easily be able to identify the vintage of the original product. Actually, it is not that easy to get information about older cell phones; the web is saturated by new models. Frankly, I wasn't very successful in fine-tuning my search. My gut feeling is that the fragments belong to a Motorola RAZR type of phone, but not the most recent model (shown left). Something about the width, also directs me to Motorola.

As you can see in the scanned images, a few codes survive in the interior part of the phone. Barcodes and numbers identify the inner parts. Unfortunately, I have no idea what all these numbers mean. But here they are:

Posted by KOSTIS KOURELIS at 10:11 AM

Yup, Motorola RAZR V3. Someone named Holly apparently asked the Yahoo! hive mind on your behalf, and it answered: