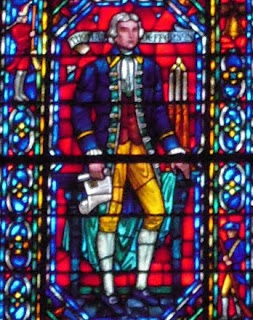 Homi Bhabba uses the term "colonial mimicry" to articulate some of the strategies that a liberated colony undertakes. In building its two national cathedrals (St. John the Divine in New York and the National Cathedral in Washington), America mimicked the perceived superiority of the colonizer's medieval culture (Britain) to the expense of any indigenous expression, including the suppression of Native American heritage. The National Cathedral copies 14th-century British Gothic. Washington's first bishop, Henry Yates Saterlee was influenced by Ralph Adams Cram's neo-medieval vision. Cram is typically seen as a conservative revivalist. Reading his writings, however, I now see him as a radical; see, for example, Cram's Walled Towns, 1919, available on-line here.

While in Washington for the Dumbarton Oaks archaeology conference, I made sure to visit the Washington Cathedral to inspect what Elizabeth Emery has analyzed as a post-colonial graft onto a foreign prototype. I made sure to snap a photo of Thomas Jefferson (left) who was grafted into a stained glass window, on the north of the Cathedral, an attempt to softly de-colonize an uber-colonized project. And Jefferson is not alone in these modern stained glass windows. St. John the Divine, the National Cathedral and John D. Rockefeller's Riverside Church have numerous grafted images of American colonial heroes, of Native Americans and of modern life (Victrolas, automobiles, etc.) onto an otherwise medieval simulacra. Riverside Church is especially interesting as a protest gesture by Rockefeller, who was a Baptist and, thus, excluded from the "ecumenical" board of Episcopalian elites. When Albert Einstein visited Riverside Church, he was amused to find himself (a German Jewish physicist) inserted into the stained glass windows, along with Hippocrates, Newton, Darwin and Pasteur. America's Gothic cathedrals of the 1920s should be set apart from the Gothic revival movement of the 19th century. They are not simply more encyclopedic or more correct to their prototypes. They represent America's early engagement with modernity and the identity crises that it produces.

Visiting the National Cathedral was especially enriching because that very weekend I was addressing attitudes of of Byzantium in American archaeological practices. My inspiration for the visit was a wonderful new essay by Elizabeth Emery, "Postcolonial Gothic: The Medievalism of America's 'National' Cathedrals," in Medievalisms in the Postcolonial World, ed. Kathleen Davis and Nadia Altschul (Baltimore, 2009), pp. 237-264.
Posted by KOSTIS KOURELIS at 8:57 PM

Not knowing the book you refer to, I am not sure about the "mimicry" thing, and without knowing the book it sounds like a cheap dig. People want to build a cathedral: they know what a cathedral looks like: that's what they build. It goes with the liturgy they use. That seems quite simple.

I saw the National Cathedral grow from a pup -- nothing past the transept -- to a full construction with tower, bell peal, rose window, tympanum carvings, and great doors, and have loved the particular American accent given. For example, the American Indians, birds, and plants around the north garden. Or the dogwood on the front doors. [I suspect some of the same craftsmen as worked on the Bliss house at DO.] I have loved seeing statues go up of people I have actually known. Many of the windows you cite are part of the program of a particular donor, and donor choices are always interesting. But putting in 20ht-21stC American things in stained glass windows is not grafting -- it is continuing the organic growth that good cathedrals must have. I saw the moon-rock window before its formal dedication, and this inclusion says interesting things about some of the theological shifts I have seen since my first contribution to the building program in 1964