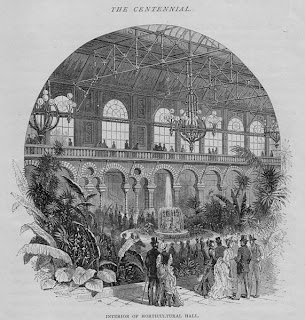 My good friend and occasional contributor to this blog Jenn Ball was visiting Philadelphia this weekend (with her husband and two lovely daughters). She was staying with a friend from her graduate school who now lives in Philadelphia (with her husband and lovely daughter). Within the first few minutes of our visit to Jenn’s friend’s house, it became obvious that we are all interconnected by a web of social relationships and professional affiliations. I don’t want to bore the readers with all the details. Suffice it to say that the city of Philadelphia offers what might be called “social capital” that intersects with our host Richardson Dilworth, a political scientist at Drexel University and husband of Jenn's friend. It was especially amusing to meet Dilworth soon after Franklin & Marshall's president was announced to become Drexel's new president.

Dilworth has edited a collection of papers, Social Capital in the City: Community and Civic Life in Philadelphia (Philadelphia, 2006) that contains an essay by an old friend and new colleague at Franklin & Marshall Jerome Hodos. In some kaleidoscopic way, I use this book to understand both my city of inhabitance and my itinerant network of academia/personal life. Dilworth’s book is dedicated to his daughter Nina “because she and the rest of her cohort of toddler Philadelphians are already well on their way to forming their own social network and building anew a collective stock of social capital in the city.” (p. xi) Our meeting this last Saturday was just as much a meeting of children as a meeting of adults and I look forward to seeing more of everyone involved.

I turn now to Hodos’ essay “The 1876 Centennial in Philadelphia: Elite Networks and Political Culture,” Social Capital (pp. 19-39) because it deals with an event of great architectural interest, the 1876 Centennial Exhibition in Philadelphia. From an art-historical point of view, the 1876 Centennial was transformative. See, for example, Elizabeth Milroy’s “A Crowning Feature: The Centennial Exhibition and Philadelphia’s Horticultural Hall” in Studies in the History of Gardens and Designed Landscapes 26:2 (2006), pp. 132-165. Coincidentally, Milroy was the dean that hired my wife at her previous job. Hodos offers a different point of view on how political capital intersects with social capital. In short, the 1876 Centennial managed to push the city beyond a political gridlock and into modernity. Jerome Hodos, explains that the exhibition solved a political puzzle that plagued the city’s transition into an industrial metropolis. Four particular problems confronted the antebellum city, 1. rapid population growth, 2. intense industrialization, 3. public disorder, and 4. a change of guard in the ruling elites (namely from a mercantile class to an industrial class). The Civil War had divided the city's double allegiances to both the North and the South. Support for the Democratic party comprised of a pro-Southern alliance. Republicanism, which emerged victorious and remained unchallenged for 60 years after the Centennial, coalesced in the 1870s and was assisted by the organization of the exhibition.

The essays in this collection deal with a definition of social capital developed by Robert Putnam in a book with the most memorable title, Bowling Alone: The Collapse and Revival of American Community (New York, 2000). Hodos argues that social capital developed when political hegemony needed to move outside its economic/political domain and collaborate with culture. The Centennial offered precisely that opportunity. More importantly, the Centennial as a historical case study reveals the inter-penetrability of intellectual realms. I know this relates to a Durkheim vs. Weber conceptual problem, but my social theory is to rusty to tackle here. Thanks to the academic social network, I can simply ask Hodos for details next time I see him on campus.

Much of the pleasure of reading a friend’s work is hearing their voice behind the text but also learning a tremendous amount without having to bother them. Hodos’ essay is full of great nuggets. I had no idea that the Democrat-Republican rivalry in Philadelphia's civic politics reflected Southern allegiances. I am reminded of the Philadelphia enclaves in Charleston from Clemson's Charleston Preservation program. I was also interested to learn that in 1850, Philadelphia was almost 5% African American and 5.6% German born. Over the weekend, I chanced on a mid-19th century building abandoned by its German community (part of the Trainscape exploration). Now I have a context.
Posted by KOSTIS KOURELIS at 10:07 AM