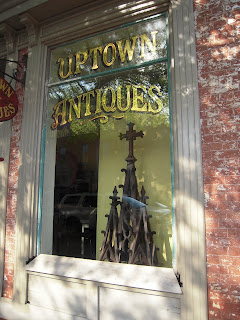 Jennifer Kopf, Lifestyle co-editor for Lancaster's newspaper The Intelligencer asked me to ponder the architectural value of my new home, eliciting an outsider’s initial response to the treasures of this industrial jewel and its post-industrial glimmer. I was deeply honored, remembering that a few years ago, when I started teaching at Clemson University, I had written to the Lifestyle editor of the Greenville news with some editorial ideas. I was told that there wasn't much interest on architecture down there.

On Tuesday, we’ll take a stroll along a chosen path and engage in pedestrian conversation, my favorite line of discourse. I have chosen Queen Street (the cardo maxima of Lancaster's colonial plan). The theme of this walk will be "A Conversation with Fragments."

The central paradox of cities involves incongruities of time and space. On the one hand, cities offer virtual conversations between trans-generation artifacts. Two adjacent buildings, let’s say from 1860 and 1920, offer a conversation between the highest ideals of their respective generation. Postbellum America speaks to Jazz Age America and today's pedestrian can listen in. On the other hand, the conversation that cities offer is fragmentary. America's market-driven urban economy with its booms-and-busts guarantees that no single generation can fully manifest its vision. No generation can transform an entire city. Saint Petersburg, Versailles, or Haussmann's Paris cannot happen in the U.S., which is why we need fantasies of completeness at Colonial Williamsburg, Disney Land, Las Vegas, or the World's Fairs.

In any walk through an old American city, we only have the fragments of totalizing utopias incapable of fully transforming the urban organism. Each consecutive utopia materializes in parts before a different totalizing utopia picks up the fragments. To capture the conversational nuggets of this process as observers, we must cultivate a critical vision. Reading a city requires an idiosyncratic intellectual discipline, one that is spatially and temporally flexible. It does not require advanced education or specialization. The discipline of reading the city requires a categorical resistance to the simplistic binary of “progressive” versus “conservative” sentiments. The progressive invests in change, the future and a yet unrealized version of the present. The conservative seeks to conserve the moment, preserve the past and resist the unknown future. Both models have a simplistic notion of linear time (“pro-future” or “pro-past”) that does not take into consideration how cities and architectural ideas actually evolve. In order to talk about cities, we must substitute the redemptive Anglo-Saxon notion of teleological history with the richer Continental model of dialectical history. This does not mean that we have to all become experts in Hegelian dialectics. It is enough to accept the fragmentary nature of material culture and embrace the concept of Collage City (to use Colin Rowe's fundamental study from 1978).

Thinking of my upcoming conversation with Jen, I turn to a similar conversation between journalist Kurt Andersen and architectural critic Paul Goldberger. In "A City from Three Stories Up," (Studio 360, March 12, 2010) Goldberger walks with Andersen on the High Line, the most successful urban project of the last decade that opened in June, 2009. The High Line is a 1 1/2 mile urban park utilizing an abandoned elevated freight line line running along the West Side of Manhattan. The High Line was designed by James Corner (Field Operations), professor of landscape architecture at the University of Pennsylvania. Incidentally, Corner has been selected to design a similar park on Philadelphia's Delaware banks. For a review of the proposed plan (and its budgetary limitations), see Philadelphia Inquirer architecture critic Inga Saffron, "A Peerless Plan for a Philly Pier" (Changing Skyline, Feb. 19, 2010).

Godberger is the architectural critic for the New Yorker magazine and the author of a new book smartly titled Why Architecture Matters (New Haven, 2009). Although I often disagree with Goldberger’s criticism, I enjoyed Goldberger interview, especially his apt description of urban fundamentals. I quote his interview with Andersen:

“You feel layers of time in a city. I think that’s absolutely critical. A place in which you don’t feel time just somehow feels hollow. Even when the buildings are good, it lacks a certain kind of resonance and depth. Architecture is a conversation between the generations conducted over time. That’s really what a city is, in fact. On the other hand, we sometimes have come to make the opposite mistake today, which is that rather than disdaining history as old and worthless, to be thrown away like a paper towel, we sometimes sentimentalize it and over-romanticize it. We become trapped by it in a certain way and the victims of it. At the end of the day you really want a balance. The city has to keep doing new things to stay alive. A city is a living place. We don’t want to be Williamsburg on the Hudson [referring to NYC], Colonial Williamsburg that is not the other Williamsburg [in Brooklyn].”
Posted by KOSTIS KOURELIS at 7:28 AM